Yesterday, there was talk about Trump trying to pull an end-around to fire Special Counselor Robert Mueller.  Today, this was leaked to the press.

WASHINGTON — The special counsel, Robert S. Mueller III, has subpoenaed the Trump Organization to turn over documents, including some related to Russia, according to two people briefed on the matter. The order is the first known time that the special counsel demanded documents directly related to President Trump’s businesses, bringing the investigation closer to the president.

The breadth of the subpoena was not clear, nor was it clear why Mr. Mueller issued it instead of simply asking for the documents from the company, an umbrella organization that oversees Mr. Trump’s business ventures. In the subpoena, delivered in recent weeks, Mr. Mueller ordered the Trump Organization to hand over all documents related to Russia and other topics he is investigating, the people said.

The subpoena is the latest indication that the investigation, which Mr. Trump’s lawyers once regularly assured him would be completed by now, will drag on for at least several more months. Word of the subpoena comes as Mr. Mueller appears to be broadening his investigation to examine the role foreign money may have played in funding Mr. Trump’s political activities. In recent weeks, Mr. Mueller’s investigators have questioned witnesses, including an adviser to the United Arab Emirates, about the flow of Emirati money into the United States.

Here’s a few reasons why Mueller decided go ahead with a subpoena against Trump Organization.

The New York Times reports that this was served within the past few weeks.  If that’s the case, looking back at a tweet from February 27th, Trump’s “WITCH HUNT!” seemed a little weird, but there was chatter about something happening that day. Daily Check-In 02/27/2018 has a screenshot of the tweet in question.  Look for the Chessmaster Gary Kasparov.

At the time, I wasn’t sure what caused it, but chatter was that something had spooked Trump.  Claude’s tweet about Rick Gates delivering Trump seemed to just hang out there, but that with this story makes perfect sense.

Let me paint the picture…

Rick Gates has his Queen for a Day interview, and tells Mueller’s team everything he knows.  And I mean EVERYTHING.  Rick Gates knows how Trump Org works, how they work, who they work with, what they did, and when things happened.  Rick was the go-between for Paul Manafort and Donald Trump after Manafort left.  Rick Gates also worked with the Paul’s ties in Russia, Roger Stone’s connections, and Trump’s family.  Rick Gates gives Robert Mueller Trump on a silver platter.

Rick’s information corroborates information that Mueller already has on hand, but provides enough probable cause to go after Trump Org for specific documents.  Mueller’s team takes this and they serve Trump’s business with a subpoena.

Likely not the first one, either.  A few months back, Daily Check-In 8/16/2017 and Daily Check-In 8/15/2017, I reported about a rumor from Pesach Pace about Mueller serving Trump with two subpoenas.  This was before I tracked every story with a source or a screenshot, and Pace was new to me as a source.

This time it’s different.  Rick Gates delivered Donald Trump’s head on a silver platter.  Any attempts now made by Trump to get out of this just make it more painful for him.

I’m lumping all three of these big stories together as one, because they are one.

They tell the story about how the NATO-RUSSO war starts.  Years from now, we’ll ask “How did the war between the West and Russia start?” and we’ll point to this week as a possible starting point.  I would say it started with the rise of Putin in 1999, or Putin’s seizure of Hermitage Capital’s assets which led to Bill Browder’s tax lawyer Sergei Magnitsky’s ultimate demise, or the 2014 invasion of Crimea, or the 2016 Presidential Election.  But those will be the precursor events, like the Treaty of Versailles, the Beer Hall Rebellion, or Neville Chamberlain’s appeasement of Hitler were precursors of World War 2.

Russia’s attack on Sergei Skripal and his daughter on British soil with a chemical weapon of mass destruction feels like the straw that broke the camel’s back.  Great Britain, France, and even the feckless United States with Trump as President are repudiating the Russians.  France is joining the sanctions against Russia.  Australia will announce something soon.

The scariest part of all of this was an announcement from the Department of Homeland Security with proof that the Russians have penetrated critical infrastructure systems like the water system, power grid, and nuclear power plants, in the United States and Europe.

These actions are an Act of War.

The United States will be slow to react, as we’re dealing with removing the Russian Agents from our government.  We’ll be late to the party, but we’ll be there.

McMASTER TO BE REMOVED AS NATIONAL SECURITY ADVISER

This story is hitting the rounds.  Trump’s having another one of his tantrums and wants to do what he wants, but the adults in the room are stopping him for now.

If McMaster does leave, it will be through a promotion appointment to General.  That’s 4-star General, or O-10, per The Federal Pay website.  It’s the highest rank available in peacetime.  The salary is $15,583/month, or $186,996/year.

The reason for this is that they want to prove that not everyone’s reputation is destroyed for having worked in the White House.

This move might get delayed due to it leaking out, but it’s likely to happen before too long.

Out of the Cabinet Members, it’s easier to say who isn’t under investigation for or accused of abusing their position.  Here’s all of the Cabinet-Level people from the original list that aren’t either thieves, crooks, liars, bigots, or morally corrupted, that I know of.

That’s it.  Maybe we could include Alex Azar from HHS, but he’s not an original choice.

Everyone else is Dirty AF.  Even when including Cabinet-Level positions, I can only add a handful of names, and even those are more “haven’t heard anything YET” than they’re clean as a whistle.

I grew up in the Pre-Columbine world.  School shootings happened, but they were few and far between, and either occurred because some crazy kid got his hands on daddy’s hunting rifle, or some little gang-banger brought a handgun to school to settle a score.  I didn’t have to deal with lockdown drills, or metal detectors in school, or armed guards patrolling the hallways looking for some menial violation to report to justify their existence.

So, when I saw the #walkupnotout hashtag and meme, I damn near lost my shit.

This meme is an attempt to blame students for being shot at, by saying that the shooters are doing this because they were bullied so bad, they had no other choice but to murder their classmates, and if only those kids had listened to them, they’d be alive today.

Not only does this mentality completely ignore that Parkland, Sandy Hook, and many other schools were shot up by non-students, but the logic they use is nothing more than victim blaming.

You know, like blaming a rape victim for dressing too provocatively or nor accepting the advances of the creepy guy at the bar who wouldn’t leave them alone.  Oh, if only she went on a date with the creepy guy, he wouldn’t have raped her.

This meme is like blaming the shopkeeper for getting shot by thug who din’t get hired to be the cashier because they can’t count.

Besides, this meme completely avoids talking about guns, because admitting that guns are the problem scares them.

The children are taking the lead because their parents, their politicians, failed them.  We failed to protect them.  Now, we’re trying to blame them for our failures.

We’re telling our children that not only are we not going to do anything to protect them, but that it’s their fault that they’re being killed because they weren’t nice enough to their fellow students, as though walking up to and hugging someone with an AR-15 in the middle of a shooting is the smart thing to do.

The children are taking the lead because we failed them.  There’s still time to make it right.

PA-18: LAMB, SACCONE TO RUN IN DIFFERENT DISTRICTS THIS FALL

It’s all over but the crying.  Conor Lamb has basically won, but it sounds like the NRCC is trying for a recount. 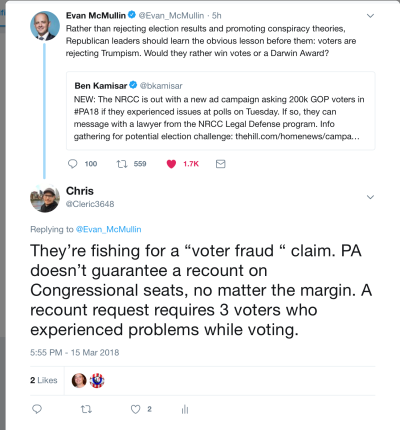 PA law doesn’t have automatic recounts for congressional districts, and a request for a recount requires at least three voters who experienced some difficulties from voting to file a lawsuit.  The NRCC is going on a fishing expedition.

As far as this fall for the midterms, with the redistricting, both Lamb and Saccone will be in different districts.  PA-18 will be Pittsburgh and Southern Allegheny County, which will likely be left to Mike Doyle.  Lamb will run in PA-17, which is Beaver County and the rest of Allegheny County.  Rick Saccone will run for the new PA-14, which is Greene, Fayette, Washington, and most of Westmoreland counties.

Cleta Mitchell is listed in the Minority Status Report that I’ll talk about over the weekend.

Cleta Mitchell: Ms. Mitchell, a partner at the law firm Foley & Lardner LLP, conducted work for the National Rifle Association (NRA) and may be able to clarify for the Committee any Russian-related approaches to and interaction with the organization and persons of interest to the Committee during the 2016 election.

Could California Effectively Restore Net Neutrality for the Entire Country?

Trump boasted to donors about making up facts during talks with Trudeau: report

Trump, Who Talks About Executing Drug Dealers, Vouched For Two of Them He asked a judge to show mercy to the boss of a group smuggling cocaine into middle America who Trump deemed ‘a credit to the community.’

Ukrainian activists being censored by Facebook through Russian Trolls

RUMOR MILL:  DONNIE JR. GETTING DIVORCED AND THE THREE GENERALS

Vanessa Trump is divorcing Donald Trump, Jr.  Rumor has it that she found out he was fucking a bunch of Russian hookers.  Another rumor says that they’re trying to use this as a method of moving assets to avoid having them seized.  Last one is that she’s getting out while the getting’s good.

One last thing about McMaster.  He’s one of the Three Generals that Trump surrounded himself with due to his fetish with power.  The Three Generals, meanwhile, are loyal to the Republic, not Trump.

McMaster, Kelly, and Mattis.  They’ve put up with the unbearable to protect this country and to keep Trump at bay.  When they leave, it’s end game.  I don’t know what that entails exactly, but the three of them don’t leave their positions until Trump is out.  Hell, I’ve made the case a few times before about how Mattis could even become President.  I am not a fan of a General becoming President, especially without an election.  But, if it’s a stewardship role, where he serves for the remainder of the term while we as a country unfuck ourselves from the Russian mess, I’d be open to see how he does.

That’s it for today.  I’ve got a feeling that Friday is going to be nuts.  I wouldn’t be surprised if some indictments are unsealed tomorrow.  If that happens, I’d expect that to happen by 11AM EST.  Which means, of course, 5:59 PM EST will see a fuckton of activity.

Thank you, and a have a good one.