Tuesday February 27th, and it’s been a busy day.

The U.S. Intelligence Community has confirmed the Russians compromised, or got into, the voter registration websites and/or voter rolls of the following states:

Once again, compromised means that the IC has proof that the Russians got into the systems.  They won’t say that they have that any information was changed, but I’ve covered in Voter Rolls – The Easy Target what and how they could have made changes without getting caught.

Jared Kushner, White House Senior Advisor and son-in-law of Donald Trump, has lost his Top Secret Intelligence Access.  This means that he can no longer have access to the Presidential Daily Briefing, nor be involved in high level tasks that require that access.

KUSHNER FAMILY ATTEMPTS TO BUY OUT PARTNERS FOR 666 FIFTH AVENUE

This part was pretty interesting…

Kushner Cos. had sought financing from a Chinese insurer with ties to the ruling Communist Party early last year, drawing criticism from government ethics experts and Democrats in Congress who worried the Chinese could use any deal as leverage with the Trump administration. The Kushner Cos. also sought money from a South Korean government fund, a French billionaire and a Saudi investor.

Kushner has a $1.2 Billion debt that comes due next January.  How in the Crystal Pepsi Flavored Fuck would they get the money?

Particularly Manipulable.  That’s how Jared Kushner is described.  He’s in debt up to his ears, is not qualified to meet with foreign diplomats, and has been caught describing his personal business with representatives from Mexico, China, United Arab Emirates, and Israel, among others.

H.R. McMaster, President Trump’s national security adviser, learned that Kushner had contacts with foreign officials that he did not coordinate through the National Security Council or officially report. The issue of foreign officials talking about their meetings with Kushner and their perceptions of his vulnerabilities was a subject raised in McMaster’s daily intelligence briefings, according to the current and former officials, who spoke on the condition of anonymity to discuss sensitive matters.

Officials in the White House were concerned that Kushner was “naive and being tricked” in conversations with foreign officials, some of whom said they wanted to deal only with Kushner directly and not more experienced personnel, said one former White House official.

Jared Kushner is being accused of using his official position for personal gain in an effort to relieve his family’s debt.  In doing so, he’s selling America’s interests down the river.

THE PROFESSOR AND RUSSIAN FOREIGN MINISTER LAVROV ARE FRIENDS, PER BABY MOMMA

Remember Joseph Misfud, the professor that took an interest in George Papadopoulos after learning about his ties to Trump?  After George’s plea deal, the Professor disappeared.

He’s disappeared so well even his baby momma doesn’t know where he’s at, and she wants to know.

She provided a journalist with screenshots of WhatsApp conversations where he claimed to have dinner with his friend Sergei Lavrov.  You know, the Russian Foreign Minister.

She also showed a message saying that he talked with the FBI.

It’s been a couple months since she’s heard from him.  At this point, Misfud is either on the run, in protective custody, or dead.

NO HOPE OF HICKS ANSWERING QUESTIONS FOR HOUSE INTEL COMMITTEE

Okay, that’s a bad pun.  As I expected, she refused to answer questions, and the Republicans on the Committee won’t do a damn thing about it.

But don’t worry, she did talk to Mueller… 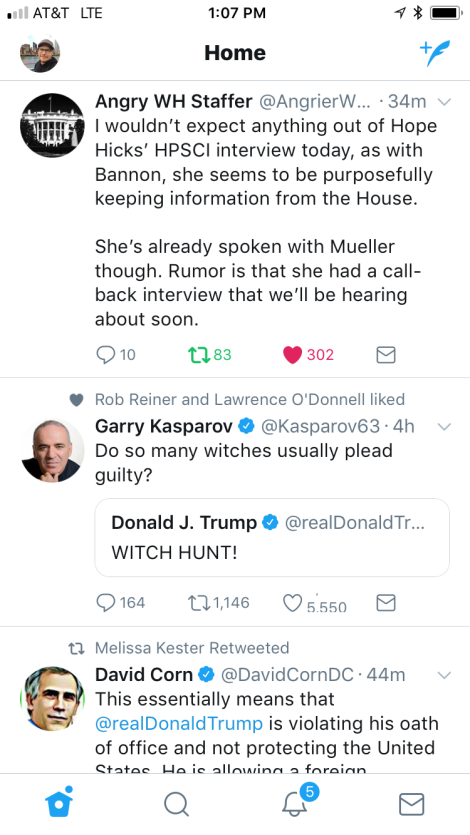 So, here’s hoping that works out…

Neither President Trump nor Secretary of Defense Mattis has ordered the NSA to enact the protocols set forth to protect the United States from another attack from Russia.  Mattis cannot unilaterally act without orders from Trump.

Back in Daily Check-In 02/02/2018 I mentioned that Senator Wyden sent a letter to the NRA asking for financial documents relating to Russia.  They responded today by attacking Wyden for going after the Second Amendment and some of their other talking points.

This one’s a bit weird.  The Trump Panama Hotel is a money laundering front that now sits mostly empty because of all of the scrutiny now being shone on it.

The majority owners want Trump’s team out, and they’re asking the Panamanian government for help.

Trump’s team locked themselves in an office and the server room.  Yesterday, they spent the whole day shredding documents. Today, the security guard was arrested and removed from the building.

Fuck Alex Jones, he deserves every horrible thing that can come his way.

After releasing a video where InfoWars attacked the Parkland students, YouTube blocked their account for two weeks, and sent them a little warning. 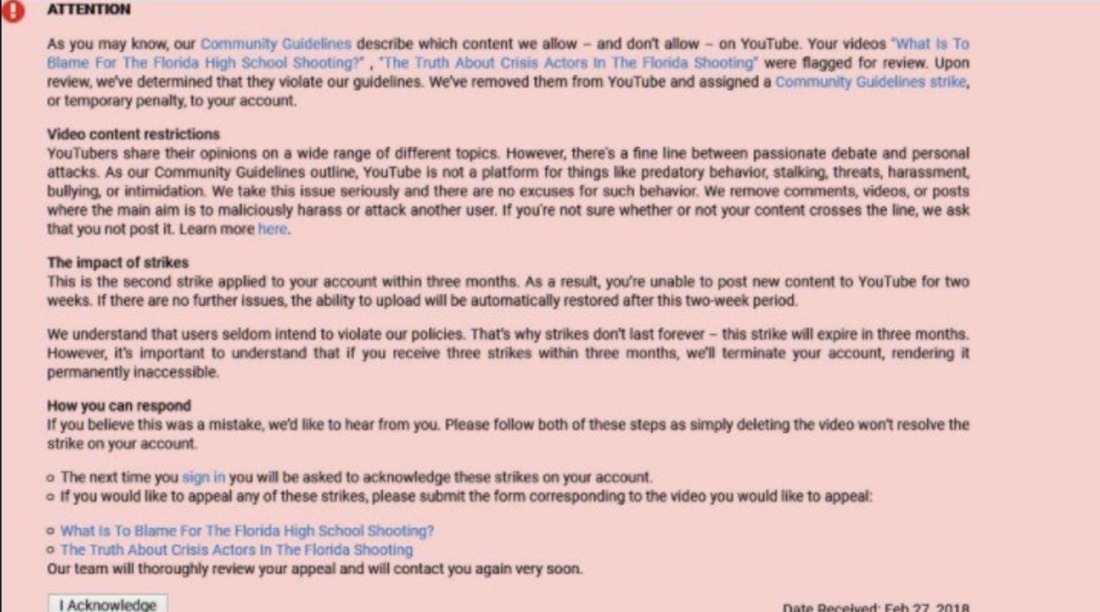 This is their second strike, and they’re blocked for the next two weeks.  If they get another one in the next three months, no more InfoWars on YouTube.

Brad Parscale, of Cambridge Analytica and Trump’s digital guru through the 2016 election was named the reelection campaign manager.

Brad has already been interviewed by Mueller, and Cambridge Analytica is knee deep in Russian shit.

I wonder how long until he’s tied to some more shady ass shit.

Oh, for fucks sake, that was like twelve minutes.

Parscale sold his marketing company to a firm that is involved in felony stock fraud crimes.  They’re a penny stock company that pumped their stock values for a quick buck.

Check out the movie Boiler Room.  This was the main scheme they used to generate money.

Robert Mueller recommended that 20 plus charges that he filed against Rick Gates be dropped due to his cooperation.  They’re also letting Rick go on spring break to Boston.

Hot damn.  Mueller would only do this if he liked what Rick gave him.

By the way, Rick worked with Brad Parscale on the America First policy company.

Democrats sued Scott Wilson for not holding special elections to fill empty seats in the state legislature for fear of losing seats to Democrats.

Obama said they “have to have a conversation about their business model that recognises they are a public good as well as a commercial enterprise.”

Yes, yes we do need to have that conversation.  We should be having conversations about regulating Social Media, and to what scope.  Personally, I’m in favor of verifying identities to these companies, but allowing anonymity amongst the users.  I’m okay with arguing online with someone named BigDickNickFoles, as long as I know that BigDickNickFoles is a real human.

MELANIA SEVERS TIES WITH ADVISER CAUGHT UP IN INAUGURATION SCANDAL

This was in response to the news that came out about her friend and adviser making $26 million for very little work.  The explanation makes sense, but I’m not buying the “Melania is innocent” routine.

Yep.  I wondered when that was going to happen.

Ben’s wife ordered a dining room table for $31,000, and looked for a way for it to be ordered without requiring approval.  This came on the heels of budget cuts in the Housing and Urban Development.

CAN TRUMP BE INDICTED AS PRESIDENT?

Soon, it’ll be Roger’s time in the barrel.

One of the footnotes talks about a case where the FBI flat out called Carter Page a spy.

NASTYA RYBKA ARRESTED IN THAILAND, OFFERS INFORMATION ON DERIPASKA AND MANAFORT FOR HER RELEASE

Nastya was the woman in the video that leaked from Oleg Deripaska’s boat which Alexei Nalvany posted showing a connection between Deripaska and the Russian Government, and how this was connected to the attack on America.

She’s scared and she wants to talk.

The Keebler Nazi announced this as the news about Jared Kushner came out.  Jeff Sessions is running interference for Trump.

This would explain why Mueller’s okay with Gates going on a trip to Boston.

Remember, take the above with a grain of salt.

That’s it for today.  It’s been a bit crazy, and will get crazier going forward.  With Kushner under a microscope and looking like a virus, Roger Stone’s ties to Julian Assange and Russia coming to the foreground, and both of them tied to Manafort and Gates, I wouldn’t be surprised to see Roger being the next principal that gets indicted.

Maybe tomorrow will be a little less chaotic.  That being said, I’m ready to drink from the fire hose.