“Today is the day that I am getting my freedom back,” Cohen told U.S. District Court Judge William Pauley, a Bill Clinton appointee who minutes later handed down the prison sentence. “I have been living in a personal and mental incarceration ever since the day that I accepted the offer to work for a real estate mogul whose business acumen that I deeply admired.”

Ouch.  I wonder what the Special Counselor’s team had to say about Michael Cohen.

Special Counsel’s Office prosecutor Jeannie S. Rhee said that Cohen provided “credible” and “valuable information” regarding “any links between a campaign and a foreign government.” “Mr. Cohen has sought to tell us the truth,” Rhee said. “There’s only so much we can say about the particulars at this time, given our ongoing investigation,” Rhee said.

Lordy, lordy, lordy.  Former Deputy Finance Chair of the Republican National Committee and personal attorney to President Donald J. Trump Michael Cohen has been sentenced to 3 years in federal prison for tax evasion, campaign finance violations, and lying to Congress.  But that’s not the interesting part.

What’s interesting is that the makings of a solid case against Donald Trump exists for multiple felonies, and SDNY sounds like they’re ready to pull the trigger on going after his orange ass.  And that might be the least of his problems.

First, Cohen directly said that he committed the campaign finance violations and related tax evasions, at the direction of and in coordination with Donald Trump.  The main crimes he was charged with was organizing payoffs for Karen McDougal and Stormy Daniels back in 2016.  These payoffs used campaign money to keep these women quiet about affairs with Trump back in 2005.  In both cases, money was laundered from the Trump Presidential Campaign through middlemen to the women with the caveat that they couldn’t talk about their experiences.  Karen’s payoff went through AMI and the National Enquirer, while Stormy’s went though an LLC that Cohen set up for this specific cause, Essential Consultants LLC.  That last one bit Cohen in the ass when he used that shell company for selling “access” to the President as a lobbyist of sorts.  (Daily Check-In 11/29/2018, Daily Check-In 12/11/2018, Daily Check-In 08/21/2018, Daily Check-In 01/12/2018)

Next, David Pecker and AMI, the publishers behind the National Enquirer, are cooperating with federal prosecutors in exchange for immunity from the Cohen case.  Pecker has a safe full of embarrassing info on Trump which included the McDougal story.  It’s almost a certainty that Pecker gave the Feds the contents of that safe so he could walk away. (Daily Check-In 07/27/2018)

How does this get worse for Trump? 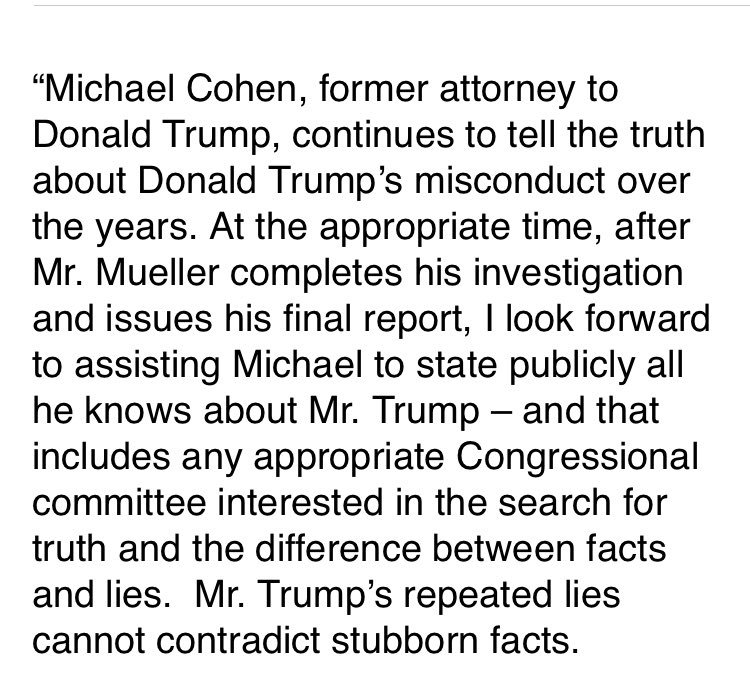 Michael Cohen was in the room where it happened.  He organized, handled, and coordinated activities between the Trump Organization, the Trump Campaign, and all of the ne’er-do-wells that wanted to work with them, like the Russian government, Cambridge Analytica, or the National Enquirer.  And he’s willing to testify before Congress about all he knows.

Trump’s not the only person shitting bricks right now.  One of Cohen’s other clients spent most of the day deleting tweets.  Sure, it could be completely coincidental that a man whose lawyer was getting sentenced in federal court tried to delete tweets that tied him to various efforts to obfuscate his dealings, but if you believe that, I’ve got a bridge in Brooklyn for sale.

U.S. Attorneys said in no uncertain terms that Donald Trump committed crimes with Michael Cohen.  They can’t say that unless they’ve got the proof and are ready to use it.

Remember when Cohen’s shit was seized, and there was this big hubbub about Cohen recording all of his conversations with Trump?  Only a small fraction of Cohen’s work was deemed as privileged information, and then Trump blows up his confidentiality anyway.  The feds have those recordings.

Something that gets lost in the shuffle with this whole “Lying to Investigators” story is the caliber of the lie.  They’re not bringing criminal charges for forgetting that he sent an email when he said he didn’t, or said he ate steak when he had chicken, or lied to his buddies about banging some chick he brought home from the bar when instead he went home and jerked off to the underwear section of the weekly Walmart ad.  No, they caught him lying repeatedly in the same conversation about a pretty big deal.  It’s akin to asking a husband if he cheated on his wife and he said no a dozen times, even though he was a dumbass and streamed it to PornHub.

What freaked out the investigators the most was that here was the fucking NATIONAL SECURITY ADVISOR TO THE PRESIDENT OF THE UNITED STATES.  They should be on the same side.  And Flynn was the head of the DIA, one of the major intelligence organizations.  Being the head of an intel group should make him paranoid AF.  Instead, the thought never crossed his mind that someone might be bugging the phone line of the Russian Ambassador right after all of the national intelligence organizations signed on to a report that they attacked the United States.  And cops, feds, and investigators don’t like to ask questions they don’t already know the answer to.  If Flynn said “Yeah, I talked to that fat fuck and told him to chill the fuck out and let’s talk when DT’s in house”, then the investigators would be cool with that.  Instead, Flynn lied when he didn’t have to lie, and dug himself even deeper.  When they looked into his story more, they uncovered a trash pile of treasonous activities.

Looks like we’re waiting until Thursday to hear from Red Sparrow.

Simona says she is looking forward to pursuing a Hollywood career now that she and her man are ‘at the end, I hope, of a dark period’. She’d already landed a part as Brigitte Bardot in an unfinished film called Affairs on Capri, directed by a British man called Paul Wiffen.

Wiffen, it turns out, is the former Chairman of UKIP London, a contributor to Russia Today, a fierce opponent of George Soros, and somebody who once attended a party with Anna Chapman, the former Russian intelligence agent turned media personality. That background will do nothing to quell rumors that somehow Simone Mangiante Papadopoulos is part of a sinister Kremlin plot

Funny how it is the international relations expert from Italy who speaks with a Russian accent and lied on her passport suddenly thinks that she’s an actress, and is staring in a play financed by someone with suspicious ties to Russia.

On second thought, scratch that.  This suddenly makes sense.

NEW YORK, EMOLUMENTS, AND THE OTHER LAWSUITS

People underestimate these calls for violence, but think about it like this.

A puppet madman dictator wannabe with delusions of grandeur and has rallied the most deplorable members of society to his cause while creating a cult-like atmosphere of fanatical dipshits who, coincidentally, are both afraid of everything and armed to the teeth, calls upon his cult to rise up and attack those who seek to unseat Dear Leader from his golden toilet.  Do we forget the MAGABomber? (Daily Check-In 10/24/2018)

This is why when the case is made to remove Trump, the worst and most vile evidence has to be released.  There will still be some crazies out there, but the first step to avoiding violence is breaking the will to do so.  Nothing will do that quite like treason, theft, ties to murder, human trafficking, and pedophilia.

That’s it for Wednesday.  Damn.  Thursday’s gonna be busy too, with Butina pleading guilty to conspiracy and the like.  Plus, we’re hearing that Mueller is looking into Trump’s ties in the Middle East.  Makes the Grand Bargain sound more likely all of the time.

The walls are closing in, and things are accelerating.  We’ll probably get a lull around the holidays, but the stream of incoming news feels like it’s accelerating to something big.  Something that will shake people to their core.  Remember, most people aren’t paying attention to the details and only get a piece of the picture.  Once they get all of it, things could get ugly.  Hopefully, it’ll get ugly in a good way.