“In an interview, Stone insisted that the topic of hacked emails was never broached in the Aug. 3 phone call—or in any other communication with Trump,” according to the Post. “It just didn’t come up,” Stone said. “I am able to say we never discussed WikiLeaks. I’m not sure what I would have said to him anyway because it’s all speculation . . . I just didn’t know if it’s true or not.” Stone’s call most certainly remains circumstantial evidence, but the circumstances seem to be closing in on Trump. The calls do not put Trump in the driver’s seat of the WikiLeaks releases by any stretch, but they certainly put him much closer to the action and potentially giving him knowledge of the looming release of more damaging emails.

For reference, here’s where that Aug. 3rd call fits into the timeline of the WikiLeaks releases.

July 25th—Roger Stone emailed Jerome Corsi, according to the draft of the Corsi plea deal, after getting word that another WikiLeaks email dump was in the works. Stone had received a forwarded email from Fox News reporter James Rosen stating: “Am told WikiLeaks will be doing a massive dump of HRC emails relating to the [Clinton Foundation] in September.” Stone then emailed Corsi. “Get to [Assange] [a]t Ecuadoran Embassy in London and get the pending [WikiLeaks] emails . . . they deal with the Foundation, allegedly,” he wrote.

July 27th—Two days later, at a news conference, Trump mockingly asked Russia aloud to release a cache of Clinton emails. “Russia, if you’re listening, I hope you’re able to find the 30,000 emails that are missing… I think you will probably be rewarded mightily by our press. Let’s see if that happens. That’ll be next.” That same day, Russian hackers made their first attempt to access the Clinton private server, according to the Mueller indictment of Russian intelligence officers allegedly involved in the cyberattack.

Aug. 2nd—Corsi emails Stone following up on the potential WikiLeaks email dump. “Word is friend in embassy plans 2 more dumps,” Corsi wrote, according to the draft filing. “Impact planned to be very damaging. . . . Time to let more than [Clinton campaign chairman John Podesta] to be exposed as in bed w enemy if they are not ready to drop [Clinton]. That appears to be the game hackers are now about.”

Aug. 3rd—Stone says he spoke to then-candidate Trump on the phone.

It’s far from ironclad, conclusive evidence, but all of a sudden it just got pretty smokey in here.

They lied.  About all of it.  Not that that’s a surprise to anyone here, but they were behind the coordination of acquiring the mails and their release, as well as trying to cover it up with a story about Seth Rich.  The same guy that Fox News was sued over. ( Daily Check-In 8/3/2017)

9/14 – Manafort cuts plea deal, agrees to cooperate At some point after this, Mueller discovers that Manafort’s lawyer is briefing Trump on what is being asked by Mueller

11/20 – Trump submits answers to Mueller. In other words, Mueller has Trump’s version off events related to the campaign and Manafort.

11/26 – Mueller reveals Manafort has repeatedly lied throughout the process and “committed federal crimes.” That’s definitely lying to the FBI, but were the lies part of a conspiracy to obstruct justice?

BREAKING from me/@NatashaBertrand: An explosive letter has been sent to Schiff’s office claiming that Papadopoulos coordinated with Russians with Trump’s knowledge in the weeks following the election. Authorities are taking the letter “very seriously”

Here it is, folks. We had to redact portions of the letter as to not give away any details about the Papadopoulos confidant. It’s real, and federal authorities are investigating thoroughly. 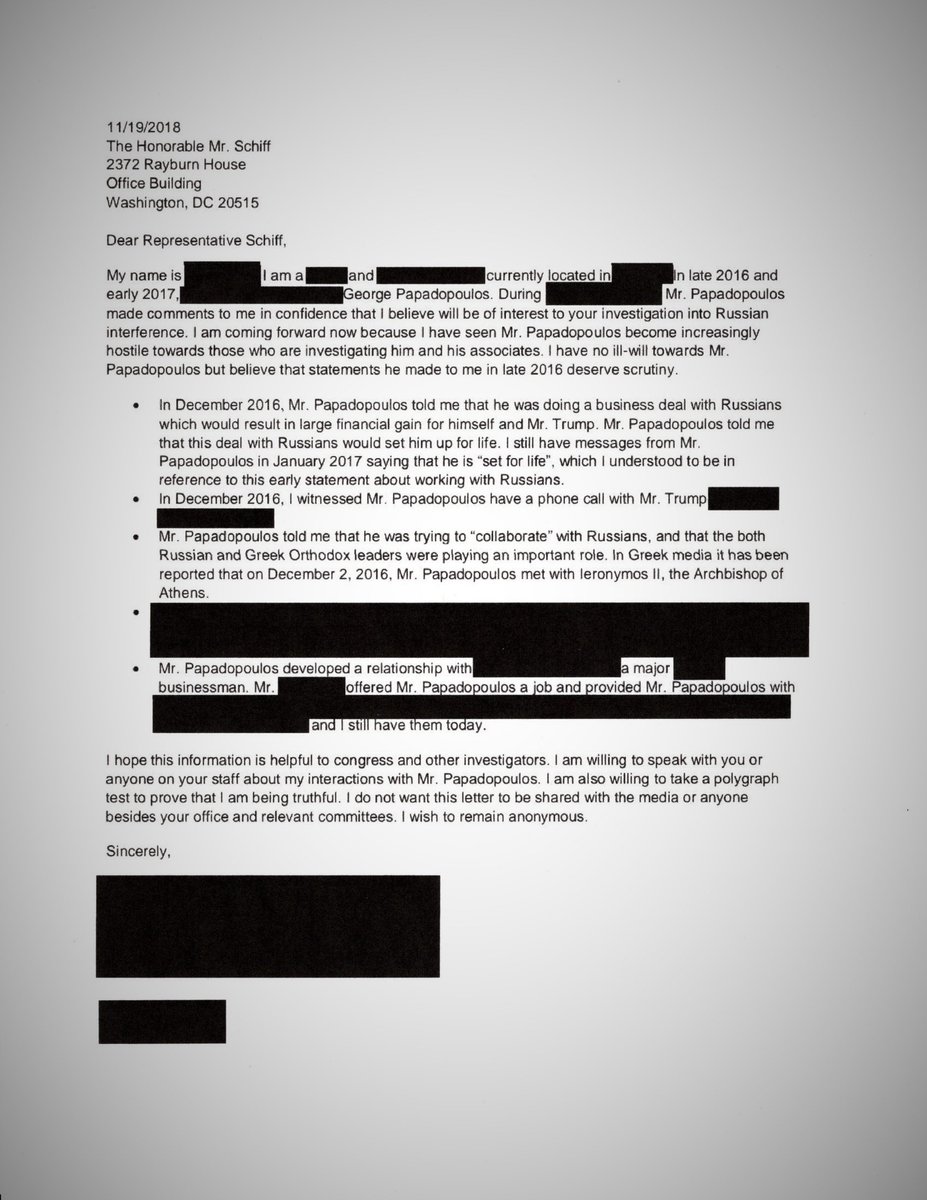 I want to posit another form of setup – different motive. Let’s say this is Putin in origin. You know the Ukrainian branch of Orthodox Christian Church recently broke off from the Russian branch. You also know Russia’s chafing at the bit for open war against Ukraine.

So we have two Putin-loyal branches of the church mentioned in this letter as collabwith Papadop and the Trump plot – the Greek and the Russian. What if (just brainstormin) US or allied intel is being baited to target these churches in some way, so it can be blamed on Ukraine?

Then Russia could roll out troops under a holy war, defend the church angle.

The beauty of this is that George is in prison for two weeks, so he can’t trip over his own two feet on Twitter trying to refute this by exposing even more of his crimes.

Also, the story mentioned a very interesting tidbit about Mrs. Papadopoulos.  Turns out she worked for The Professor.  You know, the one that went missing.  She worked for Mifsud when he was talking to George, and encouraged Simona to talk to George.  Seems kind of weird that the Kremlin Agent hired an “Italian” woman to work for him in Britain, while he was courting an American working for a Presidential Candidate.

Let’s talk about Trump testifying that he did not know about the Trump Tower meeting. [THREAD]

NEW: Donald Trump told Robert Mueller in writing that Roger Stone did not tell him about WikiLeaks, nor was he told about the 2016 Trump Tower, according to two sources familiar with the matter. https://cnn.it/2Qo9ZRT

1/ The email about meeting with the Russians was part of a group thread that included Junior, Kushner, and Manafort. The subject of the email made the purpose of the meeting (dirt on HRC) unambiguous.

2/ The Russians sent an attorney who was a known Putin operative, an FSB translator, and a money laundering specialist to the meeting.

3/ The meeting was coordinated in part by the Agalarov family, who are tight with Trump.

4/ Reince Priebus was at Trump Tower when the meeting took place. The thinking is that he was there to make Trump not go into the room physically, although that part is just speculation.

5/ When the Russian party arrived at Trump Tower, they were greeted warmly by Ivanka Trump.

6/ The Trump Tower meeting was attended by Junior, Kushner, and Manafort—Trump’s son, son-in-law, and campaign chair—and Ivanka knew about it on the day of the meeting at the latest.

In spite of all of this, we are supposed to believe President Control Freak didn’t know? If you believe that, I have some Trump steaks to sell you. [END]

And not only that, the Agalarovs sent Trump a gift the day after the meeting; something they’d been doing at various “milestones” during his candidacy.

This shitshow’s gonna get a lot weirder before it’s over.

I debated putting this in other sections, but ultimately settled for here because TRUMP IS INVOLVED IN FUCKING TEEN AND PRE TEEN GIRLS.  He is going to get dragged through the mud on this.  And as fucked up as the MAGA crowd is, a lot of them have daughters, or grand daughters, or nieces.  Hearing tales about how Trump took part in Jeffrey’s “Parties” might finally be the straw that broke the camel’s back.  Treason’s okay for them, stealing and lying are just “being smart”, but a grown ass man forcing himself on a young girl is beyond the pale.

There’s been tales of his behavior for a while, and I’ve covered some of it before.  There’s the interview with a golf magazine where they board his plane waiting for Jeff (Daily Check-In 11/30/2017)

In 2000, Corcoran was a guest on Trump’s 727 that weekend, and he wasn’t the only one. The article published in Maximum Golf magazinenotes Trump had to wait at the marine terminal for now-disgraced pedophile billionaire Jeffrey Epstein and his society gal-pal Ghislaine Maxwell—who have since been accused by dozens of women of running what amounted to a “sex slave” ring. Corcoran, who didn’t know the pair at the time, remembers Trump standing in the doorway of the plane yelling to them, “You broke the cardinal rule, Jeffrey! Never be late for someone else’s plane!”

Though not mentioned in the article, Corcoran now recalls a young woman boarding with them. “I honestly couldn’t guess her age, but she was young made up to look a bit older,” he says, adding that nothing “untoward” happened during the flight.

Trump’s friendship with Epstein isn’t news. Before the mysterious financier was jailed for operating a sexual pyramid scheme where he allegedly paid minors around $200 for sexual massages that included groping and rape, Epstein was a regular at Mar-a-Lago and had, according to a sworn deposition from Epstein’s brother, ferried the future president at least once on his plane. It has never been reported that Trump returned the favor.

“It is even said that he likes beautiful women as much as I do, and many of them are on the younger side,” Trump said at the time.

There’s also the Jane Doe deposition. (Daily Check-In 05/24/2018)  It alleges that Epstein and Trump molested her, raped her, and threatened to kill her if she told anyone.  This lawsuit was filed a couple times in New York, but was ultimately withdrawn in November 2016 following multiple death threats.

A trial is set for December 4th.

Remember those indictments about the Ad Scam I talked about yesterday? (Daily Check-In 11/27/2018)  Those are the arrests CC’s referring to.

Speaking of yesterday, here’s the tweets that go into detail about how the Corsi document might be a forgery.  Stay frosty.

Organized crime. The reason phony “Bolivarian” dictators in Latin America are nothing more than glorified drug Kingpins, why families flock to our Southern borders. It’s the reason why Education is broken, why public schools might use one software application over another. 2/

Organized crime. It’s the reason we have banks that are “too big to fail”, housing market crashes and IMF leadership who seem like extras in “The French Connection”. 3/

Organized crime. The reason why one film gets financed and another does not. The reason social media narratives come and go at the drop of a hat. The reason loud protest groups are able to spontaneously generate. 4/

Organized crime. The reason Native Americans are held hostage on their own reservations, why public lands are fought over, why corruption exists in the BLM and the Bureau of Indian Affairs, why the Kochs haven’t been sentenced to prison for Life. 5/

Organized crime. It touches each and every one of us, whether we know it or not. And this year, it has met its match. 6/ < END >

That’s it for Wednesday.  Things are accelerating.  I’m sure at any moment, things will slow down long enough to digest them.

NARRATOR: They didn’t slow down.

It’s not even noon, and I haven’t launched Twitter yet.  Thursday’s gonna be LIT!!!

Ok, I will never say that again.  Until the next time.