A lawyer for Paul Manafort, the president’s onetime campaign chairman, repeatedly briefed President Trump’s lawyers on his client’s discussions with federal investigators after Mr. Manafort agreed to cooperate with the special counsel, according to one of Mr. Trump’s lawyers and two other people familiar with the conversations.

The arrangement was highly unusual and inflamed tensions with Mr. Mueller’s office when prosecutors discovered it after Mr. Manafort began cooperating two months ago, the people said. Some legal experts speculated that it was a bid by Mr. Manafort for a presidential pardon even as he worked with the special counsel, Robert S. Mueller III, in hopes of a lighter sentence.

Donald Trump’s former campaign manager Paul Manafort held secret talks with Julian Assange inside the Ecuadorian embassy in London, and visited around the time he joined Trump’s campaign, the Guardian has been told.

Sources have said Manafort went to see Assange in 2013, 2015 and in spring 2016 – during the period when he was made a key figure in Trump’s push for the White House.

It is unclear why Manafort would have wanted to see Assange and what was discussed. But the last apparent meeting is likely to come under scrutiny and could interest Robert Mueller, the special prosecutor who is investigating alleged collusion between the Trump campaign and Russia.

A well-placed source has told the Guardian that Manafort went to see Assange around March 2016. Months later WikiLeaks released a stash of Democratic emails stolen by Russian intelligence officers.

holy hell. Paul Manafort held secret talks w/ Julian Assange in the Ecuadorian embassy in London in late March 2016. The month before (2/29/2016), he reached out to Trump via Tom Barrack to pitch himself as campaign chair. He was hired in March. Unpaid.

Roger Stone was the one who convinced Trump to hire Paul Manafort. The idea of hiring Manafort to work unpaid? That was Roger Stone’s idea. This took place at some point in March 2016. The same month Manafort met with Julian Assange.

Ohhhhh@JuddLegumhas a very good brain & an excellent memory Scenario A: Manafort “flipped” to be Trump’s inside eyes & ears Scenario B: Prosecutors had Manafort on the lies they blew up the cooperation agreement Scenario C: A + B = C Scenario D: Manafort hiding something big

News that Manafort lied to Mueller reminds me of this story from last month. Even after the plea, Manafort stayed in touch with…

Meaning none of us really know. Anyone who says they have a inside source in Mueller’s team – they are totally lying to you. Mueller doesn’t leak, ever. He only speaks in legal filings. Hence we will know shortly what Manafort lied about So stay skeptical & frosty

Turns out I’m not the only one who’s thinking about the different layers a foot. 1) Flynn & Gates terminated their joint defense agreement with Trump 2) Manafort never did 3) @AshaRangappa_is WAY smarter than I am, so don’t take my word for possible scenarios, listen to her

First, remember yesterday I talked about a rumor floating around about Manafort keeping the joint defense agreement in place and used this to coordinate answers? (Daily Check-In 11/26/2018)

I’m amazed, actually.  I’m amazed that not only did this hypothesis work out, but that at no point in this process did Manafort, Trump, or any of their lawyers say “Gee, isn’t it ironic, don’t ya think?”  Of course, this isn’t irony, but peculiarity.  At some point, none of these people stopped to ask “Why would Mueller and his team of legal eagles let us keep the defense agreement in place?  They made Rick Gates and Mike Flynn drop out.  Don’t they know that Manafort’s team will brief Trump the first chance they get?  This is either a colossal fuckup or a trap.”  If nobody stopped and said that this whole deal smelled fishy, then they might just be the most self-centered, sociopathic, narcissitic…

Now that I think about it, this makes perfect sense.  It was a well-laid trap, and probably telegraphed from a mile away because of Manafort’s insistence that he be allowed to stay part of the joint defense agreement.  Mueller and his team saw a possible opening, and gave him four things.

I’d put $10 on Mueller using a canary here.  They briefed Manafort on a specific action they were going to take, or question they needed answered, and suddenly Trump’s team has the exact same info.  Meanwhile, what they told him was an easily provable lie, and Trump puts it down in a sworn statement.

The fucked up thing is, that might not even be the biggest Manafort story of the day.  The Guardian releases a story that Manafort met repeatedly with Julian Assange in the Ecuadorian Embassy, including once in March 2016 AFTER he offered to join the campaign.  Remember, he was brought on at Roger Stone’s insistence.  March 2016 was also after the DNC and Podesta hacks, too.  The GRU had the mails at this point, and were looking for a way to use them.  I don’t know if Assange knew that GRU had them before this meeting with Manafort or not, but he definitely knew after.  Either Manafort told Assange of their existence, or Manafort confirmed their existence with him.

Manafort was neck deep in  Wikileaks and Russia throughout the campaign, but most of it was at a distance, through intermediaries.  This puts Paul in the same room as a cutout for Russian Intelligence.  The same cutout that later passed on stolen information.

This creates a direct line between the hacked emails and Trump knowing about their existence before the June 9 meeting.

Speaking of conspiring with the Russians, here’s Roger and Jerome.  They took over the coordination of releasing the mails when it got too hot for Paul Manafort to do it himself.  That’s the problem with being the campaign chairman for the President: everyone knows your name.

Also, I don’t trust that statement of offense from Corsi.  Something feels off about this.  I don’t trust anything Corsi releases, and this just feels like a plant.  It could be an early draft that somehow made it’s way to Jay Sekulow in a brown envelope, but there’s something fishy about this.

Spicy agrees in this thread.

Take everything coming from Corsi/Rudy/Roger with a salt lick.  We need more than a grain for this shitstorm.

LOOK AT THEIR NAMES. LOOK AT WHERE THEY WERE ARRESTED. 2 International Cybercriminal Rings Dismantled & 8 Defendants Indicted for Causing Tens of Millions of Dollars in Losses in Digital Advertising Fraud Global Botnets Shut Down Following Arrests 1/ https://www.justice.gov/usao-edny/pr/two-international-cybercriminal-rings-dismantled-and-eight-defendants-indicted-causing … 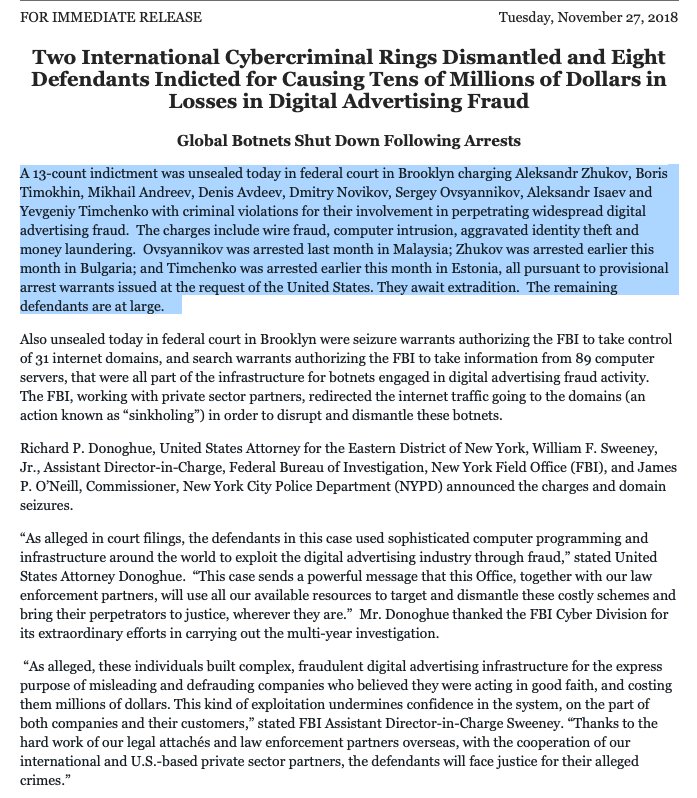 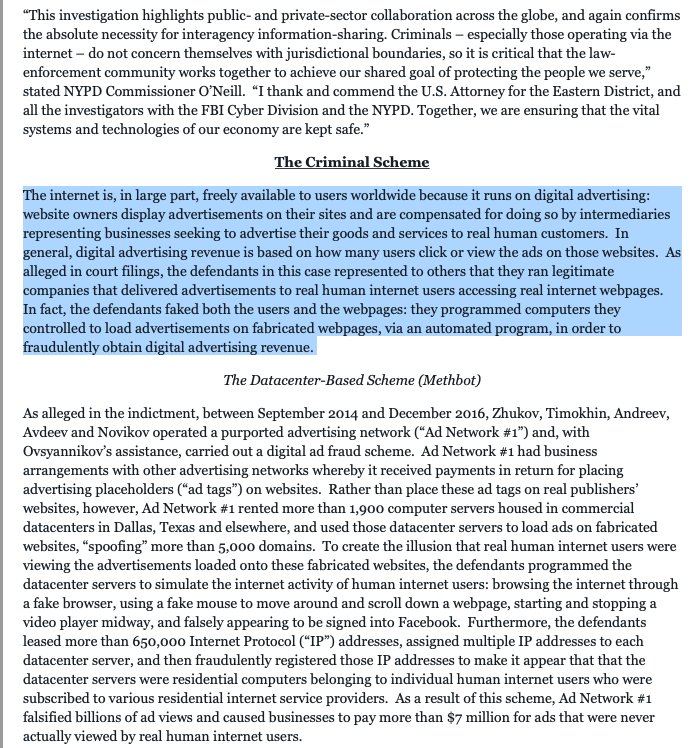 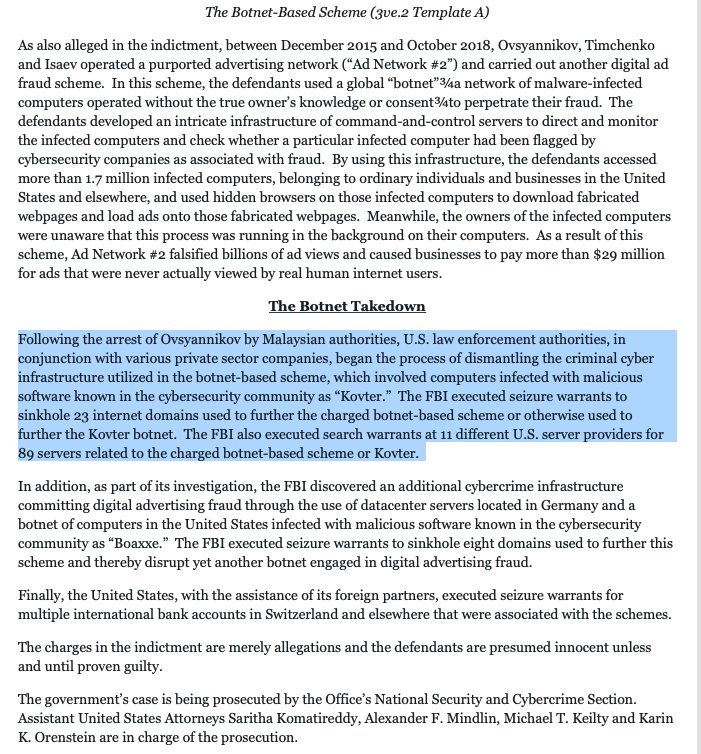 … earlier this month in Estonia, all pursuant to provisional arrest warrants issued at the request of the United States. They await extradition. The remaining defendants are at large.” 3/

WE HAVE LOTS OF FRIENDS WHO HELPED US WITH THIS CASE. 4/ 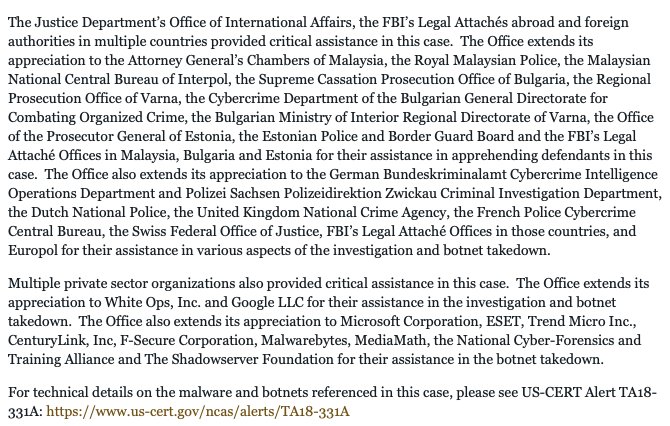 5/ Here’s the indictment, my lovelies: https://www.justice.gov/usao-edny/press-release/file/1114576/download …

Shall we read it together? Let’s! ruh roy they used computers in Texas. that’s bad. cuz..even if none of the humans doing the criming are in the US, their crimes now ARE. 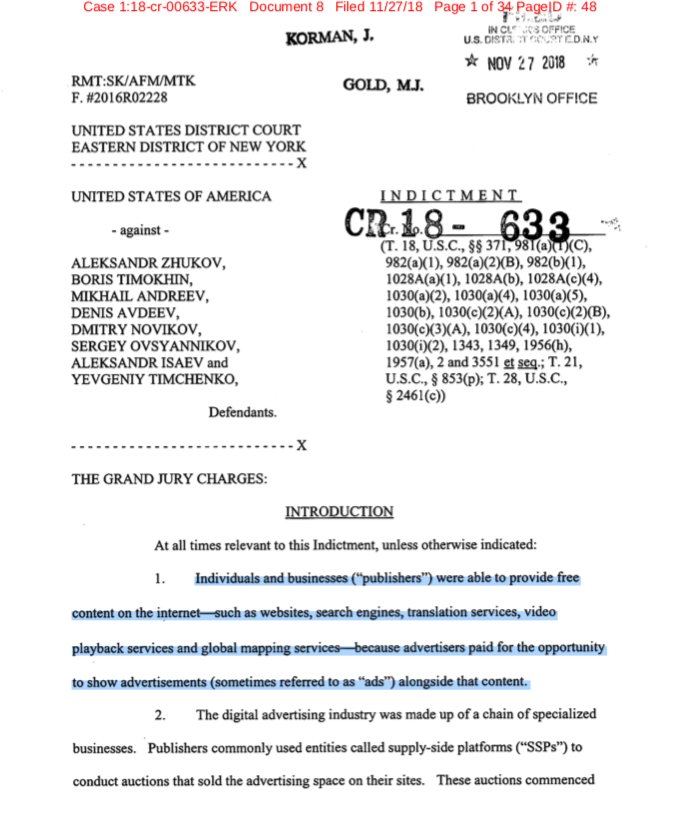 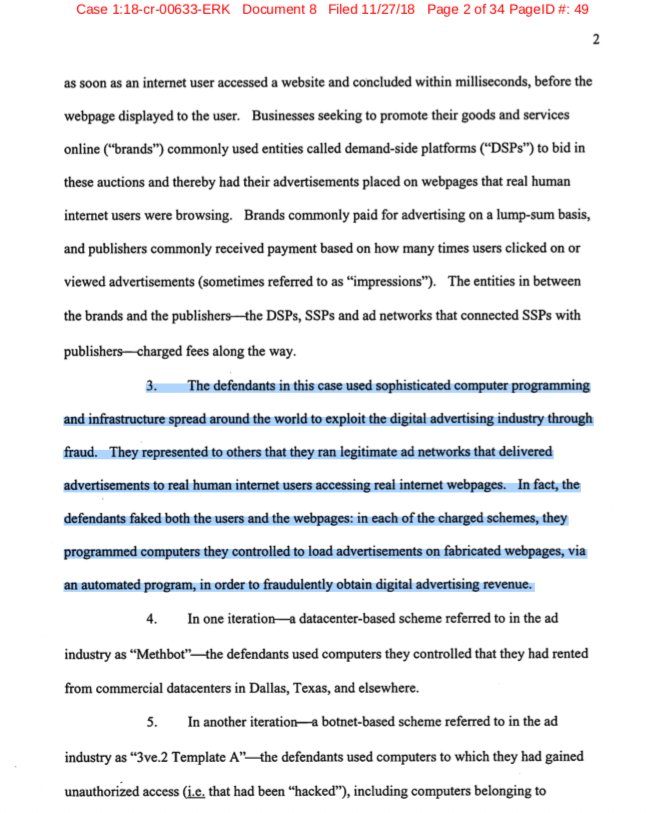 They hacked other people’s computers to use them, and some of those computers were in EDNY. That was dumb. because now they are being indicted by EDNY Now look at where they all lived/are from: Russian Federation, Ukraine, Kazakhstan, Bulgaria. Oooh a corporate entity in Scotland 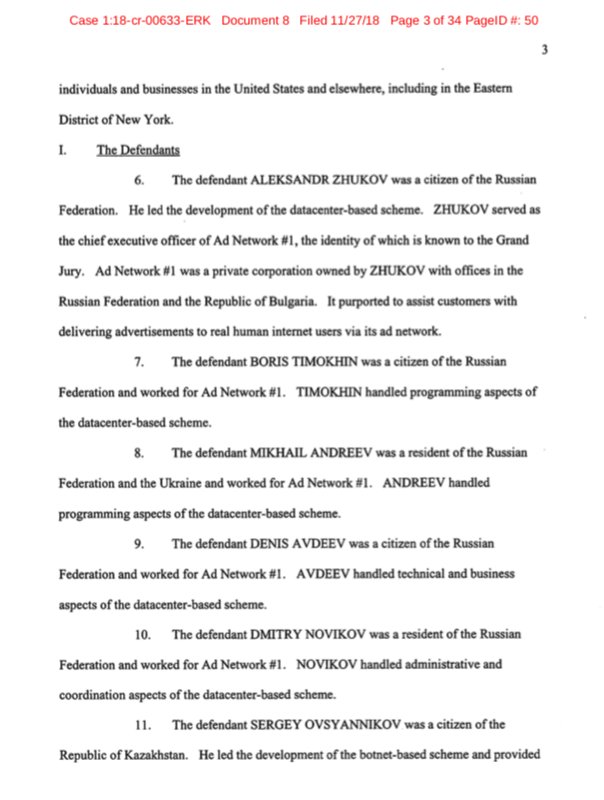 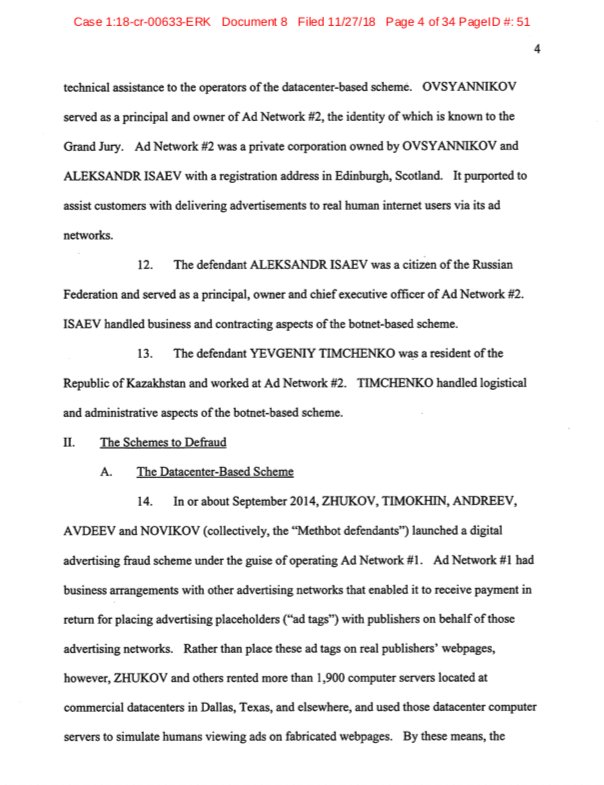 DoJ literally have the instructions the bosses gave to the employees to make the bots more “humanlike” to fool the computers into thinking the traffic was real. #pwnedByDoJ. 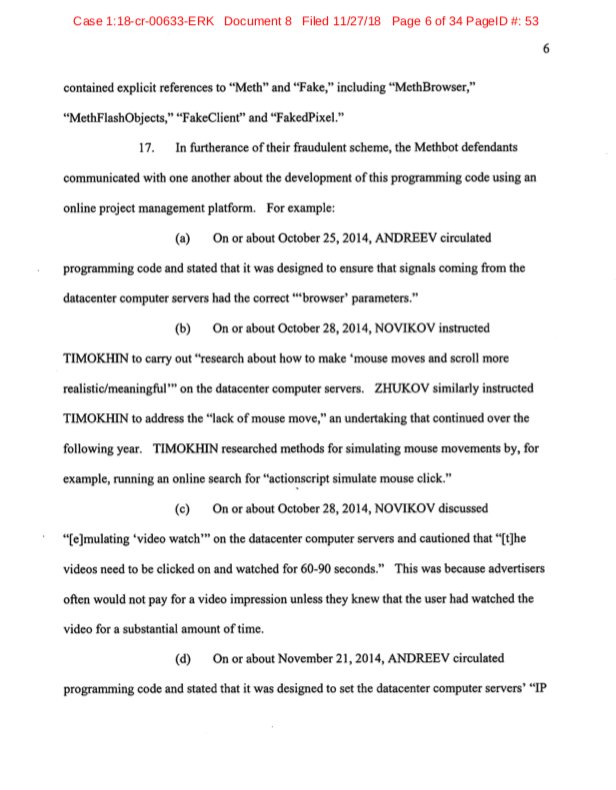 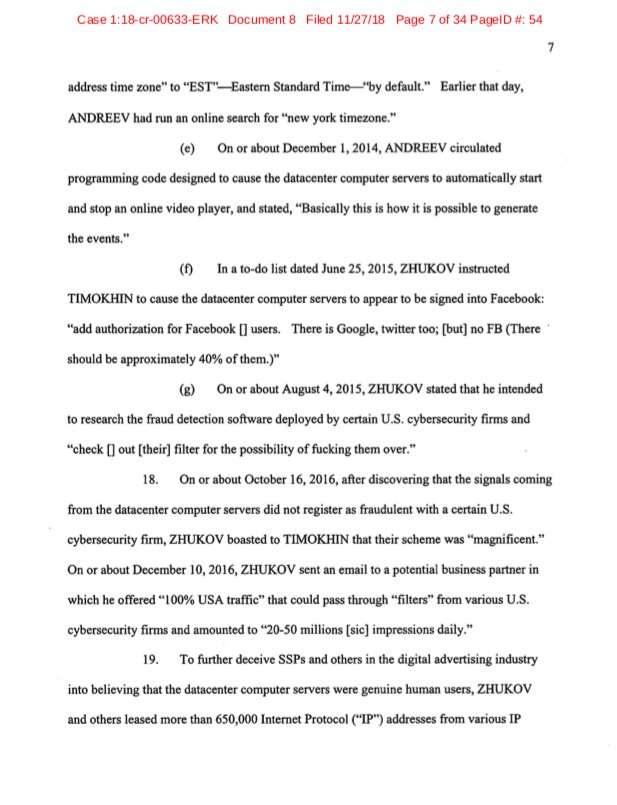 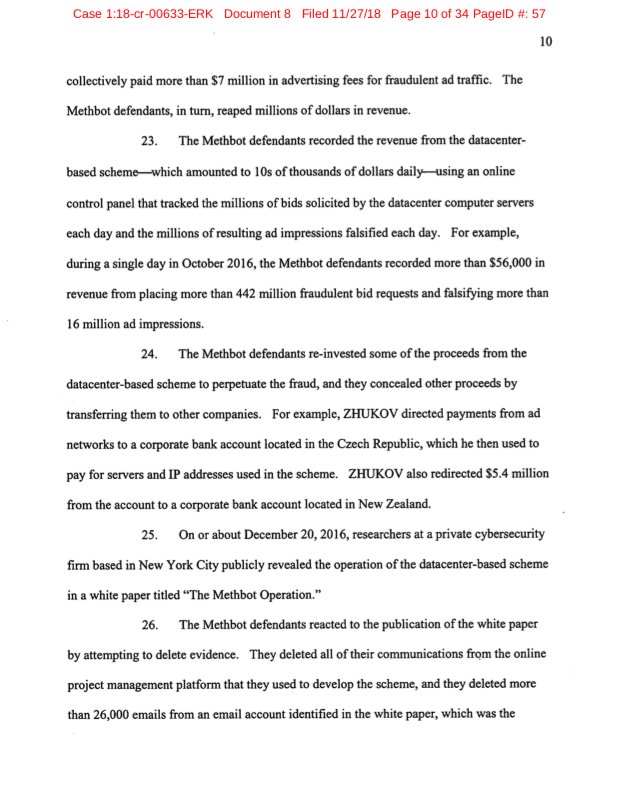 Note how the criminals responded to the publication of the paper: they tried to delete evidence of their crimes. #ConsciousnessOfGuilt #SpoliationOfEvidence? 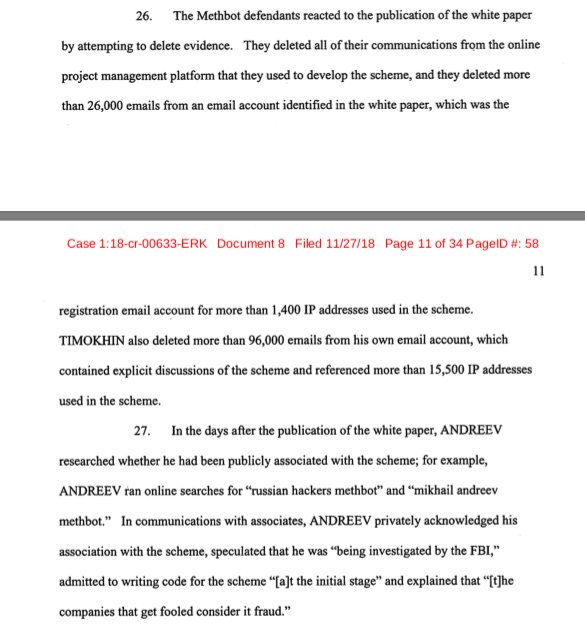 We now turn to look at the other scheme: #sillyrabbits thought they could get away with attacking >1M US computers? nice try, eejits. 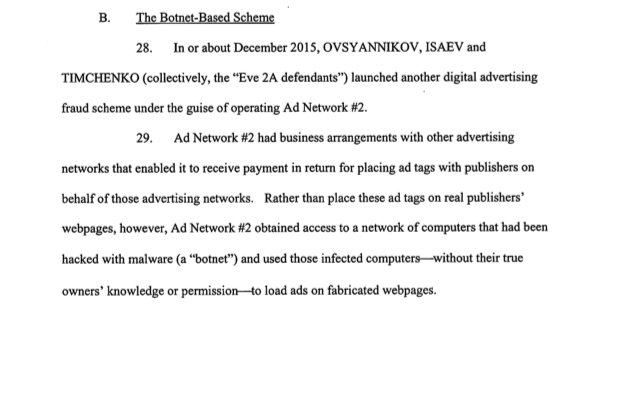 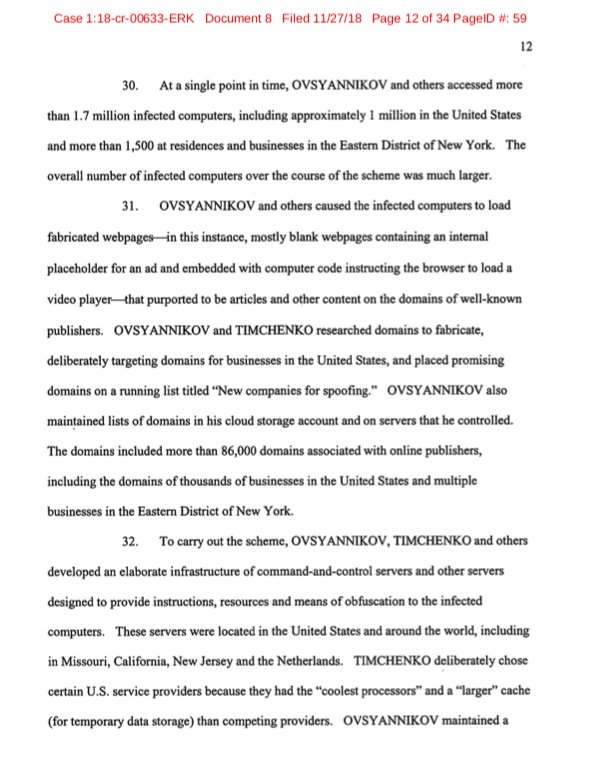 #Dummies. “it’s safe in the cloud” okay, sure Jan.

Read paragraph 41(a). yikes. be glad you’re not that idiot. 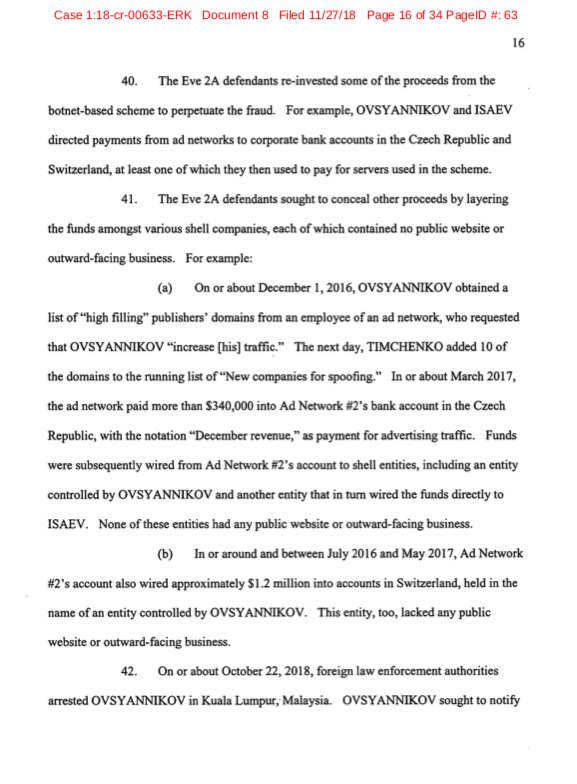 The sheer number of victims in this case is astounding. you should seriously read the whole indictment, but I particularly love Count Eight, because of the “Overt Acts” description 🙂 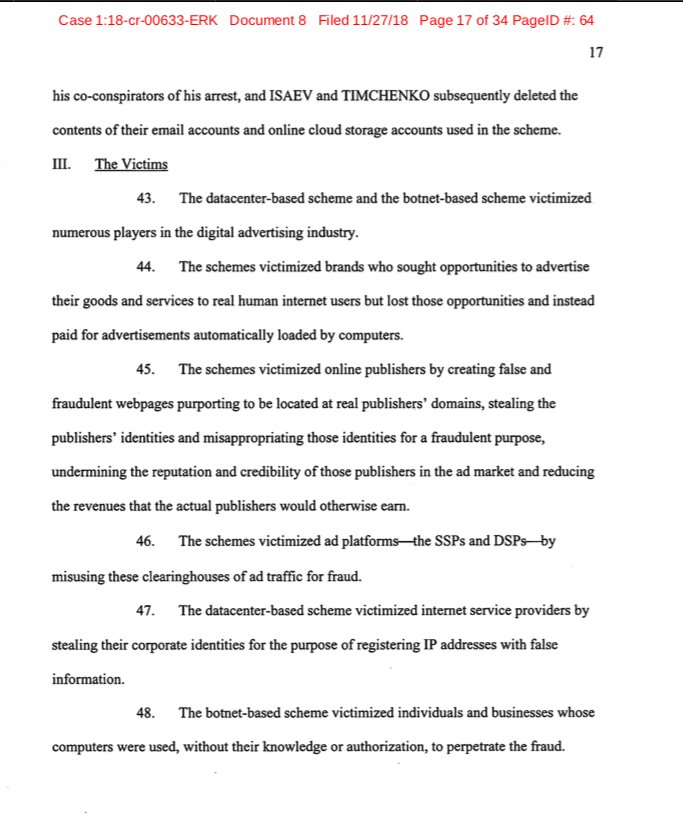 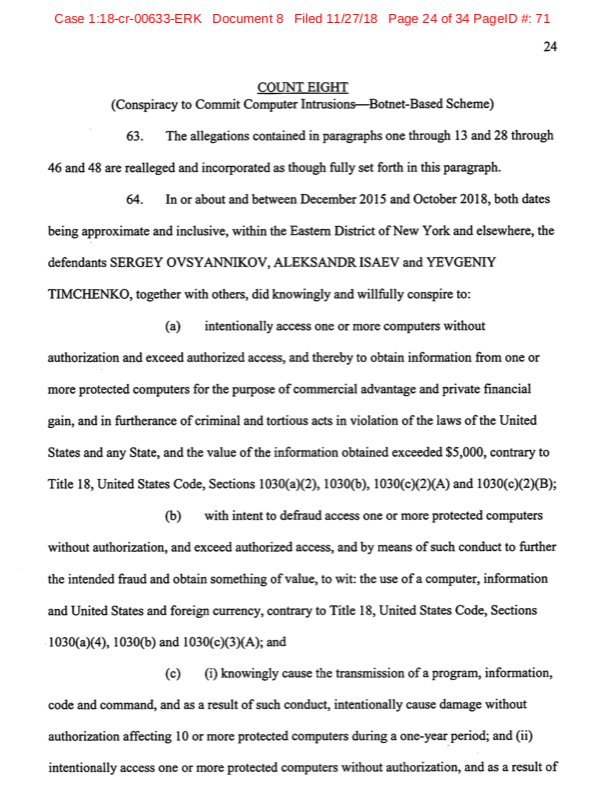 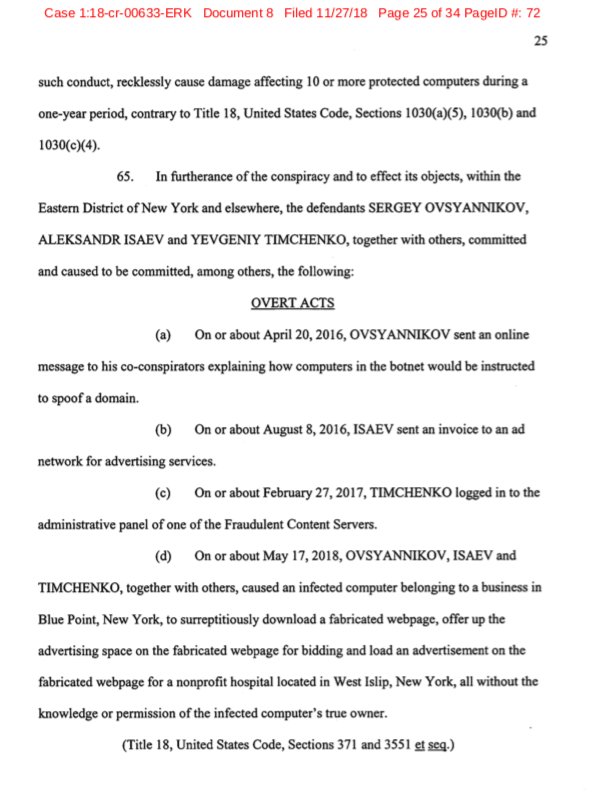 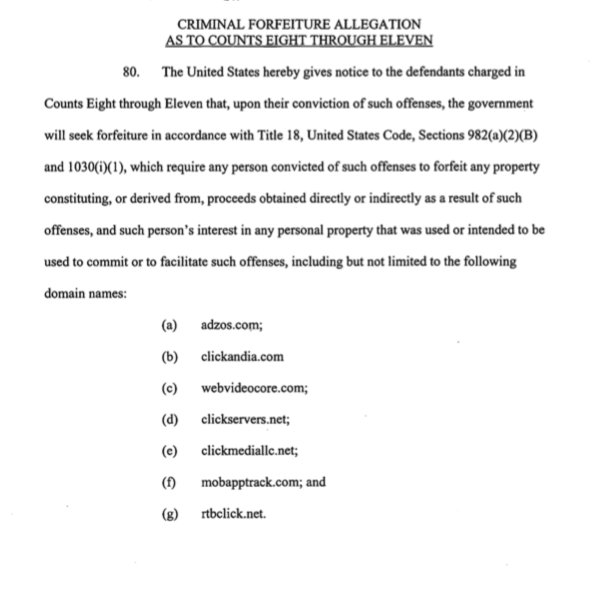 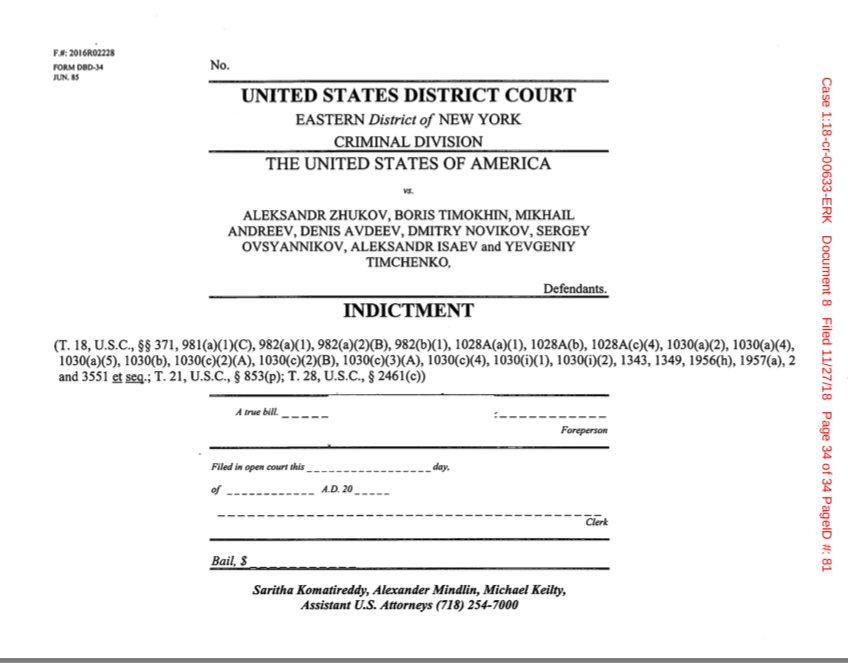 Not certain this is them but… A Mikhail Andreev follows a Boris Timokkin on GitHub. You’re welcome. 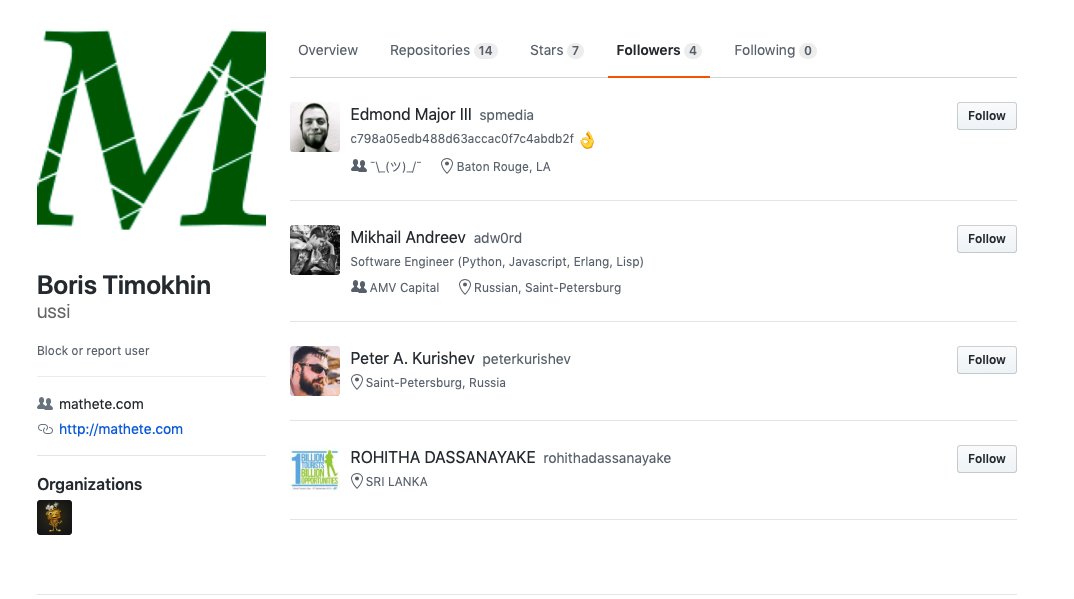 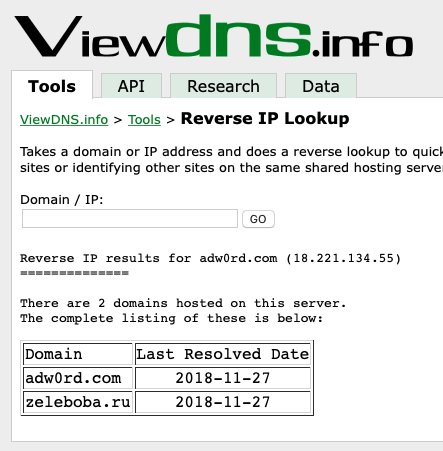 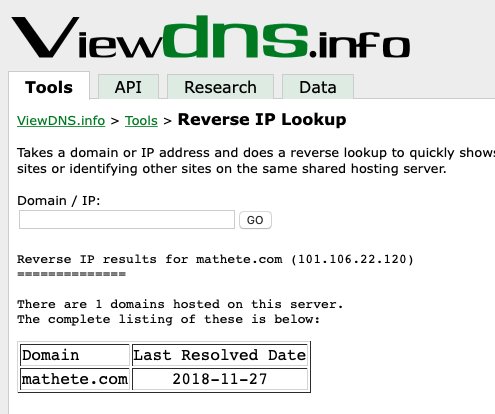 Why include this?  It’s important to not lose faith in the justice system.  Also, bots generating false webtraffic to generate revenue is just one of the tools used by the bad guys in this drama.  They generated millions in fake revenue by having their bots go to their pages and click on their advertisements.  Each time they got a click, the ad company would pay them.

This is one of the big problems with the internet.  An ad based system for revenue can be gamed, and those clicks are also used by companies to sell themselves on how much traffic they get and how popular they are.  The more traffic, the more advertisers will pay for space.

Why? Bots.  They allegedly performed fraud by having bots click on stories and generated ad revenue.  This increased traffic which increased revenue which fed into itself.  When they no longer had a need for the increased traffic after the election, the bots stopped.

1/ What did we learn today? We learned that mueller has evidence that Stone, who was communicating with Trump, asked Corsi to ask WikiLeaks what they had. We also know Corsi sent Malloch (@peterjukes and I were just talking about him) to find out what Wiki fotnfrom GRU.

2/ Then we learned that a week later, Corsi told Stone Wiki had dirt on HRC that they were releasing in October 2016. So we have a direct link between the Trump campaign and the Kremlin, and Mueller has proof. (He wouldn’t ask without it)

3/ Then we learned Manafort’s plea agreement blew up because he was feeding intel from the Mueller investigation to Trump. We were wondering why Manafort didn’t signal his plea agreement by ending his Joint Defense Agreement. This is why. Seems like obstruction.

4/ Now we wonder why Stone or Corsi haven’t been indicted. Is Whitaker blocking, or was Mueller delaying the Manafort sentencing filing to wait for Trump’s answers to come in to see if they match? I think both. And if we Stone indictments get blocked,

5/ We could get a full explanation in the Manafort sentencing document likely coming in December. Whitaker can’t block that. And we would eventually learn Whitaker blocked it. More obstruction…

6/ And finally, don’t forget! Was Manafort promised a pardon in exchange for the intel swap? It’s only Tuesday, folks. If you’re not listening, it’s a good time to start! #beans

That’s it for Tuesday.  Damn.   This was a bit busy.  I’m sure Wednesday will be a quiet day, right?

Oh, what’s that?  Trump was rage tweeting memes at 2AM about jailing all of his enemies, and a major report came out about how the current Labor Secretary Alex Acosta gave Trump’s pedophile buddy Jeffrey Epstein a sweet deal and screwed over dozens of his victims?  Don’t worry, I’m sure by 5PM we’ll get something even more outrageous.

Like Greg Olear said, this why we don’t get enough sleep and drink too much.