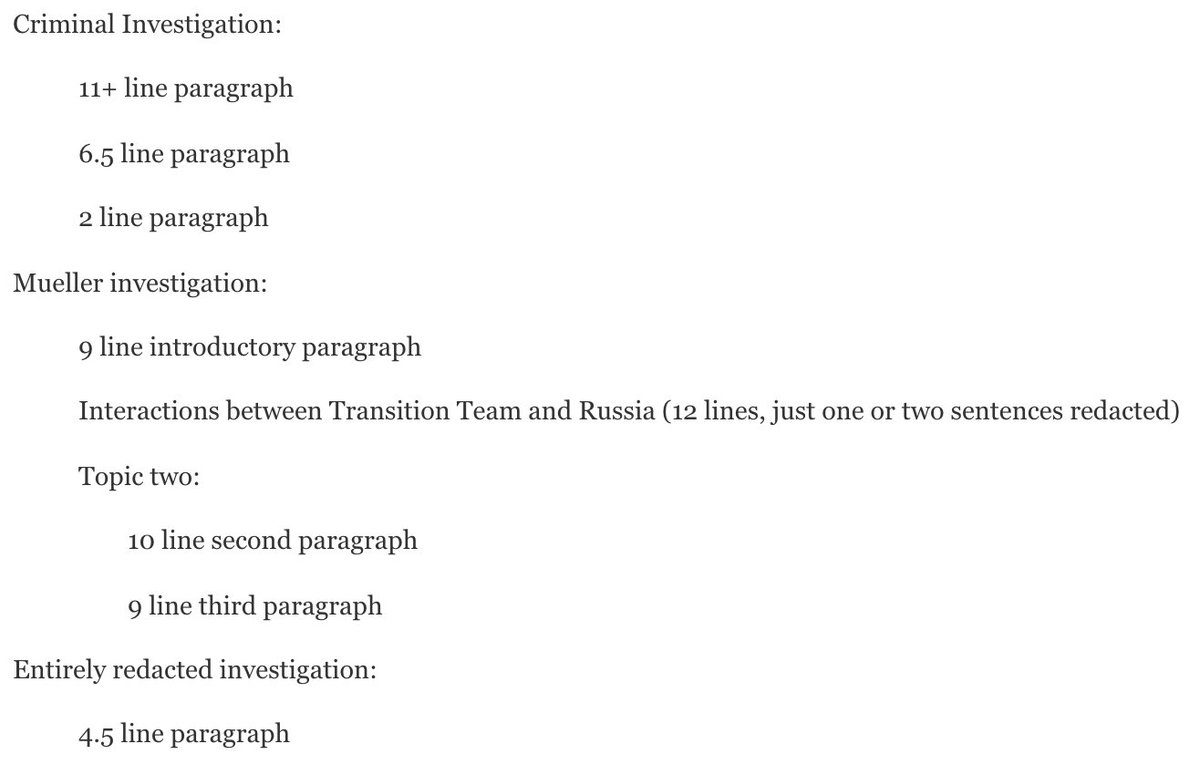 And this is what the intro structure works out to be.

Updated this to correlate with the introductory paragraph. 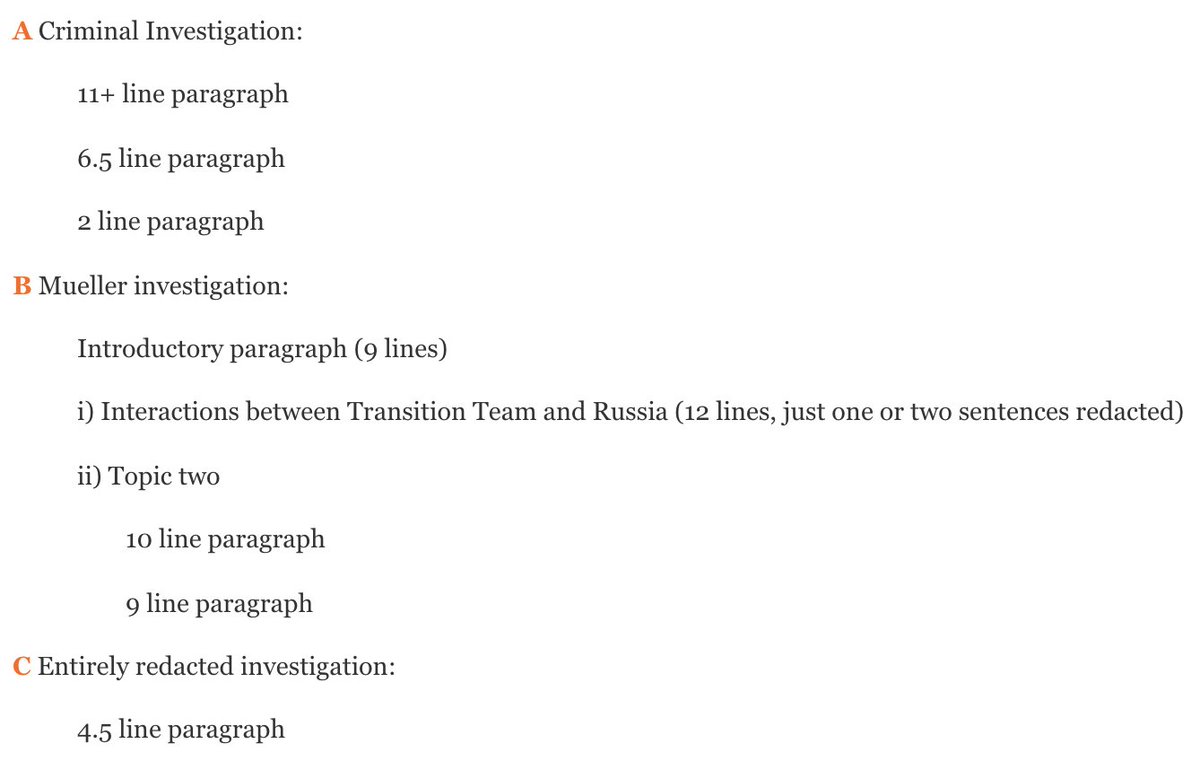 Yep.  The fecal matter has hit the air circulation device.  This is a little bit of what we’ve been waiting for. (Daily Check-In 12/03/2018).  It’s been a little over a year since Mike Flynn was arrested and officially cooperated with Special Counselor Robert Mueller. (Daily Check-In 12/01/2017).  Now, we finally see how much he’s cooperated, and what direction they’re heading in.

Here’s what we know for certain: Mueller says Flynn’s cooperation was timely, firsthand, thorough, honest, and helped get others to flip.  Flynn met with the SCO 19 times.  19.  There’s also multiple investigations that he’s cooperating with.  He gave Mueller documents, communications, and anything else he had.  Flynn was so helpful that Mueller recommend no jail time.

What don’t we know for certain: We don’t know what those other investigations include, or how many there are.  We don’t know who are the targets, what are their scopes, or how far along they are.

What will we speculate: Oh boy, we’re going to Speculation Land!

First, he sung like a canary.  He gave up EVERYTHING.  Mike Flynn was in some serious trouble. (Flipping Flynn).  Bribery, FARA, Espionage, Treason, Kidnapping, and a few other things like leaving the toilet seat up and not tipping 15% for good service.  He might still get charged with those other crimes under superseding indictments, but assuming he doesn’t, Mueller’s recommending he doesn’t serve any jail time for his crimes.

Why give such a lenient sentence?  Because he hand-delivered bigger fish.  He saw everything, knew everyone and everything, and took part in all of it.  The only way he doesn’t get prison time is he has enough evidence to build a solid case against the people above him.  And, in the Grand Bargain, there were only a few people above him.  Trump and Pence are two of the most likely suspects.

Second, there are probably 3 investigations going on that Flynn gave up information on, and two of them are so secret that they were redacted.  Well, mostly redacted.  One line  ends with “Criminal Investigation”, and I’ll post the tweet tomorrow from Scott Stedman where he speculates that, based on the size of the redact, that it’s an investigation into Trump himself.  The third investigation is completely hidden from view.  That’s the interesting one.

Finally, Mueller isn’t going anywhere anytime soon.  We can safely speculate that all of this information is safely in the hands of the courts.  All of it.  Flynn’s almost certainly testified before a grand jury.  The unredacted version is sitting in a DC courtroom today, along with all of the related evidence.  Everything is ready, waiting for a Senior Assistant Special Counselor to say the word and unseal EVERYTHING.

The FBI started investigating Team Trump in Summer 2016.  That’s 2 and a half years ago.  Mueller’s been on the case since May 2017.  They’ve had all the time in the world to plan this out.  Trump just lashes out like a toddler having a temper tantrum.  All of his moves are telegraphed long ahead of time, and easy to predict and deflect.

1/ Generally speaking, the Fifth Amendment does not apply to the production of documents. The exception is when the mere act of producing the documents would itself be incriminating.

President Donald Trump’s confidant Roger Stone is rebuffing a request from the top Democrat on the Senate Judiciary Committee for documents and an interview connected to 2016 Russian election meddling, invokin…

2/ For instance, if you’re under investigation for stealing classified information, and you’re subpoenaed for that information, the mere act of producing the information would incriminate you.

4/ That essentially means that the prosecution can still use the document, but they can’t say where they got it from. Here, I suspect House Democrats will discuss with Mueller whether giving “act of production” immunity would undercut him at all. /end

1/ Roger Stone’s attorney was once with the firm of Rothstein, Rosenfeldt, Adler. All three of those men went to jail for their role in a massive $1.8 billion Ponzi scheme. Roger worked in their offices and was paid over $400,000 for “services” to Scott Rothstein,

2/ This is one of about a bazillion South Florida politics stories where Roger is up to his ass with weirdos, skeeze, and scammers.

3/ Some of RS’s work for Rothstein was to help relect the #backstabber Charlie Crist. Rothstein once spent $52,000 on a cake for Crist. lol.

Roger picked the best day possible to do this.  Most other days, news that the former Presidential Advisor planned on pleading the Fifth Amendment would be the biggest story.  Not so today.

The Fifth Amendment protects a person from testifying against oneself and incriminating oneself in a crime.  However, like all things with Roger and his buddies, they screwed something up.  A person can only plead the fifth for testimony, not for producing documents.  Only in a situation where producing said document would be illegal in itself can it be protected.  Secret Twitter messages and texts won’t count.

At this point, we don’t have evidence that the Russians performed this hack.  However, we do know that they hacked the Republican Party in 2016, and this fits their Modus Operandi.

Chaos has erupted at a conservative think tank after it was revealed that one of its new donors is Len Blavatnik, the Ukrainian-born billionaire who owns the Warner Music record label.

Charles Davidson — the founder of the Hudson Institute’s Kleptocracy Initiative, a group dedicated to exposing threats by authoritarian regimes to US democracy — said he quit as its executive director upon learning that the Hudson Institute had accepted a $50,000 donation from Blavatnik.

“Russian kleptocracy has entered the donor pool of Hudson Institute,” Davidson said in an exclusive interview with The Post. “Blavatnik is precisely what the Kleptocracy Initiative is fighting against — the influence of Putin’s oligarchs on America’s political system and society — and the importation of corrupt Russian business practices and values.”

Blavatnik — long friendly with bigwig politicians like Bill Clinton and movie makers like Martin Scorsese — made his fortune in the controversial privatization auctions of 1990s post-Soviet Russia, scooping up valuable aluminum companies on the cheap.

Ok, this is a crazy ass story that needs more attention.  It’s been brewing for a few weeks, but it might have finally gained critical mass.  Here’s the election fraud that the Republicans scream about all of the time.  Except, they’re the ones performing it.

Here’s how the scheme worked:  A GOP Operative hired some people to collect mail-in ballots from people that haven’t been mailed in yet.  They’d get those people to sign them, but not seal them, whether or not they’ve been filled in.  It’s better if they’re not filled in or sealed because what they’ll then do is fill them out for their candidate, usually the Republican.

It sounds like there’s been an ongoing investigation since 2016, when similar shenanigans took place.  Plus, it might be that this was done for the Sheriff of Bladen County, not for the House seat.

The reason why this investigation started is the statistics didn’t make sense.  In every other county in North Carolina, there were more Democratic absentee ballots submitted than Republican, and they typically voted along party lines.  Except Bladen County.  Here, it was overwhelmingly Republican votes, regardless of party affiliation.  There were no mitigating factors that could explain the discrepancy.  Bladen didn’t have any special elections or amazing characters running for office.  Why the difference?

Turns out it looks like voter fraud.  And this year, the result was close enough that they had to look closely at the mail-in votes.

Fuck.  When Countercheckist smiles, people in the White House get nervous.

That’s it for Tuesday.  The week is just heating up, and it already feels like it should be over.  But, we still have a long way to go.