I’m not saying that I know for sure what is under the redacted phrase but “President Donald J. Trump” fits perfectly.

Remember I was talking about this yesterday? (Daily Check-In 12/04/2018)  This is by no means definitive proof that Trump is the target of one of the hidden investigations, but it doesn’t help disprove it.  Without going into a deep dive on fonts, this document appears to be written in Times New Roman, which is a proportional serif font.

So, what the hell does that mean?

The serif is that little flourish or squiggly thing hanging off of the edge of a letter.  Look at that capital “L”.  If you’re viewing this in Times New Roman, which is the font I’m typing this in, you should see that little upswing at the bottom of the ‘L’  That’s a serif.  It’s also on the ‘T’, ‘l’, ‘r’, and pretty much every letter and number.  If a font is Sans Serif, that means it doesn’t have a serif or flourish.

Proportional fonts are fonts in which each character has a different width, depending on the width of an a character.  For example, the ‘i’ takes less space than a ‘W’, since it is much more narrow.  Monospaced fonts, on the other hand, give each character the same width.  This is usually done by squeezing larger letters and extending smaller ones.

Now that that’s out of the way, why is any of that important?

The sentencing document was written in Times New Roman, 12 point font.  That last number is how big the typeface is.  Since TNR is a proportional font, that means that words or sentences of the same character length would have different physical lengths.  The words ‘Penguin’ and ‘Feature’ both have 7 letters, but are different lengths on the screen and printed copy.  It’s not much of a difference to the naked eye, but it’s there.  This difference expands as the word or sentence gets longer.  The phrase ‘Pittsburgh Penguin Center Sydney Crosby’ has as many letters as ‘I would like to ride a Pegasus to Ohio!’, but they are not the same length.

The longer a phrase or sentence gets, it becomes less likely that a two random phrases have the exact same length.  Unless all of the characters are the exact same, it’s pretty difficult to get two phrases longer than a couple words to match up perfectly.  That’s why what Scott Stedman found is so interesting.  The redacted block of text identifying the target of the criminal investigation matches perfectly with ‘President Donald J. Trump’.

Don’t get me wrong, this is all speculation at this point, and it could be anything else.  However, this is like a key.  It’s possible that two random keys fit the same lock, but the likelihood that both keys are completely independent of each other, yet located nearby and used in the same context is highly unusual.

Paul Erickson, a longtime Republican politico whose Russian girlfriend is in jail on charges she acted as a covert foreign agent, has been informed that he may face similar accusations. The Daily Beast reviewed a “target letter” that federal investigators sent Erickson’s lawyer, which said they are considering bringing charges against him under Section 951 of the U.S. code—the law barring people from secretly acting as agents of foreign governments.

The letter also said the government may bring a conspiracy charge against Erickson, who is the boyfriend of accused foreign agent Maria Butina. The letter, which was sent in September by investigators working out of the U.S. attorney’s office in Washington, does not accuse Erickson of any crimes or guarantee that he will face charges.

Paul Erickson, a GOP Operative and Maria Butina’s “boyfriend”, just received a target letter from a U.S. Attorney.  Erickson, who helped Maria gain access to the highest levels of the GOP Establishment, is likely to be charged with being an agent of a foreign government.  If that sounds like espionage, it’s pretty damn close.  This law, often called spy-lite, is about as close to being charged as a spy as one can get without facing the death penalty.

Lobbyists representing the Saudi government reserved blocks of rooms at President Trump’s Washington, D.C., hotel within a month of Trump’s election in 2016 — paying for an estimated 500 nights at the luxury hotel in just three months, according to organizers of the trips and documents obtained by The Washington Post.

At the time, these lobbyists were reserving large numbers of D.C.-area hotel rooms as part of an unorthodox campaign that offered U.S. military veterans a free trip to Washington — then sent them to Capitol Hill to lobby against a law the Saudis opposed, according to veterans and organizers.

At first, lobbyists for the Saudis put the veterans up in Northern Virginia. Then, in December 2016, they switched most of their business to the Trump International Hotel in downtown Washington. In all, the lobbyists spent more than $270,000 to house six groups of visiting veterans at the Trump hotel, which Trump still owns.

Those bookings have fueled a pair of federal lawsuits alleging Trump violated the Constitution by taking improper payments from foreign governments.

During this period, records show, the average nightly rate at the hotel was $768. The lobbyists who ran the trips say they chose Trump’s hotel strictly because it offered a discount from that rate and had rooms available, not to curry favor with Trump.

“Absolutely not. It had nothing to do with that. Not one bit,” said Michael Gibson, a Maryland-based political operative who helped organize the trips.

Wow.  Just, wow.  As if this couldn’t get any crazier, here come the Saudis paying Trump over a quarter of a million dollars by using a lobbyist of theirs to house veterans at Trump’s DC hotel for the inauguration.

Here’s where it gets interesting.  When Trump was asked before whether or not the Saudis had any business at his hotels, they said no.  Technically speaking, that wasn’t wrong, as it was the lobbyist who paid for the rooms.  That’s what we call a middleman.  The middleman is the one on the receipt.  They turned around, put a markup on it, and gave it to the Saudis who paid them.

What’s worse is that they used veterans for this scam.

Rudy Giuliani accidentally tweeted a domain. Someone bought that domain and wrote that Trump is a “traitor.” Giuliani is now blaming Twitter for this. The man in charge of the cyber. Just absolutely baffling.

New from me: I talked to Jason Velazquez, who bought http://G-20.in  and whom Giuliani thinks “invaded [his] text.” “This would normally be a place where’d I’d make a big political statement, but the nature of this is so hilarious maybe I won’t.”

Rudy Giuliani alleged Twitter concocted a conspiracy to “invade my text” after he accidentally tweeted a URL to a website. Rudy did get very unlucky, though: The guy who bought the domain he inadvertently tweeted was a web designer late for improv class.

Remember, Trump named him the head of Cybersecurity.

1. Wow. There is a subplot to the election fraud scheme unfolding in North Carolina that is absolutely insane. This is DEEP in the weeds, but worth it. Let’s go.

2. So Jeff Smith owns a “video sweepstakes” business in Bladen County, which is apparently a place you an go and win money for playing video games. The head of the Bladen County GOP, Landon Bordeaux, goes to Smith and says that he’s about to get raided by the current sheriff.

3. But Bordeaux says, there’s an out. If Jim McVicker wins the 2014 election for sheriff, Smith will be in the clear. Bordeaux asks Smith to give McCrae Dowless $4000 IN CASH to help McVicker win. So Smith does it. And it works. McVicker wins by 350 votes!

4. But Smith gets stabbed in the back. McVicker raids his video-sweepstakes operation BACKED UP BY HELICOPTERS. Smith is pissed.

5. But apparently Smith does not blame McCrae Dowless, who, after all, did what he what he was supposed to do (If you overlook breaking N Carolina law) Smith agrees to let McCrae Dowless use an empty office in a building Smith owns to run his absentee ballot operation for Harris

standby have to take a phone call

7. This is apparently when Smith and McCrae Dowless become “former friends.” So when the current controversy erupts, Smith is more than happy to dime out McCrae Dowless to the Washington Post. Shows them the desk where Dowless sat and recieved the absentee ballots from his crew

8. Smith basically describes a whole bunch of illegal conduct by McCrae Dowless in fairly devastating fashion Well, someone (I don’t know who, but maybe McCrae Dowless) wasn’t happy about that Today, an even more devastating story emerged on Smith

9. The story on Smith involves a meeting that occurred during the 2018 primary. Smith was supporting Billy Ward in the GOP Primary to oust McVicker. At this point, he’s not working WITH McCrae Dowless, he’s on his own now At some point he attended a meeting & left behind NOTES

10. So today, one day after Smith dimed out McCrae Dowless to the Washington Post, these notes, written by Smith, make their way into the hands of a North Carolina reporter And they show Smith cooking up a scheme to pay CASH for UNSEALED ABSENTEE BALLOTS 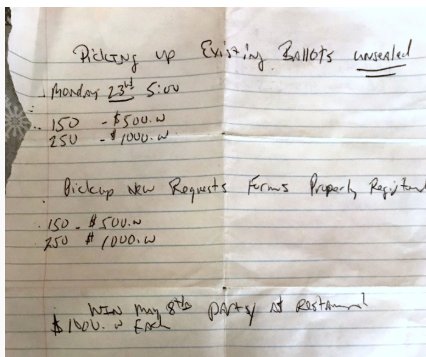 11. Smith was clearly desperate to oust McVicker. But he’s not as good at rigging absentee ballots as McCrae Dowless. McVicker defeated his opponent and is still sheriff. Where is goes from here — I have no idea.

A lot of the details in this story come from a great New Yorker article that came out a couple hours ago so, I also recommend reading that:

With due respect @tribelaw , @benjaminwittes , there were numerous citizen journalists from Dec 2016 onwards that broke story after story. People like @sethabramson & @malcolmnance plagiarized the work of @LouiseMensch & Dr John Schindler while concurrently attacking them both

The reasons it was important to call out Abramson & Nance were numerous. First, they both repeatedly stole work from various authors, attributing it as their own & monetized it. Second, in Nance’s case he misrepresented his roles & expertise in US IC @john_sipher @AshaRangappa_

That’s it for Wednesday.  After the bombshells from Tuesday, it felt almost slow.  Well, as slow as a massive voter fraud, emoluments lawsuit, and an senior member of the Republican Establishment about to charged with being a foreign agent can get.

Manafort’s sentencing document is due Friday.  I don’t think we’ll see it before then.

I’m going to update Cooperating Witnesses to include Michael Cohen.  I forgot to do that last week.