“Great,” Credico wrote back. “Hillary’s campaign will die this week.”

Reached Wednesday, Credico downplayed the text exchanges. “There’s absolutely nothing there that I had any knowledge of anything that Assange was going to do because I didn’t,” he told NBC News.

“The texts provided to NBC News demonstrate that my client, Roger Stone, has been consistent for the past two years in his assertion that Randy Credico was the person who was providing him what limited information Mr. Stone had regarding WikiLeaks,” Smith said.

Special counsel Robert Mueller has been investigating whether Stone had any advance knowledge of WikiLeaks’ plans to publish Podesta’s emails, according to people familiar with the investigation. Nearly a dozen Stone associates have been summoned by Mueller to appear before his Washington grand jury, the sources said.

The text messages obtained by NBC News appear to show that Stone and Credico exchanged messages about Assange having damaging information about Clinton at least as early as Aug. 27, 2016. The texts show that at 6:07 p.m. that day, Credico wrote to Stone, “Julian Assange has kryptonite on Hillary.”

We have now entered the “Eat their own” phase of the investigation. Credico will likely flip on Stone, Stone wants to bury Credico to keep that from happening, and Corsi’s sitting in the wings striking a deal with Mueller.

Remember that Politico think-piece from a couple of weeks ago, in which a former federal prosecutor wondered if President Donald Trump had already been subpoenaed by special counsel Robert Mueller and was secretly litigating that behind the scenes? One legal expert clearly told Law&Crime why that was a “bogus” idea. However, the identity of this person has remained elusive.

Just like that, though, the “mystery appellant” has returned to the stage — but they’re still hiding behind the curtain.

According to federal court records, this person challenging a subpoena filed a “sealed 6,487-word brief” with the U.S. Court of Appeals for the District of Columbia on Wednesday. Judge Beryl Howell is presiding over the case.

Remember this story from Daily Check-In 10/31/2018?  Looks like there’s a new and rather lengthy filing in this case.  The more I think about this, the more I think that this mystery guest isn’t Trump, but someone else.  Someone close to him during all of this, like Don McGahn.  If this were Trump, does anyone think for a second he would have bitched about this on Twitter yet?

1/ Mueller is investigating attempts by Roger Stone to intimidate Roger Credico, a radio personality Stone claims was his back channel to WikiLeaks. @WSJ reports Mueller has asked about emails, text messages and online posts involving Stone and Credico.

3/ He would also need to prove that Stone had the intent to influence, delay or prevent the testimony of any person in an official proceeding. To prove Stone’s intent, Mueller could use all of Stone’s words and actions. That would include his emails and text messages.

4/ It would also include his verbal conversations with David Lugo, who @WSJ quotes as saying that he testified before Mr. Mueller’s grand jury about a blog post Stone helped him draft that was harshly critical of Credico.

5/ It would not be enough to merely show that Stone tried to convince people to criticize Credico. The First Amendment broadly protects speech that is not intended to impede an investigation.

6/ This same activity by Stone could also be used as evidence of Stone’s intent or knowledge as to other potential crimes. His statements to others about Credico’s claims can be used against him regardless of whether they constituted witness intimidation.

This fits pretty well with the leak at the top of this section.  Stone is trying to attack Credico to either keep him from testifying against Stone or to discredit him when he does.

Let’s not forget that Roger Stone knew that Wikileaks was going to release hacked emails at least a week before it happened.  Roger was also in communication with Guccifer 2.0, which turned out to be Russian GRU.  At this point, witness intimidation is the least of his worries.

This status report has an update to it from August.  Now it says that Rick Gates is helping on several ongoing investigations.

The defense they’re using is that if Russia did hack the DNC, it was a military operation, not a civilian one.  And they’re using this in court.

Holy dogshit, this is a big development here.

If this is the official story they’re going to go with, then ANY & ALL of their co-conspirators are now opened up to potential treason and espionage charges.  Anyone that helped the Russians with this hack at any point are now linked to an official military attack against the United States.  And the United States now has Russia on the record saying it was.

For anyone who wasn’t aware, the penalty for Espionage or Treason against the United States is Death.  Waving the death penalty in someone’s face is an easy way to get them to flip.

I’m still waiting for more information to come out on this, but there’s something fishy going on.  Might have something to do with that putrid little piece of filth Jacob Wohl and his fraudulent company SureFire Intelligence ( Daily Check-In 10/30/2018 ) trying to claim credit about this.

There’s two things that I’m pretty sure about.  Either something happened and he’s being blustery as hell to dissuade the public from this, or it’s a setup and he’s going to unleash a firestorm on the person who attacked him.

Fox News announced on Wednesday that it supports CNN’s efforts to restore Jim Acosta’s White House credential after the network filed a lawsuit against the Trump administration.

“Fox News supports CNN in its legal effort to regain its White House reporter’s press credential. We intend to file an amicus brief with the U.S. District Court. Secret Service passes for working White House journalists should never be weaponized. While we don’t condone the growing antagonistic tone by both the president and the press at recent media avails, we do support a free press, access and open exchanges for the American people,” Fox News President Jay Wallace said in a statement.

cc: @thespybrief Sounds like something you’ve written about before, John 🙂

Active Measures @ActMeasuresDoc
Retired member of US intelligence community told us he heard in December 2015 from more than one foreign intelligence service that when @realDonaldTrump was in Moscow in 2013 he approached the Russians to intervene in 2016 election. His pitch: “We can help each other out.”

cc: @thespybrief In particular, this: “Of greatest interest, NSA and its partners noted a spike in Kremlin conversations about Trump and the presidency in mid-November 2013, which was when Donald Trump was in Moscow for the Miss Universe pageant.”

Trump Gets Caught in His Own Web of Lies

cc: @thespybrief Great excerpts from your piece above: 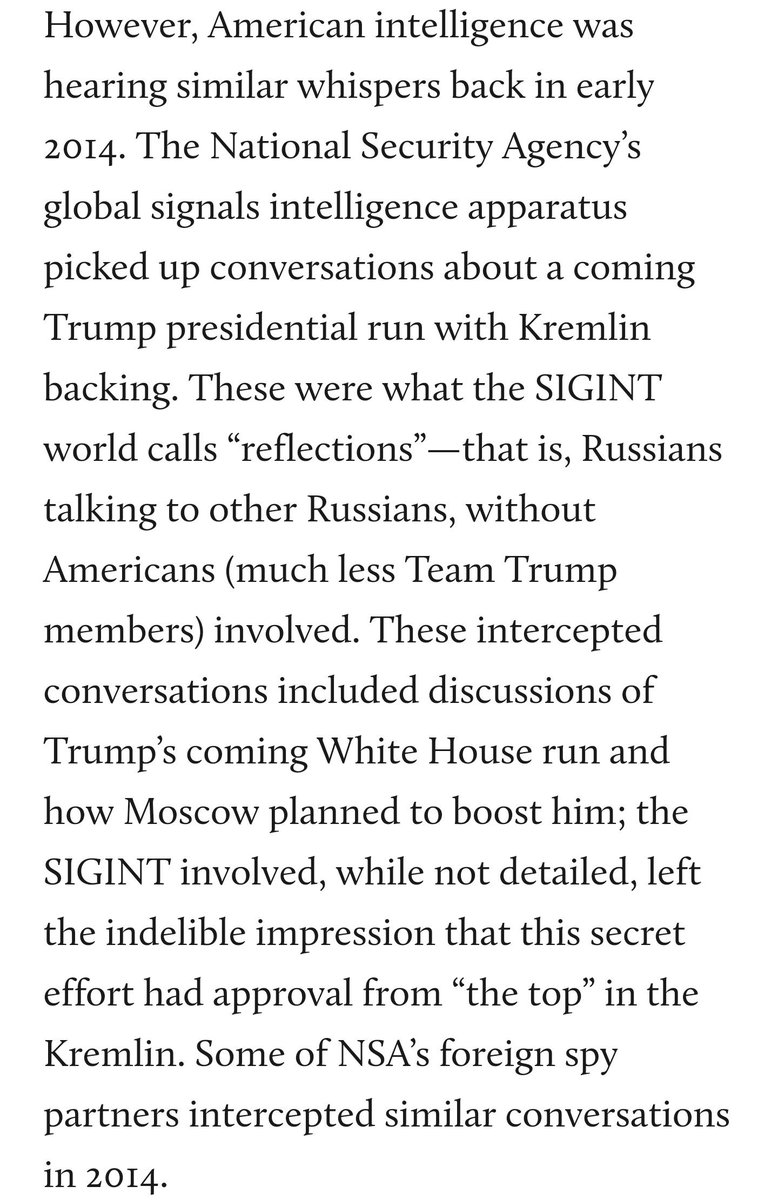 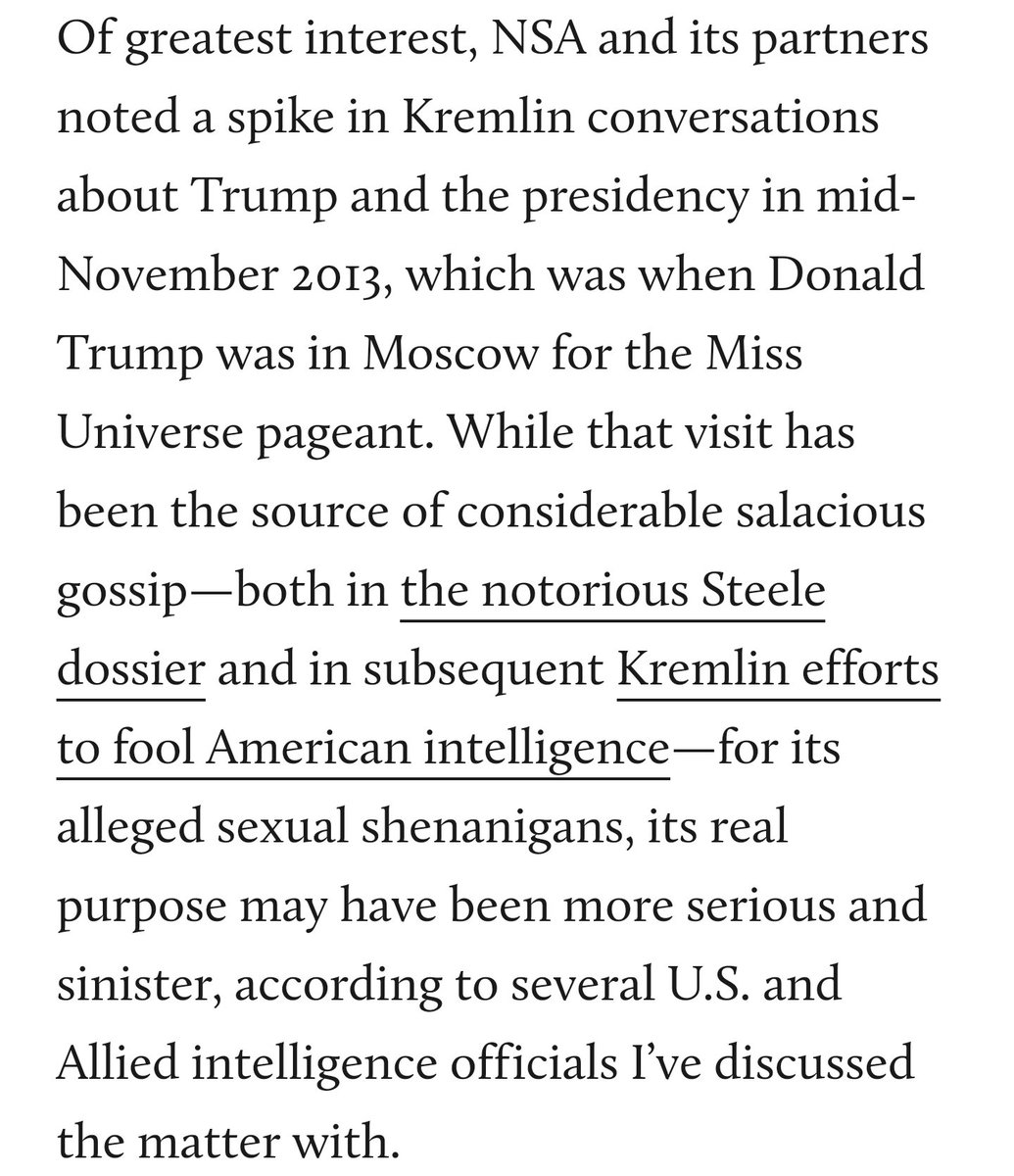 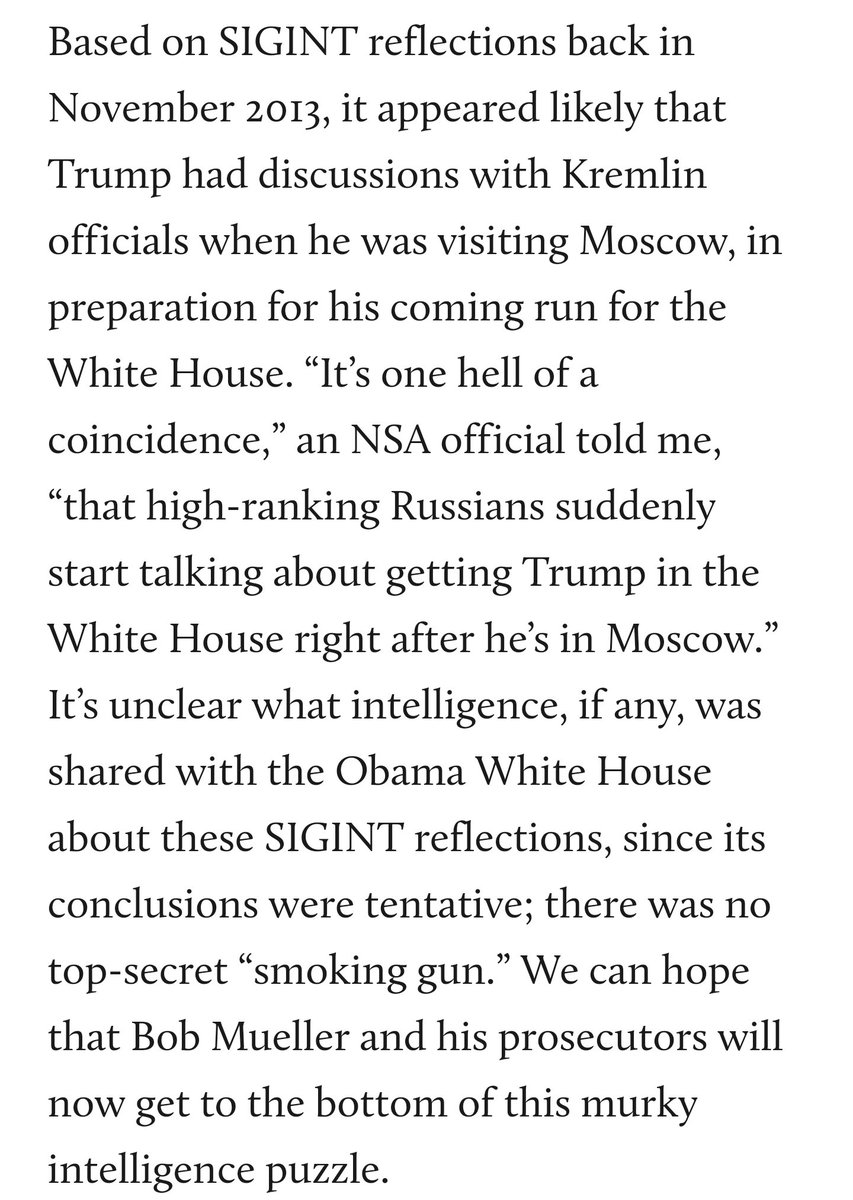 That’s it for Wednesday.  I hate to be that guy saying “Something’s coming”, but at the time I’m writing this, Mueller’s grand jury has been in deliberations for three straight days, and Orange Twitler went off the rails this morning.  Even more than usual.

Let’s see what’s coming in the next couple days.