From the Politco article:

The evidence lies in obscure docket entries at the clerk’s office for the D.C. Circuit. Thanks to Politico’s Josh Gerstein and Darren Samuelsohn, we know that on August 16 (the day after Giuliani said he was almost finished with his memorandum, remember), a sealed grand jury case was initiated in the D.C. federal district court before Chief Judge Beryl A. Howell. We know that on September 19, Howell issued a ruling and five days later one of the parties appealed to the D.C. Circuit. And, thanks to Politico’s reporting, we know that the special counsel’s office is involved (because the reporter overheard a conversation in the clerk’s office). We can further deduce that the special counsel prevailed in the district court and that the presumptive grand jury witness has frantically appealed that order and sought special treatment from the judges of the D.C. Circuit—often referred to as the “second-most important court in the land.”

But for those of us who have been appellate lawyers, the brief docket entries tell a story. Here’s what we can glean:

At every level, this matter has commanded the immediate and close attention of the judges involved—suggesting that no ordinary witness and no ordinary issue is involved. But is it the president? The docket sheets give one final—but compelling—clue. When the witness lost the first time in the circuit court (before the quick round trip to the district court), he petitioned, unusually, for rehearing en banc—meaning the witness thought the case was so important that it merited the very unusual action of convening all 10 of the D.C. Circuit judges to review the order. That is itself telling (this witness believes the case demands very special handling), but the order disposing of the petition is even more telling: Trump’s sole appointee to that court, Gregory Katsas, recused himself.

There’s a good deal of speculation going on here, and Emptywheel debunks some of this, but something getting lost in this is that the Special Counselor’s Office is chugging along like a train.  Their actions are quiet and deliberate.  We won’t hear what they’re doing until an indictment drops, but they’re scaring the shit out of a lot of people.

Court documents unsealed after nearly 45 years show that a federal grand jury in February 1974 was prepared to indict former GOP President Richard Nixon on four criminal counts for his role in the 1970s Watergate scandal that led to his resignation.

The charges, including bribery, conspiracy, obstruction of justice and obstruction of a criminal investigation, would have been for Nixon and his administration’s attempt to cover up the break-in and wiretapping of the Democratic National Committee headquarters at The Watergate Hotel in D.C.

Five men were arrested on June 17, 1972, for their involvement in the matter. The men attempted to photograph DNC documents and wiretap DNC officials’ phones, potentially sabotaging the Democrats’ chances at unseating Nixon in the upcoming 1972 presidential election.

The draft of the indictment from a Washington grand jury stated that “from on or about March 21, 1973…Richard M. Nixon unlawfully, willfully and knowingly did combine, conspire, confederate and agree together and with co-conspirators…to commit bribery…obstruct justice…and obstruct a criminal investigation.”

It further added that Nixon met with John Dean, Nixon’s White House counsel, and Harry Haldeman, Nixon’s chief of staff, on or about March 21, 1973, in the White House and “instructed” them to pay approximately $120,000 to E. Howard Hunt Jr., a former CIA agent and organizer of the Watergate break-in. Hunt Jr. had made the initial demand for $120,000 for his role in the break-in of the DNC headquarters, according to the draft indictment.

That same day, March 21, 1973, Hunt Jr. received approximately $75,000 in cash from Nixon messengers to influence his testimony to criminal investigators, according to the draft indictment. The following day, Nixon aides told the president that Hunt Jr.’s “money problem had been taken care of.”

Despite the ongoing investigation and a bombshell report from Washington Post journalists Bob Woodward and Carl Berstein that said the FBI believed Nixon aides were responsible for the Watergate break-in, Nixon won re-election in 1972 against Democratic Senator George McGovern of South Dakota.

Facing three articles of impeachment in the House, Nixon announced his resignation during a live TV and radio broadcast from the Oval Office on the evening of August 8, 1974.

Interesting.  A grand jury had all but indicted Nixon six months before he resigned.  Even more interesting that this is being unsealed now.

In other words, it’s a lie he’s making up.

Going to THREAD on this. Next item is a screen grab from the transcript. There is a way out of the dysfunctional cycle between Trump and the press, that not only restores the core mission of the 4th Estate, but saves our democracy in the process. Let’s lay it out… /1 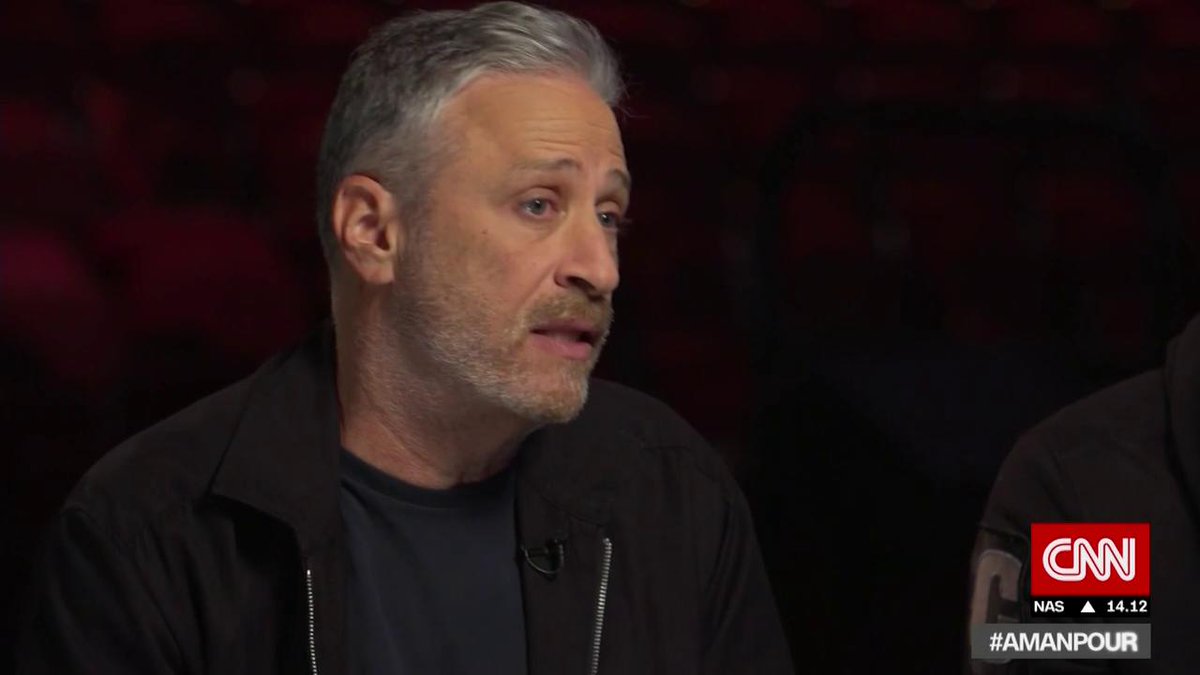 1:50
Christiane AmanpourVerified account @camanpour
President Trump has been able to appeal to journalists’ “own narcissism” by attacking them, says Jon Stewart. “They take it personally, and now he’s changed the conversation to, not that his policies are silly or not…

2/ Here’s the transcript. Read @camanpour‘s last line. Everyone can understand it. And democracy desperately needs journalists to rise above it. Here’s how: STEP 1. Read up on Russian propaganda tactics & techniques. Understand that you are dealing w/a President… 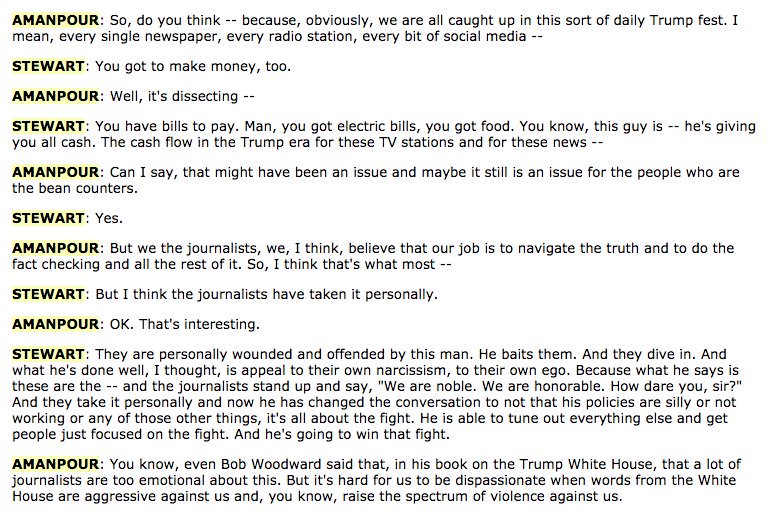 3/…who is well-versed & possibly trained in them. STEP 2. Realize that he is intentionally TROLLING & TRIGGERING you. You are taking bait. Not just to change a larger narrative, but bait that is specifically designed to DISMANTLE YOU. You are the target. (cont)

4/ Once you realize that, it’s easier to see it and adjust. STEP 3. Take note when you feel the physical effects of a trigger. You can FEEL the emotions triggered rise in the moment you’re being psychologically triggered. Take a deep breath. Dismiss all thoughts about self…

5/ Then… STEP 4. Use that trigger as a blinking red light for what he’s trying to distract you away from. It is only one thing: Corruption. FOLLOW THE MONEY. When he is actively triggering you, it means you are over the target. You are right on top of a story…

7/… He is NOT trying to use you to appeal to his base. STOP telling yourselves that. He has an entire far right media machine for that. He is trying to get you OFF YOUR JOB. He is psychologically terrorizing YOU. Specifically. So… What he’s actually doing is telling you…

8/… (by terrorizing you), that you are ON THE TARGET. See it that way. And when he is triggering you to get you away from his corruption… STEP 5. Do not drop your line of inquiry to enter some fight over his lies. His lies are propaganda. Meant to distract. (cont)

9/ Do not use his semantics, like “caravan” or “nationalist”. Those are pieces of propaganda, deployed at perilous moments TO HIM, in order to distract & hijack a narrative (see Step 1 above. this is why I’m asking you study up on it). THERE IS A REASON HE IS DOING THIS. So…

10/ STEP 6. Look at the most dangerous story to him personally at the moment when a new, or old, propaganda semantic is deployed – and PRESS HARDER on that story. Dollars to doughnuts there is corrupt money-dealing underneath it. I’ll end this with a simple illustration…

11/ When was the last time you asked him a question about MbS? – end –

That’s it for Wednesday.  I don’t have much here because of Halloween and trick-or-treating.  As a parent, it’s one of the best parts of the job.  The level of excitement that a kid has when going door to door, getting candy from neighbors, is amazing.  It’s the one day of the year where we tell them it’s okay to accept weird gifts from strangers.

Dad’s job during trick-or-treating is to play pack mule and plan the route.  It’s important to find the most efficient route, so that they’re not doubling back on themselves, or walking down streets they’ve already hit.

Things should be back to normal on Thursday.  And by normal, I mean a complete and total clusterfuck.