The embattled Deputy FBI Director is taking terminal leave, stepping down, or was forced out, depending on who you ask.

Multiple sources were each saying something slightly different, but it breaks down like this…

Andrew McCabe was scheduled to retire in March at the age of 49 with a full pension.  The initial plan was for him to stay on until March in this position, but suddenly this morning, he announced that today was his last day, and that he was using “Terminal Time” until his retirement date.

Terminal Time:  IIRC, Government employees accrue sick time and it carries over from year to year.  If you don’t use it this year, it adds on to next year’s, and so on.  At the end of 20 years, one could have a few months saved up.  That sounds like a little bit what happened.

Everyone is freaking out and losing their minds, acting like this is the beginning of the State of the Union Massacre.  A lot of people are jumping to the conclusion that Rosenstein is next, followed by Mueller.  Firing the investigator doesn’t make the investigation or the facts discovered disappear.

He will be replaced by Associate FBI Director David Bowdich.  More on him and this whole situation later on in the Rumor Mill section.

In a complete party line vote, the Republican members of the House Intelligence Committee voted to release Devin’s memo, not release the Democrats response memo, and refuse to be briefed by the FBI Director before doing so.

This whole nonsense sounds like a half-assed PR stunt gone wrong.  The Dipshit Who Cried Wolf has once again put himself in a position where he’s battling the Intelligence Community and Law Enforcement of this country.  Now, he’s trying to expose classified information that is vital to protection of the country so he can try to justify his actions in helping Trump.

These are not the actions of a man or a party that is innocent.  This is not the Republican Party I grew up with.  Hell, even the Party of Reagan at least had some scruples and respect for the law.

The Party of Law and Order is openly battling the FBI, the DoJ, and the Intelligence Community.

DEPARTMENT OF JUSTICE BELIEVES THAT CARTER PAGE IS A RUSSIAN AGENT

When your case for political bias is extending a search warrant against a suspected spy, you suck at conspiracy theories.

Shortly after the inauguration, Deputy Attorney General Rod Rosenstein authorized extending an already existing FISA warrant to keep an eye Carter Page.  This is pretty much rubber-stamping a previous order because they felt that the Sheldon Cooper of Treason was still up to some shit.

Rod Rosenstein was corrupted by the Steele Dossier, even though there’s no evidence he’d ever seen it, had ever heard of it, or even knew who Christopher Steele was.  Further, this completely ignores the fact that THE MOTHER FUCKING DUTCH TIPPED US OFF TO RUSSIAN INTERFERENCE MONTHS BEFORE CHRIS STEELE.  If that’s not enough, this point relies on people forgetting the previous talking points that Carter Page was a nobody on the campaign and that the Steele Dossier was a fabricated mess based on rumors and innuendo.

While all this shit is going on, the Trump Administration refuses to implement the sanctions that they were ordered to do by Congress last year.

If it weren’t obvious by this point, let me spell it out…

Donald Trump is a Russian Asset.  Whether knowingly and/or willingly will need to be worked out through investigation.

The Swiss have accused Natalia Veselnitskaya of being a Russian Spy, in a corruption case against a member of the Swiss FCP.

This is also a great article as it goes into further detail about Sergei Magnitsky and the tax fraud he uncovered that ultimately cost him his life.

Remember, these are same people that met with the President’s Campaign Team in his own building.

The grown-ups in Congress are actually investigating the Russian Interference, and late last year they received a document dump.  What they found scared the crap out of them. So much so that they feel that their investigation will continue for most of the year, if not longer.

This part of the article seems eerily prescient given today’s news.

Warner also warns about a “coordinated” attack by the president and “Trump zealots” in the House of Representatives to undermine the legitimacy of the investigations against him, an effort Warner says includes the president’s threats to fire special counsel Robert Mueller and other officials as well as a secret Republican memo alleging “shocking” FBI surveillance abuse against Trump that Rep. Devin Nunes (R-Calif.) is now threatening to release. Warner calls out Nunes, the chairman of the House Intelligence Committee, in arguably more explicit terms than any Democrat has yet, saying he has read the underlying classified material used in the memo and that Nunes misrepresented it as part of a McCarthyite “secret Star Chamber” effort to discredit the FBI probe of the president.

The Trump White House, his Legal Team, Friends, Enemies, Co-conspirators, anyone who’s ever met him expects Trump to commit perjury if he interviews Mueller.

I wouldn’t be surprised if Trump is trying to fire Mueller because he believes he’ll get railroaded in his interview by “gotcha” questions, and that he honestly thinks that if he gets rid of him, his problems will disappear.

There is no universe in the connected multiverse springing from this one where Trump gets away with this shit.  Sealed indictments exist in multiple jurisdictions against Donald Trump (per the Rumor Mill), and they’ll likely get unsealed upon Mueller’s firing. That assumes he survives the leaks of all leaks as WaPo and NYT run the stories that Mueller asked them to hold back in June 2017 that included the transcripts of the Mayflower Tapes where they have Trump on video asking the Russians for help in the election.

Mueller interviewing Trump is a courtesy at this point, where it will give him a chance to protect himself by throwing his staff and family under the bus.

Which is another reason they don’t want him to talk to Mueller.  About 10 minutes in, he’ll say it’s Ivanka’s fault, like he did in the Jose Andres case. And he was the plaintiff that time!

This marks the 33rd Republican in Congress to not seek reelection in 2018.

Trump being less popular than some forms of cancer, combined the with #MeToo movement is making this shape up to be an interesting election year.

538:  MORE RESIGNATIONS IN THIS CONGRESS THAN IN RECENT HISTORY

Combined with the number of Republicans refusing to run for reelection, we’re seeing something historic here.

These are all individual pieces of data, but there’s a lot shaping up for 2018 to be the beginning of the end of the Republican Party.  I know, that sounds like hyperbole, but the version we see today is dying, and will either continue to embrace a smaller and more extreme base year after year, or will have to readjust.

When crazy shit happens, I have a bad habit of getting caught up in the hysteria of the moment.  Everyone starts whipping around like it’s the end of the world, like the sky’s falling, and dogs and cats are getting along.

Eventually, I catch my breath and look for a few people in the Twitter crowd.  I look for the core of the Rumor Mill.  Louise Mensch, Claude Taylor, John Schindler, Eric Garland, Countercheckist, Tea Pain, and the Alt accounts.  What are they doing, and what are they saying.  Are they keeping their cool, or losing their heads?

When James Comey was fired, I did the same thing, partly to see what they were saying, but mostly to console myself that Democracy wasn’t dying in front of my eyes.  What they said and did was interesting.  They talked about how Comey knew this was going to happen, and how he laid out the groundwork for someone at the DOJ to take over for him.  About a week later, Robert Mueller was named the Special Counselor.

When the craziness of all the bad news came out in late October, they kept up the talk about how indictments were incoming by the end of the month.  Right before Halloween, Manafort and Gates were arrested.

Today, once again things feel dark and gloomy, like something terrible is on the horizon.  So, I check out the Rumor Mill and see what they’re saying and doing.

They are … rather calm.  Tea Pain is cracking jokes as usual, Eric is retweeting a reminder that Articles of Impeachment are already on file against Donald Trump, the Alts are hunkering down for a fight, Countercheckist is retweeting quite a bit about RICO and This FBI Raid from last May.  Claude is staying relatively chill, sending out proofs for new campaign billboards, and Louise…

Louise is borderline giddy at McCabe’s leaving.  Not because he wasn’t doing a good job, but with who was brought in to replace him, and the timing.

David Bowdich was a field operative, SWAT team member and sniper for the FBI before he joined the management team.  He’s career FBI, and doesn’t take shit from anyone.  He was promoted to Associated Director by Bob Mueller and named the head of the Los Angeles Field Office, and was the head of the Counterterrorism Task Force.  He was the face of the department following the San Bernardino terror attack.

I’m still skeptical of Chris Wray, and always will be until he puts a pair of cuffs around Trump’s tiny hands.  But his hires are very interesting.  On paper, they look like they could be yes-men, but in reality they are anything but.

As far as McCabe having access to the Trump information, here’s what Louise had to say on that: 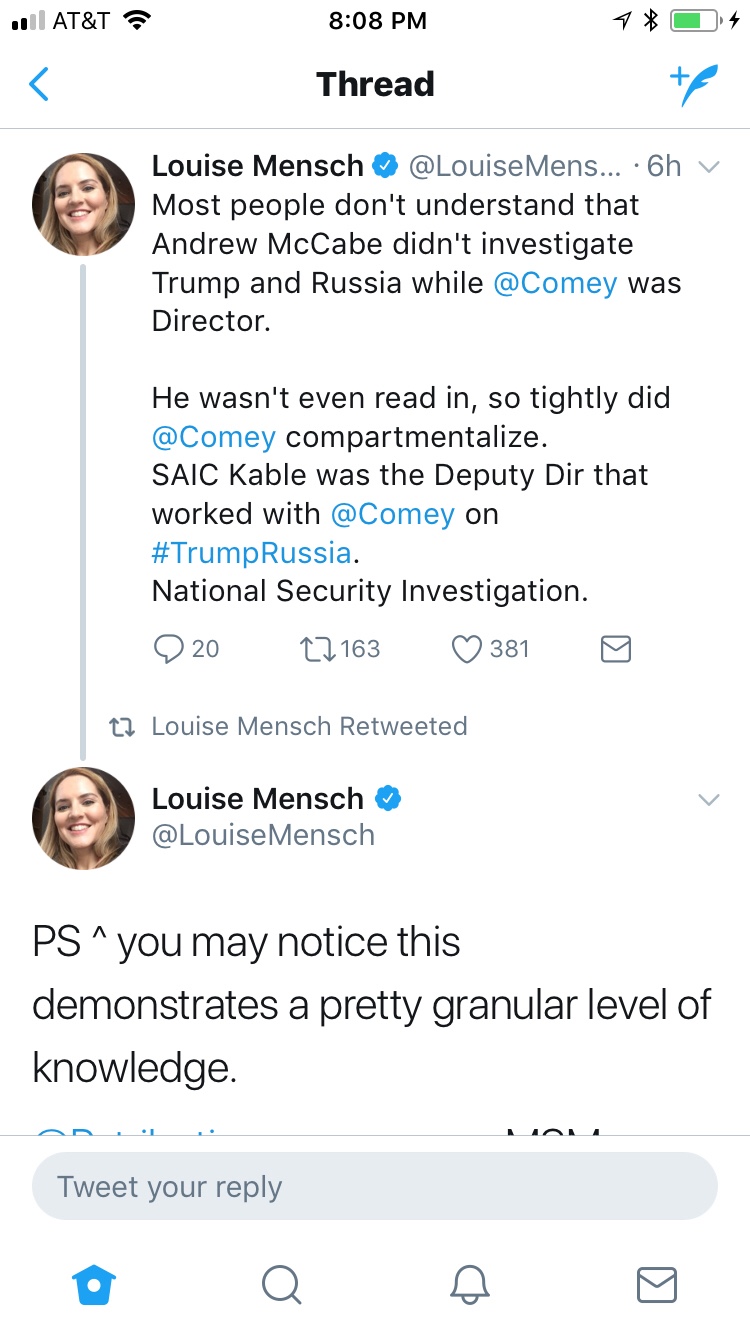 If Louise is right on this, then Trump assumed that McCabe knew everything that Comey knew, while the real Deputy working the case slipped under the radar.  McCabe only knew about Trump and Obstruction of Justice, not Russia.  At least, not until he became Acting Director.

McCabe was the meat shield to take the hits, while Kable was doing a sneak attack.  McCabe drew the ire of the Orange Troll while Kable snuck around, picked his pockets of any valuable info, and stabbed him in the back.

That’s it for today.  Yes, it’s been a crazy day.  I think it’s going to get crazier this week.  The President and his party have refused to enact sanctions against a foreign power that attacked this country, have begun open warfare against the law enforcement community, and are trying to actively make a case to fire anyone investigating this issue.

This is a list of ready-to-go protests around the United States, within 24 hours of shit hitting the fan.  Check your area, sign up if you feel comfortable with that, or hold on to the link if you don’t.  Be ready.  This may come down to a general strike, the likes of which this country hasn’t seen in a century.

We’ll get through this mess, but it’ll get uglier before it gets brighter.