Fuckery at the Treasury

This is bad.  Real bad.  There are four stories rolled into this bombshell from BuzzFeed News.

Remember the FinCEN official that leaked Paul Manafort’s SAR to a BuzzFeed reporter after it disappeared from the official system?  (Daily Check-In 10/17/2018)  The following section speaks to Point 4.

The report indicates that there is some turmoil behind closed doors at FinCEN:

At least 10 FinCEN employees have filed formal whistleblower complaints about the department. The whistleblowers say they tried multiple times to raise concerns about issues they believed threatened national security, but that they faced retaliation instead of being heeded. Some of FinCEN’s top officials quit in anger. One senior adviser has been arrested and accused of releasing financial records to a journalist.

The arrested and accused adviser referred to in that last line was Edwards. Remarkably, Edwards is said to have raised her concerns about Russian efforts to access confidential bank records of Hillary Clinton supporters in the Summer of 2016, months before the election.

Edwards reportedly spoke with “six different congressional committee staffers to air her concerns.” Then, in July and August 2018, she purportedly met with “staffers of one of the Senate committees investigating Russian interference during the presidential campaign.” It was then that she claimed that FinCEN “withheld documents revealing suspicious financial transactions of Trump associates that the committee had requested.” Edwards and an unnamed colleague reportedly had “lawful documented evidential disclosures of violations of law, rule, and regulations, gross mismanagement, gross waste of funds, abuse of authority, and substantial and specific danger to public safety.”

Holy fuck on a fuck fig newton, this is bad.  She went to her boss, her boss’s boss, HR, the Inspector General, the Office of Special Counsel (Different from Mueller), several Congressional staffers and at least one Senate staffer, and NOTHING?  Are you fucking kidding me?  Everyone either ignored her, blew her off, were covering shit up, or too worried about how things would look for them if the news got out that people at FinCEN sent financial records for Hilary Clinton supporters and enemies of the Kremlin to anonymous email addresses associated with Russia instead of the secured system they’re supposed to use.

Wait, what the actual fuck?

US Treasury Department officials used a Gmail back channel with the Russian government as the Kremlin sought sensitive financial information on its enemies in America and across the globe, according to documents reviewed by BuzzFeed News.

The extraordinary unofficial line of communication arose in the final year of the Obama administration — in the midst of what multiple US intelligence agencies have said was a secret campaign by the Kremlin to interfere in the US election. Russian agents ostensibly trying to track ISIS instead pressed their American counterparts for private financial documents on at least two dozen dissidents, academics, private investigators, and American citizens.

Yeah, it gets worse.  Much, much worse.

The first chapter in this extraordinary chain of communications began in late 2015, when a unit of the Treasury Department called the Office of Terrorist Financing and Financial Crimes entered into an agreement, named the ISIL Project, that called for Russia and the US to share information on financial institutions in the Middle East suspected of supporting ISIS.

Even more concerning: Documents show senior officials within the Terrorist Financing unit were communicating with Hotmail and Gmail accounts set up by the Russians, rather than using the standard secure channels.

When she found out, FinCEN’s chief of staff was stunned.

The chief of staff was responding to Treasury colleagues who were discussing with Rosfinmonitoring the outlines of their agreement to track terrorism financiers.

This is some absolutely terrible OpSec.  FinCEN has a secured communication line that everyone in the world uses to keep the documents secure.  If Jordan wants a copy of a report, they log in to the system and request it from FinCEN.  They get what they need, and that’s it.  The information stays in the system.

Email is not secure.  Even a “secured” email is very weak.  And sending an attachment to an email guarantees that no one will have control over it from that point on.  Once an email is sent, the recipient can do with it what they want.  We normally trust people to not be dicks with that mail, but every so often someone does something dickish.

The Russians are the definition of being dicks with email.  Just ask the DNC, John Podesta, the RNC, and Westinghouse.

In reference to the second point, there are some ridiculously naive people working in the Treasury Department, and that’s a best case scenario.  In a worst case scenario, they’re actively committing espionage against the United States of America.

But don’t worry, it gets worse.

Most startlingly, Russia requested sensitive documents on Dirk, Edward, and Daniel Ziff, billionaire investors who had run afoul of the Kremlin. That request was made weeks before a Russian lawyer showed up at Trump Tower offering top campaign aides “dirt” on Hillary Clinton — including her supposed connection to the Ziff brothers.

Let me break this down to show how absolutely fucked up this scenario is.

A few weeks before the June 9 Trump Tower meeting between Team Trump and Natalia Veselnitskaya’s team Rosnefmonitoring asked for and likely received sensitive financial documents for investors tied to HRC.  Around this time, Aras Agalarov hears about this from the Russian equivalent of the Attorney General, who wants to pass along this information to their asset in the United States, Donald Trump.  Aras calls Emin who contacts Rob Goldstone who emails Donnie Jr. who says “If it’s what you say it is, I love it.  Especially later in the summer.”

What am I saying?  I’m saying that it’s highly possible that someone at FinCEN or another Treasury Department team sent the Russians the “dirt” they claimed they had on HRC for their meeting with Team Trump.

In May 2017, a bomb exploded at an Ariana Grande concert in northwest England and killed 23 people. The following month, knife-wielding terrorists attacked pedestrians near London Bridge.

Because the US has access to the largest set of financial records in the world, the British turned to the Americans for help. In the first frantic moments following an attack, FinCEN’s financial databases can reveal important information about the killers, others in their network, or whether another plot is imminent.

FinCEN analysts sprang into action, racing to their headquarters in Northern Virginia to begin searching for clues on a Saturday night. But when they arrived, they discovered that everyone on duty had been locked out of the classified networks that they depended upon. They couldn’t open links from the FBI about the suspected terrorists they were supposed to be chasing and they couldn’t trace the suspects’ funding.

That night, two dozen FinCEN employees learned that the digital keys they needed to unlock classified data had expired without warning. The suspects remained on the run in London, but FinCEN was unable to help track them.

The office that administered those security keys was OIA, FinCEN’s rival department.

“We have escalated the critical problem to key individuals,” one of the whistleblowers wrote in an email, “and we still DO NOT have the ability to complete our mission or fully protect the American people.”

OIA blamed the FinCEN employees for forgetting to update their permissions. But more than a dozen FinCEN officials said they saw the incident as retaliation for their earlier power struggle. OIA had sent its own staffers an email weeks earlier reminding them to apply for new keys, but had not sent that same email to anyone at FinCEN. OIA officials blamed that oversight on “time” and “resource restraints.”

The divide grew, and made its way to Congress, where Republican Steve Pearce, chair of the House Subcommittee on Terrorism and Illicit Finance, demanded answers. The Treasury Department’s inspector general stepped in again to investigate, and concludedthat OIA had done nothing wrong — though he did acknowledge the strained relationship between OIA and FinCEN.

The whistleblowers told BuzzFeed News they have largely given up on seeing anyone at FinCEN, OIA, and TFFC held accountable for the chaos that they say has torn the Treasury apart over the past two years.

“It is very hard to measure the sum total of the damage done,” said one of the whistleblowers, a senior FinCEN official. “We are treading water right now.”

I know I’m bouncing around, but so does this article.  This final point is that the Treasury Department is an interdepartmental clusterfuck manned by a handful of petty dicks getting into a pissing contest with each other, and this pettiness and desire to not look like complete and total fuckups creates the atmosphere that everything is a clusterfuck.

There’s one good side of this article.  The authors of this piece, Leopold and Cormier, are in contact with Mueller’s team and wouldn’t release this piece unless they got the go-ahead.  If this is making the press, something big is about to drop like a Hamilton Mix-Tape.

Here’s the short, short version; Matt Whitaker asked the DOJ Ethics Advisors if he should recuse from the Mueller Investigation.  They said “Recuse.” He didn’t like that answer, so he kept bouncing around until he found someone that said yes.  He then took that yes, ran to reporters and said “See, I can haz Mueller.”  It took a couple hours for the news to come out to straighten this out.

Barr Should Be Barred

Looks like we’ll have to relive this mess in a few months.

I talked about this yesterday (Daily Check-In 12/19/2018), and I’m honestly surprised they did this.  I was expecting things to go downhill faster than an alpine skier losing an edge.

This is bad.  The only person in the United States that thinks this is a good move is Tangerine Tojo.

Gee, I wonder how this can get worse. 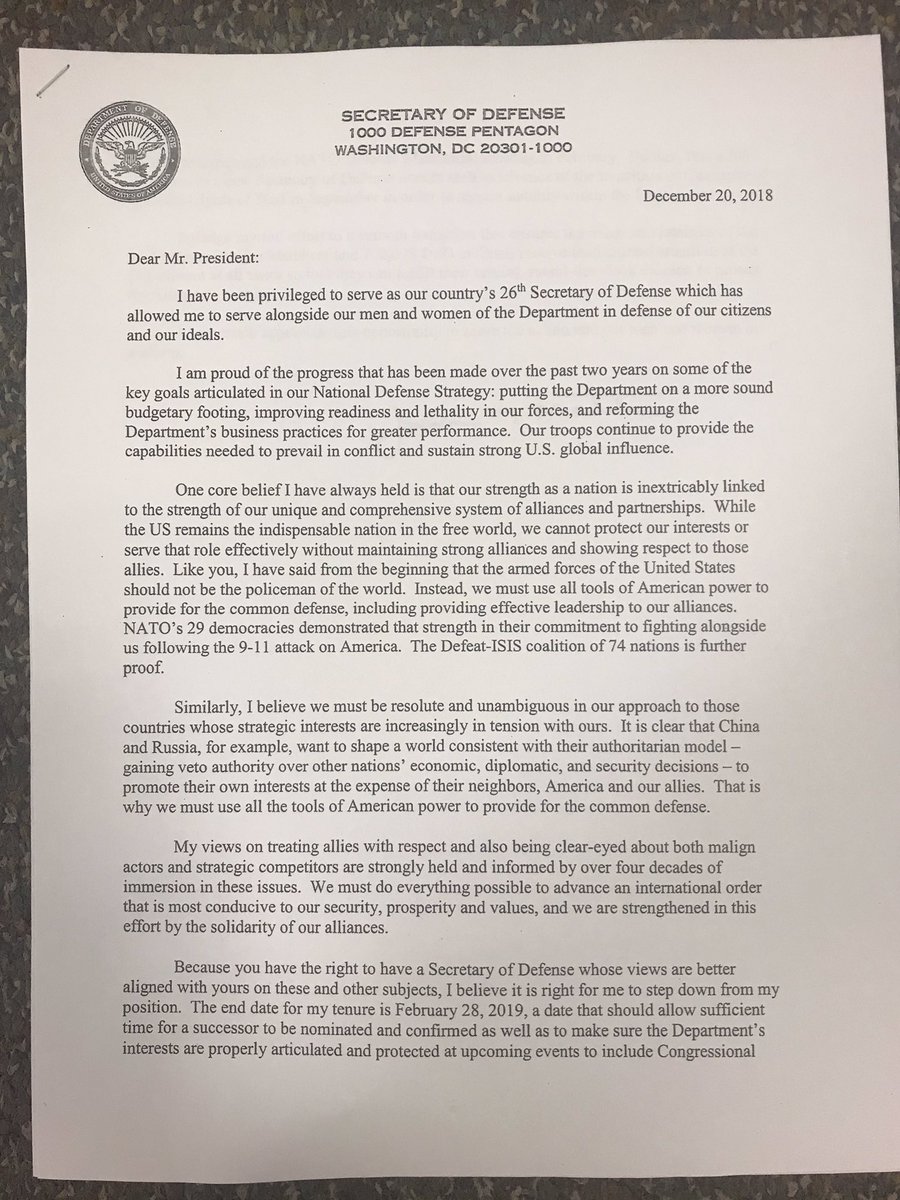 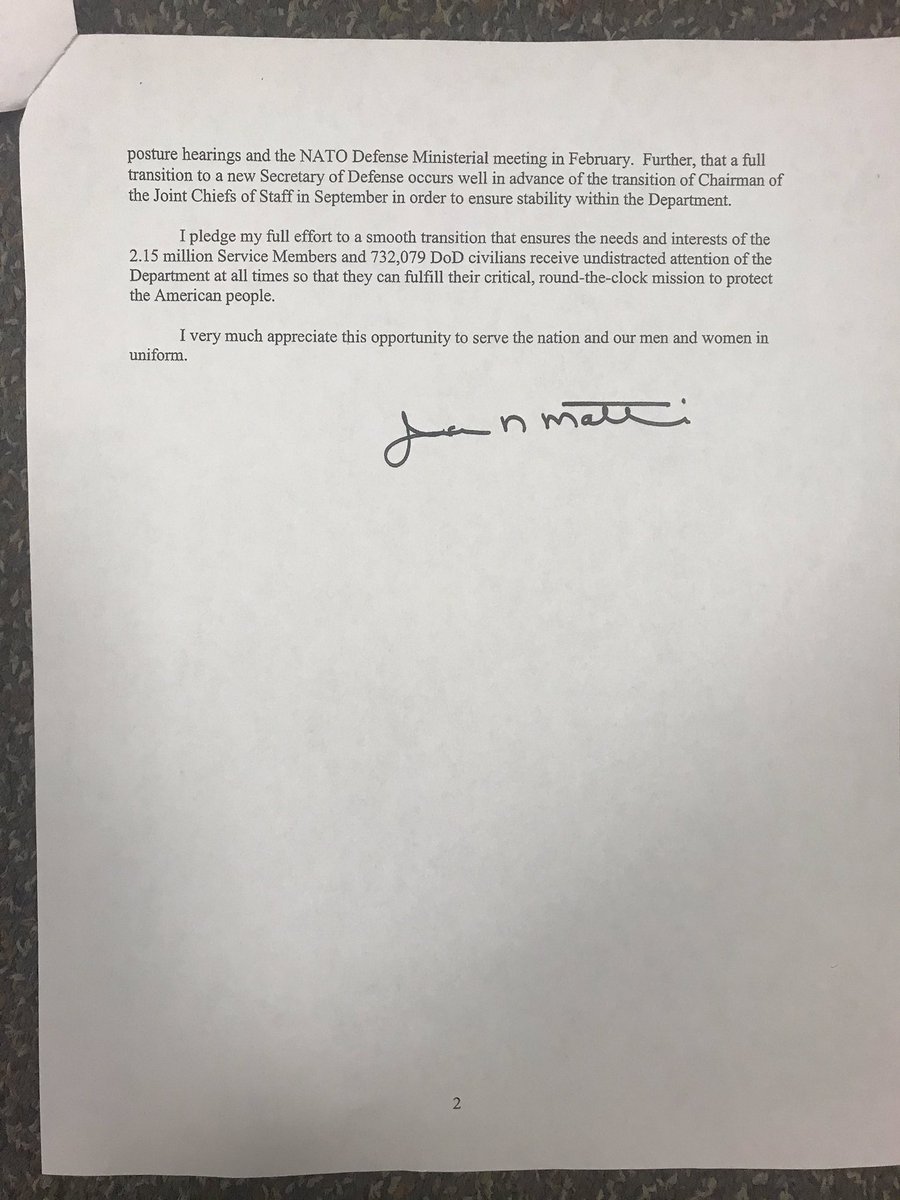 This might be the most “Fuck you and the horse you rode in on” letter I’ve seen in quite a while.

I’ll talk more about Mad Dog’s “Retirement” in the Coda.

That’s it for Thursday.  Fuck.  I’m not sure how to react with Mattis’s firing.  He was the last adult in the room.  At least, the last one who isn’t a complete sycophant.  He’s kept an air of normalcy around the White House.  No matter how nutty things got with Trump, at least Mattis was there to keep things under control.  But abandoning Syria was a bridge too far for him, and he resigned.  His letter skipped all of the “It was an honor to serve for you” and the similar platitudes.  The nicest part in that letter was “Dear Mr. President.”

On one hand, I’m worried about what will happen.  On the other hand, this might be the final straw.  If putting up with Trump is too much for a guy named “Mad Dog” then expect some pushback from the establishment Republicans.  At least those that aren’t completely compromised.