2016 interference: Project Lakhta includes multiple components, some involving domestic audiences within the Russian Federation and others targeting foreign audiences in the United States, members of the European Union, and Ukraine, among others.

. @thedailybeast @NoahShachtman last week you published an article saying NO Russia meddling in the 2018 midterms I now refer you to pages 6-12 of today’s Indictment MILLIONS OF DOLLARS MILLIONS OF SOCIAL MEDIA POST Maybe you should retract your article? https://www.justice.gov/usao-edva/press-release/file/1102591/download …

RUSSIA NEVER STOPPED They spent tens of millions of dollars in social media campaigns. The fact some in the MSM continue to minimize or flat out Report disinformation, you get MSM outlets like @thedailybeast ARE PART OF THE PROBLEM? cc @xtrixcyclex @ericgarland @LincolnsBible

FYI this case was FARMED out by SC Mueller’s office to EDVA, DOJ National Security Division That’s a data point that should NOT be overlooked and yes @LouiseMensch was

% about the social issues such as: woman’s march, nfl, nra, confederate flag…

I’ll say it again: RUSSIA is NOT our Friend Russia continues to attack our Country Every American should read this Indictment Also DOJ thanked both @facebook & @Twitter Now do you get WHY 10M files were posted by Facebook? https://www.justice.gov/usao-edva/press-release/file/1102591/download …

Sorry I meant Twitter not Facebook But I still maintain Twitter went from oh it’s just a handful of accounts with a few thousand tweets. Oh it’s 2K account’s with 1.7M To now it’s 3K accounts with 10M tweets. Bleepers, but at least they worked w/ the DOJ
Also this is the @thedailybeast article I referenced upthread. So @NoahShachtman you still sticking to “exclusive no Russian interference in 2018 mid-terms” But this Indictment blows up your article & narrative As recent as July 2018 Do better…

Also notice 1) this isn’t an indictment it’s a criminal complaint 2) which means it was some what expedited 3) the targeting of SC Mueller is also of note 4) I’d be curious to see how much Trump amplified these messages 5) WHAT WAS THE RUSH to bypass a Grand Jury @xtrixcyclex ?

Page 250 to @realBobWoodward Book Fear noted that then NSA Gen McMaster stated Trump’s tweet was clearly Russian propaganda The unanswered question is HOW did Trump get that propaganda, no? https://twitter.com/SpicyFiles/status/1040307472609800192?s=20 …

Sometimes, it’s easier to let the experts explain it, and Spicy Mic is probably the closest thing I have to an expert on criminal law.

Elena Alekseenvna Khusyaynova was charged with Conspiracy to Defraud the United States, in connection with the Russian’s continued attacks against the United States.  She is the main accountant on Project Lakhta, working for Putin’s Chef with the IRA.

If all of this sounds familiar, that’s because it is.  These are the same people that attacked the United States in 2016.  They conspired to fill social media with enticing and damaging information to both liberals and conservatives, in an effort to sow chaos.  They took advantage of everything from Trump’s actions on Immigration to the Women’s March to piss everyone off and get Americans to distrust and attack each other.

There are four things I find genuinely interesting with this.

First, this isn’t an Indictment from a Grand Jury, but a Criminal Complaint.  According to this site, the difference is that a criminal complaint comes from an affidavit from either the prosecuting attorney or investigator, while an indictment is a written report that was presented to a Grand Jury, complete with evidence and sworn testimony.  A criminal complaint can be used to get an indictment, but isn’t always necessary.

Second, this was filed on September 28th.  Daily Check-In 09/28/2018 shows that we were neck deep in the Kavanaugh Clusterfuck, but that was also the day the House Intel Committee released some transcripts(but with held Dana Rohrabacher’s), and the House Judiciary Committee threatened repeatedly Rod Rosenstein.  We were also 2 weeks into Manafort’s cooperation deal, and were learning more about the details of the money laundering that Argalov’s were engaging in.

Third, this didn’t come from Mueller’s team, but Main Justice.  Mueller’s team outsourced this to them, since the 2018 election is outside of his purview.

Finally, this complaint came with a joint statement from ODNI, the FBI, DOJ, and DHS.  Everyone is on board with this, but no mention of the White House.  Why?  Let’s look at who was attacked to get a clue.

Each series of attacks targeted whomever Trump’s enemy was at the time.  Whomever Trump was attacking, Project Lakhta attacked.  Democrats, Republicans, Celebrities, Athletes.  The attacks lined up perfectly.  Moreover, when those enemies became allies again, the attacks stopped.  When Trump was able to work with McConnell and Ryan, the memes attacked other people.  Now, there’s a chance that there was no coordination between these trolls and the Trump Administration, but they were following his lead.  Similar to inciting a riot, the crowd might not be under direct control of the ringleader, but if the ringleader says how much they hate the police and the mob throws bricks at the police station, they’re following his lead.

By the way, we’re just finding out about this now.  This was under seal for 3 weeks, and references activities and evidence from last July.  Mueller’s team is far ahead of where we’re at.

Speaking of being far ahead, we’re hearing more and more over the past couple weeks about Peter Smith, the GOP operative who committed “suicide” by suffocating himself with a bag and leaving a very suspicious note.  It looks like Smith had even more extensive connections to Mike Flynn than previously understood.

Remember, Mike Flynn is a Cooperating Witnesses.  And there’s a rumor floating around that Mueller’s team may be treating Smith’s death like a homicide, or at least a suicide under duress.

As far as Roger Stone goes, at this point I’m waiting for the hammer to drop on him.  He’s admitted to having multiple conversations with WikiLeaks and Guccifer 2.0, who has been proven to be GRU.  WikiLeaks was the go-between with Russian Intel to publish the stolen mails, and Roger knows quite a lot of information.  The only thing that might keep him out of a world of hurt is if somehow, by some galactic coincidence, he didn’t know that anyone was tied to Russian Intel, or that the emails were stolen.  The likelihood of that is slightly less than me sprouting wings out of my ass and flying to the Sea of Tranquility on the Moon.

Good news, Paulie.  Judge Ellis dropped the ten charges that were hung and agreed to a February 8 sentencing date.

Bad news, Paulie.  You’re still likely to die in jail.  Unless he gives Mueller EVERYTHING, which it sounds like he’s trying to, the only time he’ll see fresh air is on his hour of exercise time each day.

Meanwhile, Trump keeps going with the story of the day, trying to pass off the newest cover story as the truth.

Don’t buy it for a second.  They’re complicit.

Then the good people of Texas should help Heidi’s husband get a new job that pays more than $174,000 a year.  Vote Beto O’Rouke, so Heidi’s husband can afford that second home.

Quick thread about Project Veritas, the org run by convicted criminal James O’Keefe. They were spying on Claire McCaskill’s campaign and had access to voter information.

Here it is, spelled out in black and white. A hostile foreign nation working in concert with operatives on the ground here in America, working all angles

“The conspirators’ alleged activities did not exclusively adopt one ideological view; they wrote on topics from varied and sometimes opposing perspectives.” (cont’d)

“Members of the conspiracy were directed, among other things, to create ‘political intensity through supporting radical groups’ and to ‘aggravate the conflict between minorities and the rest of the population.'”

“The financial documents she controlled include detailed expenses for activities in the United States, such as expenditures for activists, advertisements on social media platforms, registration of domain names,” (cont’d)

“the purchase of proxy servers, and ‘promoting news postings on social networks.'”

Here’s maybe the worst part: “Members of the conspiracy took advantage of specific events in the United States to anchor their themes, including the shootings of church members in Charleston, South Carolina, and concert attendees in Las Vegas.”

They have a design department. And SEO. And IT. And analysis. Can you see now why it matters that sites share ad tech with Russian sites? Or with Breitbart? This is how they know what you’re clicking, reading, thinking, doing. And they use it as a weapon.

They were spending money – a lot of money – on Facebook ads as recently as this summer. Facebook, on the contrary, leads us to believe they’ve made great progress and effort in this area. Tell me again why we should trust anything that comes out of their f*cking mouth? 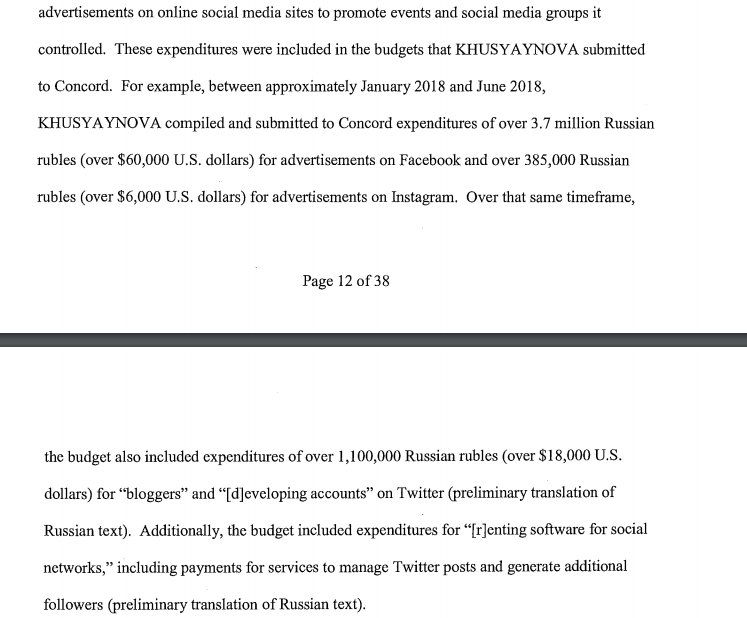 Here. This is f*cking horseshoe right here. LITERALLY playing both sides. This isn’t a THEORY. This is REAL. THEY WERE DOING THIS. And shout out to all the people before me who took copious amounts of abuse for telling the truth. 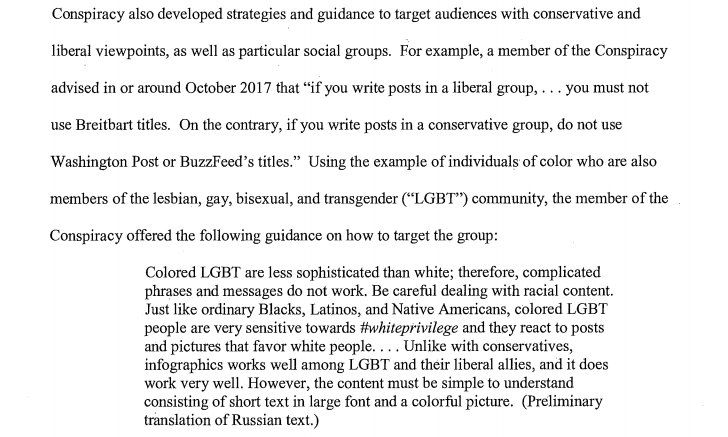 This here is what is called FRAMING.

Oh look. The old civil war bullshit. Here it is in black and white – this was a PRODUCT created for our CONSUMPTION. 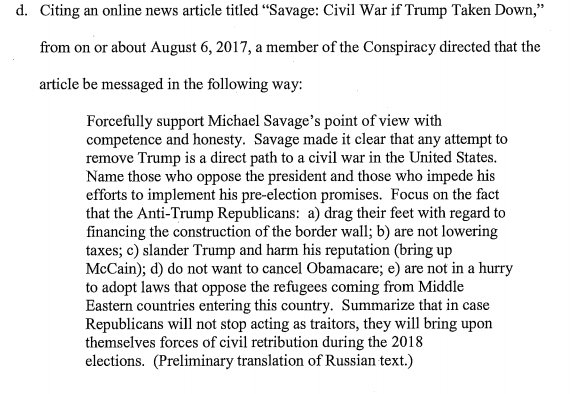 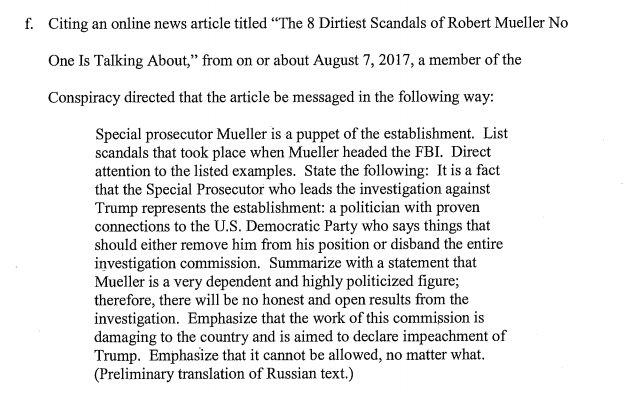 Do you get it yet? They’re using every possible issue to divide us. Why? Because our BEING UNITED IS THEIR SINGLE BIGGEST THREAT. VOTE. VOTE GODDAMMIT. 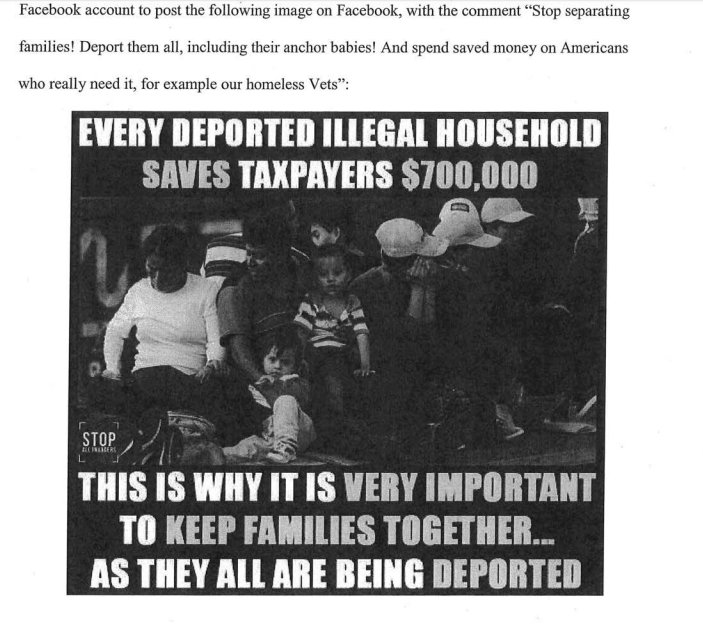 And read the whole thing yourself. You’ll be stunned. https://www.justice.gov/usao-edva/press-release/file/1102591/download …

One other important point – this was all done using our stolen metadata. If you want to do a deep dive this weekend, here is a ton of info, sources, and explanations. Please read, and once you understand, tell others.

That’s it for Friday.  I’m not sure how to handle these longer Twitter threads.  If I’m going to include them going forward, I’ll have to limit them to only 1 or 2 a day, depending on the length.  Problem is, some of them are more in-depth than others, and the provide great information.  I don’t like including all of the pictures, but copying them over is the only way to keep the info.  Plus, things have a tendency to disappear.

I’m going to add Elena to The Indicted as soon as I post this.