MUELLER HAS DETAILS OF SEYCHELLES BACK CHANNEL MEETING

According to reports, the Seychelles meeting took place in early January 2017, shortly before the inauguration, and was brokered by the Crown Prince of Abu Dhabi.  There, Erik Prince and his team (including George Nader) met with Kirill Dmitriev, a Russian banker with very close ties to Vladimir Putin, in hopes of establishing back channel communications with Russia.  This was on the heels of the December 2016 meeting in Trump Tower where Jared Kushner and Mike Flynn met with Russian Ambassador Sergei Kislyak, where Jared proposed using the comms system in the Russian Embassy to to talk to Moscow without the United States hearing it.

The Seychelles Meeting was an attempt to establish a back channel communication system between Trump and Putin, outside of normal diplomatic channels, and outside of the ability of the U.S. Intelligence Community.

Erik Prince is owner of Academi, formerly known as Xe and before that Blackwater, a paramilitary mercenary company.  He claims that he was in the Seychelles to meet with representatives of the United Arab Emirates, and just happened to bump into Kirill Dmietriev.  He had a drink with him at the bar, bullshitted with him for about a half hour, and left.

Here’s a couple things that don’t pass the smell test.

So, we have the head of a mercenary army and intelligence company/brother of a cabinet member, who’s meeting with his neighbors on a resort island, instead of down the street where they work and live, and just happens to meet a banker friend of Putin’s at a bar for a meet and greet, the same day and time he happens to be at the same bar at the same resort at the same island, and his right hand man just happens to take notes on the whole thing, even though he isn’t at the bar?

That is either a truly amazing series of coincidences, or a cover story just got blown.

This reporting kind of contradicts what Erik told the House Intelligence Committee during his testimony.

MR. SWALWELL: In 2016, which –just to summarize, your position today is that you had no official role with the campaign. Is that correct?

MR. SWALWELL: No official role with the transition.

MR. SWALWELL: No unofficial role, in your description, with the campaign. Is that right?

MR. SWALWELL: And no unofficial role, as you’ve described, with the transition.

MR. PRINCE: I’m in no official capacity at all.

MR. PRINCE: I am a citizen voter that cares about the wrong direction the country was headed in and how to change it, how to put it in what I thought was a better direction.

MR. SWALWELL: So how would you describe the role of a citizen voter who wrote policy memos for a campaign, made multiple visits to Trump Tower, made six-figure donations to the campaign, and conducted a number of meetings with the campaign’s manager?

MR. PRINCE: Someone who cares about their country.

By the way, lying to Congress is a felony.  Even in a closed hearing.  Even without swearing an oath.

TRUMP TALKED TO WITNESSES AFTER THEY SPOKE TO MUELLER 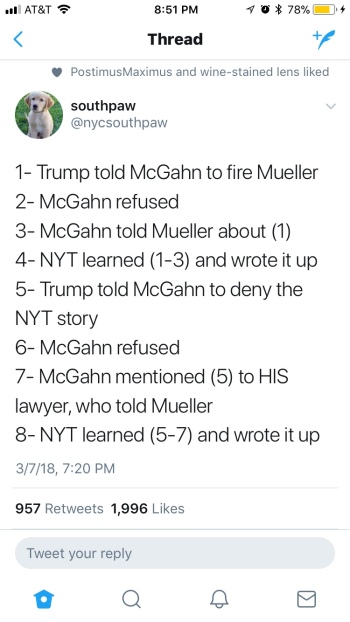 Keep in mind, this is Trump asking the witnesses AFTER they testified to Mueller, not before, so it likely doesn’t meet the legal standard for Witness Tampering or Intimidating  a Witness.  However, Mueller is circling back to ask the witnesses what Trump said and did to them.  If Trump threatened them, or tried to force them to change their stories, or intimidated them in any way, shape, or form, that’s a padddlin’.

There’s three reasons I can think of why she disclosed this to the House Committee.

Here’s the thing with email…it doesn’t really disappear.  At least, not very easily.

Hope admits she’s not tech savvy, so either she got phished, or thinks that if she says she was hacked, that can work as an excuse for all of the bad mails sent out from her account.  This argument stretches credulity to the breaking point.

This is more fallout from John Kelly’s enforcement of the new security clearance rules.  In a normal White House, one or two people not being able to get a clearance would be a major scandal.  Now, it’s not even the worst thing this afternoon.

I’m wondering if he’s going to try some type of Quid Pro Quo crap that he pulled with Qatar.  See Claude’s tweet below for details.

Attorney General Jeff Sessions is picking a fight with California that he will not win.

DeVOS DOES NOT MEET WITH PARKLAND STUDENTS DURING VISIT TO SCHOOL

According to multiple students from Twitter, she showed up, gave a speech about therapy dogs, didn’t mention gun reform, pet a doggie for a photo op, and left.

REDDIT HAS NOT HANDED OVER ANY DOCUMENTS TO INVESTIGATORS, DESPITE CLAIMS OTHERWISE

OP-ED: WHAT ABOUT SOCIALISM?

I hate to say this, so here’s a screenshot of Pace’s Twitter timeline.  I couldn’t find the original, but get ready for news about Trump Dick Pics.

The whole world is gonna get a little more nauseous. 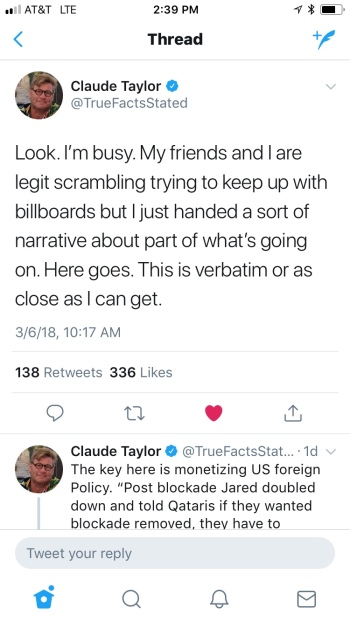 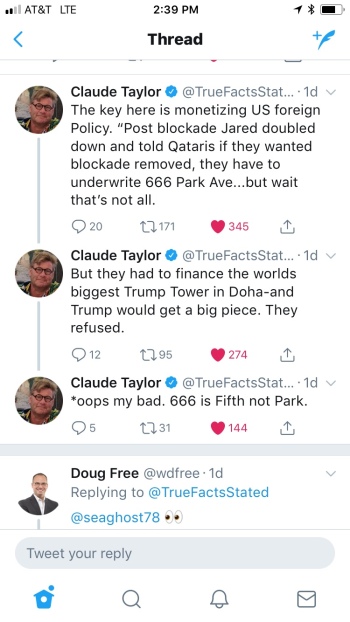 Yeah, I want to say I’m surprised, but that would be a lie.  This is exactly the kind of mob-like behavior I’d expect from them.  Offer a protection scheme to a shop owner, break their window when they say no, offer protection again, but at a higher cost, then milk them for everything.

Except, Qatar isn’t a mom and pop shop in Queens.

That’s it for today.  Well, yesterday.  Wednesday was a busy day, and by the time I could get around to writing, it was already late enough to be early.  Hopefully Thursday is more to my liking.