Here’s some of what happened over the weekend and today.

Looks like it’s the Democrat’s turn to release a memo.  Hopefully this one isn’t a dud.

The Democrats in the House Intel Committee wrote a rebuttal memo to respond to the claims made in the Nunes Memo last week, and the Committee voted UNANIMOUSLY to release it.  It will now go to the White House, where Trump will either release it like he did with the Nunes Memo, or deny it’s release.  If it gets denied, the House can vote to have it released.

If he withholds the memo, he looks like a partisan hack who is afraid of this information coming out, and since it is based off of the same classified intel that the Nunes Memo was based on, he can’t use the excuse of exposing intelligence.  He can give the FBI a chance to redact what they need to, but he didn’t do that with the Nunes Memo, either.

If he does release it, then it shows that the Russian Investigation has a lot more fire to it than smoke, and each and every claim that Nunes made will be blown apart like a goat stepping on a landmine.

The Dow Jones just had the largest single day drop in its history, and is down over 8 percent since Friday.

Two days of historic drops is something to keep an eye on, but remember that the Dow is not the Economy.  It is only one measure of how certain stocks are doing in a given day.

There’s two big reasons for this drop.  First, Trump’s new pick for the Fed, which just assumed the office, has signaled that she wants to increase interest rates faster than previously expected.  This is causing brokers and day traders to move their money from stocks to bonds, as the bonds will produce more money over time, and are more stable than stocks.

Second, this is a side-effect of the GOP Tax Plan.  Most of these corporations took place in a stock buyback program with the savings they made with the tax plan.  Sure, some of them gave bonuses to employees, but that was nothing compared to wha they gave to their shareholders.  This buyback created a spike in stock values, which I hypothesize created a mini-bubble in stock prices.  Once these buybacks were done, there was nothing to keep these values up.  Hence, the bubble burst.

Of course, that doesn’t stop the media or people who think they know what they’re doing from proclaiming doom and gloom.

JESUS FUCKING CHRIST, I WAS KIDDING!!!  I didn’t mean for that to be taken literally.  SMH.

Yes, I’m old enough that I had to look up what SMH meant.

REACTIONS AND FALLOUT FROM THE NUNES MEMO

This memo fell flatter than me trying to do a Triple Lutz.  That’s an ice skating thing, and considering the last time I ice skated I almost lost my thumb from being so clumsy, just imagine a middle-aged out of shape guy with no balance trying to jump, spin, and land.

This was Paul Manafort’s Hail Mary move.  If he could show that the investigation was illegal, then the 10 charges he’s looking at could be dismissed.

Instead, if he’s found guilty, he’ll spend the rest of his life in prison.  And this is BEFORE the espionage/treason/war crimes charges.

‘I HOPE THIS IS AN INSTANCE OF FAKE NEWS’: FBI MESSAGES SHOW THE BUREAU’S REAL REACTION TO TRUMP FIRING JAMES COMEY

This is from Ben Wittes at Lawfare Blog.  His work doesn’t get a baby cannon boom.

On June 22, 2017, Wittes made four FOIA requests. One of them sought communications to the workforce from the senior FBI leadership regarding Comey’s firing. Another sought communications on the topic from all the assistant directors and special agents in charge at the FBI’s many components and field offices to their respective teams. When the FBI did not respond in a timely manner, Wittes sued—represented by the folks at Protect Democracy—stating that his purpose was “to show conclusively that President Trump and his White House staff are lying about career federal law enforcement officers, their actions, and their attitudes”:

Over the weekend, we received 103 pages of records responsive to Wittes’s first two requests—messages from FBI leadership around the country and across the bureau regarding the firing of Director Comey. The bureau identified 116 pages of responsive material and withheld only 13 pages, so this material constitutes the overwhelming bulk of communications to staff on the subject of the firing.

What does it show? Simply put, it shows that Ellingsen nailed it when she described a reaction of “shock” and “profound sadness” at the removal of a beloved figure to whom the workforce was deeply attached. It also shows that no aspect of the White House’s statements about the bureau were accurate—and, indeed, that the White House engendered at least some resentment among the rank and file for whom it purported to speak. As Amy Hess, the special agent in charge in Louisville, put it: “On a personal note, I vehemently disagree with any negative assertions about the credibility of this institution or the people herein.”

This was part of what he called “the nicest FOIA request ever made to the FBI.”  They gave him 103 pages of information to prove that President Trump lied about his excuse that the FBI was in turmoil before he fired James Comey.

This came in from Law and Crime, formerly Lawnewz.

Mike Flynn’s sentencing has been postponed due to upcoming events.  If he had given them everything, and he was no longer of any use, he’d be in jail right now.  Instead, he’s giving Mueller everything and then some.  I wouldn’t be surprised if he testifies against one of the “bigger fish.”

In a speech today, Trump used language straight out of 1930’s Germany…again.

Considering that his only form of being able to handle criticism and self-doubt is through projection, one can almost guess what’s on his mind. 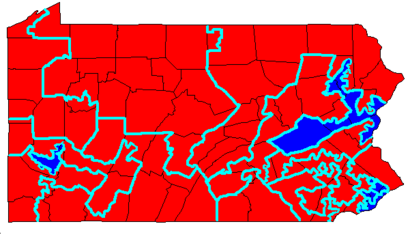 And here’s what it could look like, if it were drawn fairly…

Pennsylvania has 800,000 more registered Democrats than Republicans, yet Republicans hold a 13-5 advantage in the House.

RUMOR MILL:  THE ONCOMING STORM AND THE CRAZIEST GAME THEORY

From the Rumor Mill, talk about a RICO investigation against the GOP is picking up steam, and possibly even some MSM chatter.  A lot of talk about money laundering is coming up as well involving Trump’s properties, especially his golf courses.  He has a bad habit of suing to get property tax bills lowered after initial claims of how much his property is worth.  Not necessarily evil or criminal, but damn peculiar.

The crazies thing I’ve seen today is something I’ll go into far greater detail about later, but it is the second craziest thing I think I’ve thought since this whole mess began.  The craziest being The Russian Hypothesis, Version 0.1, which is due for an update to include what I’ve learned about Bill Browder and the Magnitsky Act.  The money part makes everything fall into place.

Today’s crazy came from Eric Garland, and was the natural evolution of a previous conversation.

What if Trump was allowed to win?  What if, even knowing about the Russian interference, the criminal behavior, and all of the other nasty shit that Trump did, someone held back on purpose to let him win, knowing that once he was in power, he would expose himself, his comrades, his co-conspirators, and anyone who could benefit from his criminal empire?

I’m not saying that happened, not by a long shot.  And I refuse to pull the “look on the bright side” until that traitorous ape is away from the nuclear weapons, but I’ve thought about this for a while.  Trump is the symptom of global criminal corruption, not the root cause.  He’s the mole that gets you in the doctor to get a checkup.  The corruption is the cancer.

Two can play this game.

Justice is slow, plodding, and thorough.  But when she shows up, she rains down on her enemies.

The forecast calls for showers of justice for the foreseeable future.

That’s it for today.