Monday.  I wonder if anything happened over the weekend…

This is like the sequel to the Panama Papers.  I even joked about that yesterday.  But this could be even bigger for US Politics.

Wilbur Ross, the Secretary of Commerce, and one shady muthafucka, did not divest himself from all or his assets before taking his cabinet position, nor were they placed into a blind trust.  One of those assets, owned by him through four shell companies each named with his initials, is a shipping company called Navigator Holdings.  It is a shipping company that specializes in transporting oil and natural gas across the world.

Ross owns a share of this company. As does Kirill Shamalov, Russia’s youngest billionaire.

Never heard of Kirill?  What about his wife Katerina Tikhonova?

Still not ringing a bell?  Her maiden name is Katerina Putina.

Still not making sense.  Ok, Russian names are hard.  Here’s a hint.  Women in Russia often add an a to their last name.  So, take Putina, and drop the a, and you get…

If he just had some shares, that wouldn’t be so bad.  But he owns a large percentage of the company, covered it up with 4 shell companies, and DID NOT DISCLOSE THIS TO THE SENATE DURING HIS CONFIRMATION HEARING.

He’s trying to hide this.

Yuri Melner is a Russian billionaire and tech investor.  He invested $191 million in Twitter, and over $1 billion into Facebook at their IPO, propping up their valuation enough for them to get through some lean years.

It turns out it wasn’t his money he invested, but that of the Russian Government.  The money was given to him from government owned banks like VSB, and they received that from various Oligarchs and government bodies.  Milner than took that money, and invested it in the tech giants before they were the giants they are today.

By the way, Yuri is good friends with Jared Kushner.  Let that sink in.

MUELER HAS ENOUGH EVIDENCE TO PROSECUTE FLYNN, HAS A PLAN TO DEAL WITH POTENTIAL PARDONS.

And his son is just as fucked.

Their only chances at not receiving the death penalty is to cooperate with Mueller, or hope for a pardon.  Of course, Mueller has a plan for Pardons.

Expect some concurrent charges to come from multiple states when Mueller is ready to drop the hammer on Flynn.

There is the chance that he is cooperating.  I’ll explain that later on.

Might not be an indictment, but at least it could get her out of office and prevent some of the damage she could cause.  Secretary of Education Betsy DeVos, a member of the Prince family and brother of Erik of Blackwater fame, is reportedly looking for a way out of her cabinet position.

Supposedly, she’s pissed at having to perform her job, is not liked in the Department of Education at all, can’t play politics, and doesn’t like the fact that she’s not treated like a queen.

I still fully expect her to end up under indictment at some point.  Remember the Alfa Bank/Trump Tower server connection?  They were incorporated with a third sever, located at Heritage Health, owned by Betsy’s family.  The hypothesis goes that after the Russians hacked the voter rolls from various locations, they transmitted these databases to Trump Tower, which then connected to Heritage Health.  There, using access to national health care databases to verify identities, they would modify the data, like changing addresses, or middle initials, or change the zip codes of registered Democrats and Independents in strategic locations.  Then, that info was transmitted back to Trump Tower, where it was then handed off back to Alfa Bank.  From there, the hackers could upload the new data, overwriting the old with little to no notion that they were ever there.

GEORGE PAPADOPOULOS MAY HAVE MET PUTIN IN GREECE

Check this out. Screenshot is below in case it disappears, along with a picture of him with the Greek President Prokopis Pavlopoulos This photo was reportedly taken in late May, on or around the 27th.  Vladimir Putin was Was in Greece at this time.

Independent Reporter put the pieces together on this one. 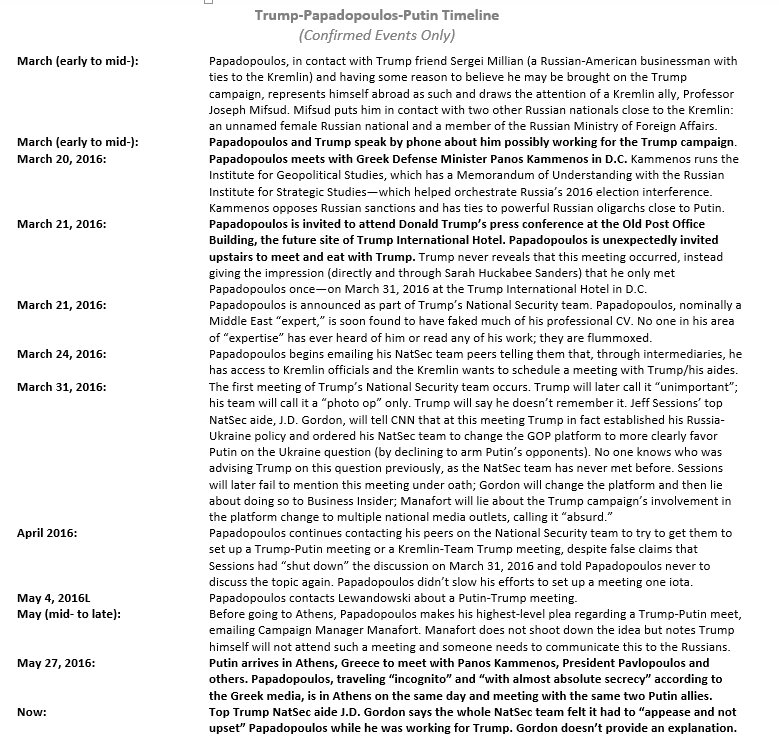 Russia is trying to screw with the Scotland Independence vote. At this point, I can’t say I’m even the slightest bit surprised.

Trump Jr. offered to “review” the Magnitsky Act if his dad were elected President, according to Natalia Veselnitskaya.

I’m not sure what’s more fucked up.  That this conversation took place, that Diaper Donnie was dumb enough to release the email evidence to the world, that I’m willing to believe the Russian Lawyer/KGB/FSB Agent, or that the Russian Lawyer and Spy has built a better reputation during this story than the namesake of the fucking President, or that this isn’t even the biggest story of the day.

Another gem from the Paradise Papers.  Leonid Mikhelson owns a plane in the United States, even though he’s under sanctions, and not allowed to enter the U.S., let alone have a pilots license.  Thanks to the Bank of Utah setting up a trust, he was able to purchase a luxury jet.

OTHER STORIES:  ANOTHER MASS SHOOTING, TRUMP IN ASIA, POTENTIAL WAR IN THE MIDDLE EAST, AND HOT TAKES FROM THE RUMOR MILL

There was another mass shooting over the weekend, this time in a Texas church.  I’d make the joke about “thoughts and prayers”, but it’s very low hanging.  Of course it’s in bad taste, but when has bad taste ever stopped me from telling a joke?

A ballistic missile was fired at Riyadh, Saudi Arabia over the weekend, and the Saudi’s are blaming Hezbollah.  They’re trying to start a war with Lebanon.  This is also a week after Jared Kushner visited Saudi Arabia, and several government members that have pushed for more democratic reforms were either arrested or expelled from the country.  I’m not sure if a shooting war will break out, or if Russia will swoop in at the last minute to fill in as “peacekeepers” but I expect something bad

There has been a lot of arguing on the Rumor Mill the last couple days about Mike Flynn. I didn’t want to include this in the main section about him, since this hasn’t been corroborated by the Main Stream Media, but several Twitter accounts like Claude, Louise, John Schindler, Eric Garland, and Countercheckist, all agree that Flynn is about to be publicly indicted.  They’ve mostly agreed to the existence of sealed indictments for months, and they also agree that at some point, Flynn was cooperating with Mueller on a deal to spare his son’s life.

This is where the consensus splits.  Mike Flynn, Jr., is an asshole, and won’t keep his mouth shut.  He’s still tweeting out Russian propaganda, and has even gone after the Special Counselor.  This may have caused the deal with Mike Flynn, Sr. to fall apart.

Louise and Claude are still sticking with their original story that Flynn has flipped, and that the deal is still on the table.  Someone else, I believe John, said that Mueller pulled the deal a month or two ago after several warnings.  Yet another member claimed that the deal was pulled, but then re-extended recently.

If I had to guess, I’d say that the third is pretty likely.  Mike Flynn has been very quiet, aside from one press conference announcing his legal fund.  Even if he flipped, he’d still need a lawyer, and they get expensive quick.

By the way, Countercheckist did another one his FEATHERS tweets, saying that “FEATHERS13 is cleared for takeoff, with thermonuclear payload.”  Attached was a gif of a B-2 Stealth Bomber taking off.  Last time he did one of these was a couple weeks ago on October 3rd, for FEATHERS11 and FEATHERS12. He retweeted it as the Manafort/Gates/Papadopoulos story broke.  I think this is his way of being cute and saying something big is coming.  I’m going to say he’s referring to Flynn as FEATHERS13.  Taking him down would almost guarantee the end of Trump’s Presidency.  Flynn can deliver everyone in the administration on a silver platter, and would force Trump to try to use his pardon power to get out of this, which could be even worse for Trump.  Trump will try to fire Mueller at some point, but even that will backfire.  Mueller has a deadman’s switch built into this whole operation.

The Washington Post has the Mayflower Hotel Tape, where Donald Trump explicitly asks Putin and the Russians for help.

Shit’s bout to get crazy like the cat lady.

That’s it for today.

EDIT:  The Carter Page Transcripts just came out. Never speak to Congress without a lawyer.  Even a bad one wouldn’t let their client go on like this.