The House Ways and Means Committee has begun the process of acquiring the tax returns for Donald Trump and his businesses.  While they were going to originally wait until the Mueller Report was released, everything that disclosed on Wednesday (Daily Check-In 02/27/2019), they decided to start this process.

Get ready for Tangering Tojo to lose his shit on Monday.

I’d almost feel bad about Roger facing jail time for not keeping his mouth shut, but he really deserves it.

In any normal universe, this would be the greatest scandal of any administration.  Here, it’s just Friday. 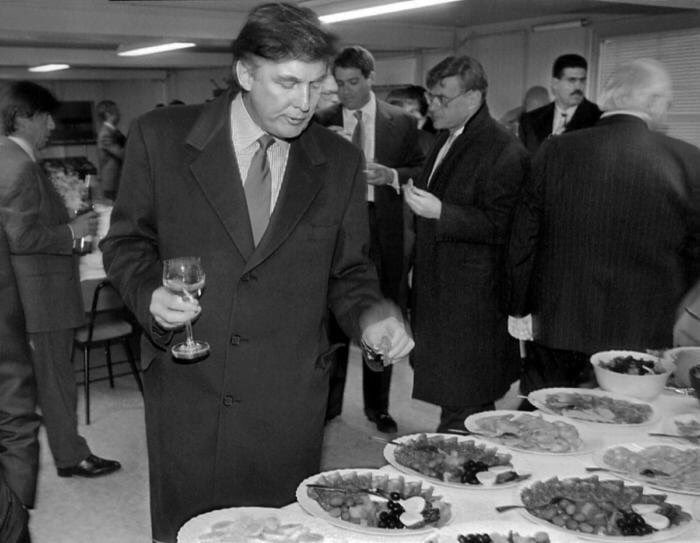 He’s the guy with the thick mustache in the top right corner.

Why was the Scotland course on his mind?

The following are a list of House and Senate committees that made significant traction in their investigations against Trump.

That’s 6 investigations all making moves on one day.  Damn.

Full article for anyone who can’t get past the pay wall.

Is Ben Bernanke the father of Alexandria Ocasio-Cortez? Not in the literal sense, obviously, but in the philosophical and political sense. As we mark the 10th anniversary of the bull market, it is worth considering whether the efforts of the US Federal Reserve, under Mr Bernanke’s leadership, to avoid 1930s-style debt deflation ended up spawning a new generation of socialists, such as the freshman Congresswoman Ms Ocasio-Cortez, in the home of global capitalism. Mr Bernanke’s unorthodox “cash for trash” scheme, otherwise known as quantitative easing, drove up asset prices and bailed out baby boomers at the profound political cost of pricing out millennials from that most divisive of asset markets, property. This has left the former comfortable, but the latter with a fragile stake in the society they are supposed to build. As we look towards the 2020 US presidential election, could Ms Ocasio-Cortez’s leftwing politics become the anthem of choice for America’s millennials? But before we look forward, it is worth going back a bit. The 2008 crash itself didn’t destroy wealth, but rather revealed how much wealth had already been destroyed by poor decisions taken in the boom. This underscored the truism that the worst of investments are often taken in the best of times.

Mr Bernanke, a keen student of the 1930s, understood that a “balance sheet recession” must be combated by reflating assets. By exchanging old bad loans on the banks’ balance sheets with good new money, underpinned by negative interest rates, the Fed drove asset prices skywards. Higher valuations fixed balance sheets and ultimately coaxed more spending and investment. However, such “hyper-trickle-down” economics also meant that wealth inequality was not the unintended consequence, but the objective, of policy. Soaring asset prices, particularly property prices, drive a wedge between those who depend on wages for their income and those who depend on rents and dividends. This wages versus rents-and-dividends game plays out generationally, because the young tend to be asset-poor and the old and the middle-aged tend to be asset-rich. Unorthodox monetary policy, therefore, penalises the young and subsidises the old. When asset prices rise much faster than wages, the average person falls further behind. Their stake in society weakens. The faster this new asset-fuelled economy grows, the greater the gap between the insiders with a stake and outsiders without. This threatens a social contract based on the notion that the faster the economy grows, the better off everyone becomes. What then? Well, politics shifts.

Notwithstanding Winston Churchill’s observation about a 20-year-old who isn’t a socialist not having a heart, and a 40-year-old who isn’t a capitalist having no head, polling indicates a significant shift in attitudes compared with prior generations. According to the Pew Research Center, American millennials (defined as those born between 1981 and 1996) are the only generation in which a majority (57 per cent) hold “mostly/consistently liberal” political views, with a mere 12 per cent holding more conservative beliefs. Fifty-eight per cent of millennials express a clear preference for big government. Seventy-nine per cent of millennials believe immigrants strengthen the US, compared to just 56 per cent of baby boomers. On foreign policy, millennials (77 per cent) are far more likely than boomers (52 per cent) to believe that peace is best ensured by good diplomacy rather than military strength. Sixty-seven per cent want the state to provide universal healthcare, and 57 per cent want higher public spending and the provision of more public services, compared with 43 per cent of baby boomers. Sixty-six per cent of millennials believe that the system unfairly favours powerful interests.

One battle ground for the new politics is the urban property market. While average hourly earnings have risen in the US by just 22 per cent over the past 9 years, property prices have surged across US metropolitan areas. Prices have risen by 34 per cent in Boston, 55 per cent in Houston, 67 per cent in Los Angeles and a whopping 96 per cent in San Francisco. The young are locked out. Similar developments in the UK have produced comparable political generational divides. If only the votes of the under-25s were counted in the last UK general election, not a single Conservative would have won a seat. Ten years ago, faced with the real prospect of another Great Depression, Mr Bernanke launched QE to avoid mass default. Implicitly, he was underwriting the wealth of his own generation, the baby boomers.

Now the division of that wealth has become a key battleground for the next election with people such as Ms Ocasio-Cortez arguing that very high incomes should be taxed at 70 per cent. For the purist, capitalism without default is a bit like Catholicism without hell. But we have confession for a reason. Everyone needs absolution. QE was capitalism’s confessional. But what if the day of reckoning was only postponed? What if a policy designed to protect the balance sheets of the wealthy has unleashed forces that may lead to the mass appropriation of those assets in the years ahead?

That’s it for the last few days.  It’s been crazy, and it’s gonna get crazier from here on out.  Monday will bring new action from the Judiciary committee, and some amazing reporting about Fox News knowing about the Stormy Daniels affair before the election.