Alleged Russian agent Maria Butina is asking the judge to set a change of plea hearing, and pitched several days this week. “The parties have resolved this matter” 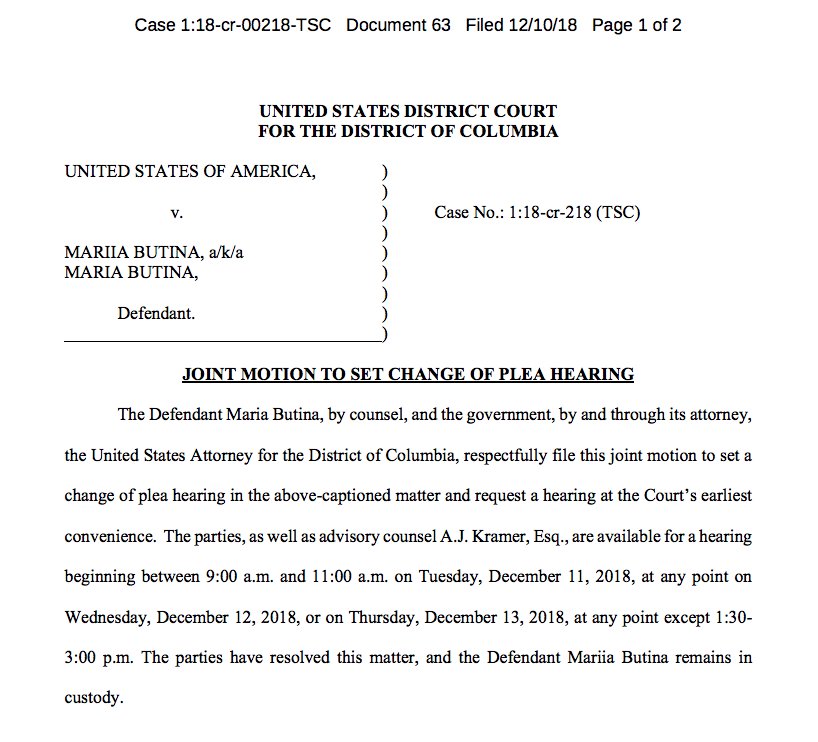 Butina pleaded not guilty at her arraignment in July. She was indicted on two counts: acting as an agent of a foreign government without notifying the US govt, and conspiring to do that. She’s been in jail this whole time:

So a “change of plea hearing” would indicate she’s now going to plead guilty to something, but it may not be those two charges. We know from earlier court filings that she’s been negotiating an agreement with the govt

Federal public defender AJ Kramer is still referenced in this latest request as “advisory counsel” and we don’t have addl info on what exactly that means. But we may get more info soon: Butina’s lawyers are okay unsealing the part of last week’s hearing that was sealed 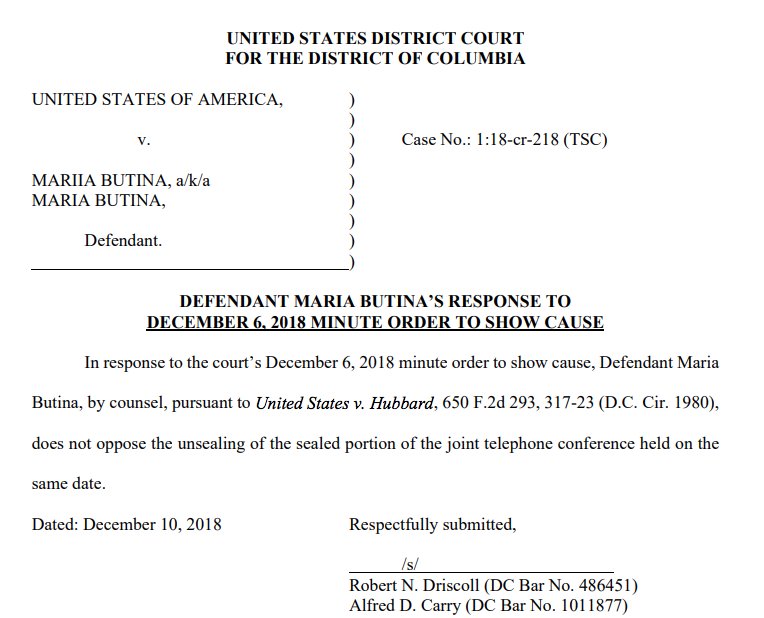 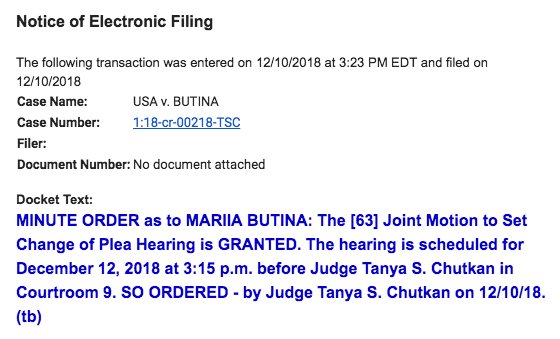 Well, ain’t that interesting.  Maria Butina, the Red Sparrow, is about to plead guilty and become a cooperating witness for the United States government.

Maria, who was arrested on Daily Check-In 07/16/2018 for being an unregistered agent of Russia.  She spent the previous couple years developing backchannel communications between Russia and the Republican Party through the NRA and Religious Right organizations.  She has met with everyone from Donnie Jr. to Congressmen, Senators, and leaders in the PAC community.  She was able to help pull enough strings to make sure that her “boyfriend” Paul Erickson called in favors to keep Mitt Romney from being appointed Secretary of State.  She helped connect Russians like Alexander Torshin, an accused money launderer, together with senior figures in the Republican Party through the National Rifle Association, in the year where they donated between $30 and $70 million to candidates from a part of their organization where they aren’t required to identify their donors.

According to reports, she’s prepared to plead guilty on Wednesday and become a cooperating witness.

If I were David Clarke, Scott Walker, Rick Santorum, anyone in the NRA or National Prayer Breakfast conference, or John Bolton, I’d be pretty nervous right now.

I talked about his yesterday (Daily Check-In 12/07/2018), but it’s good to see that someone is going after Rudy for this.

Like I said yesterday, I want to see how long this lasts.  If this survives a couple news cycles, be prepared for Individual-1 to have a lot fewer friends come springtime.

Stories this weekend lead to unmistakeable conclusion that Kushner is compromised (debt) and immoral (“weather the storm” re Saudis), but also that he’s in deep trouble. Both IC and LE communities are making that clear. Kushner is going to have one hell of a week. #No1inlaw1/

I think those who say he does good work in criminal justice reform have run their course. The president could care less. And Kushner can no longer represent a noble cause. People are complicated. But Kushner is complicit in serious criminality now against the country. 4/

That Kushner wanted Comey fired wasn’t his original sin. It began long before that. And for two years this country has been witness to Kushner covering up political, election and financial malfeasance, let alone murder. 5/

He must know options closing. He may be arrogant but the Kushners and Trumps are keenly aware of self preservation. Will the Kushner/Trump alliance hold? God knows. But Jared has been selling us (our democracy, our tax money, our security) for long enuf. Its Kushner time. 6/6

One of the things that made me stop in my tracks and do a hard reset on self-driving or even semi-autonomous cars is when someone pointed out that they could detect and prevent vehicle attacks like James Fields’s.

What we have with the rise of vehicle attacks is actually the closest real-world scenario we’ll ever get to the Trolley Problem, and the solution is still the same: fix the bad actor.

Hatch dismisses allegations of Trump crimes over hush money. Asked if he had any concerns, Hatch said: “The Democrats will do anything to hurt this president.” Told it was alleged by SDNY, Hatch told me: “Okay but I don’t care; all I can say is he’s doing a good job as President”

Hatch added this when asked if he was concerned about allegations. “No because I don’t think he was involved in crimes but even then, you know, you can make anything a crime under the current laws; if you want to you can blow it way out of proportion you can do a lot of things.”

Hatch also told me: “President Trump before he became president that’s another world. Since he’s become president this economy has charged ahead. … And I think we ought to judge him on that basis other than trying to drum up things from the past that may or may not be true.”

Grassley, the Senate Judiciary chairman, similarly dismisses the federal prosecutors’ argument: “They based it on what a liar says, so it hurts the credibility of it.”

That’s it for Monday.  To be honest, I’m tired.  Very tired.  There’s a part of me that wants to take time off, but screw that, there’s a job to do, and this week is promising to be explosive.

With the Butina plea deal, SDNY calling Trump an unindicted co-conspirator, and Flynn, Cohen, and Manafort due back in court this week, it feels like we’re heading into the home stretch.  Really, we’re maybe a third or halfway through this battle.  It’s a long battle, but it’s worth it.  That doesn’t mean I don’t want to take a few days off to rest and relax, but I’m not good at resting or relaxing.  I don’t like sitting still, laying down for too long unless I’m sleeping, or generally not doing something constructive.  That’s just how I’m wired.

I updated the Daily Check-In Collection last night.  I’ve been due to update the site and do some basic maintenance for quite some time.  I took a half-hour on that last night.  I still have a lot to do around here, but at least I got that done.