Friday, November 23, 2018.  Including Thanksgiving Thursday and the weekend.

But as the Jan. 27, 2018, date neared and Mueller provided the topics he wanted to discuss, Trump’s lawyers balked. Attorney John Dowd then fired off a searing letter disputing Mueller’s authority to question the president. The interview was off.

Notice the date of the scheduled meeting.  January 27th, 2018.  Let’s think back to what happened in the days preceding it.

Daily Check-In 01/25/2018 & Daily Check-In 01/26/2018 had one of the most important stories in the Russian Investigation break, and it was buried by a story from Maggie Haberman that was at least 6 months old.  At first, I thought that story was leaked to Maggie to distract from direct evidence of the Russians interfering in the 2016 election.  Given this new information, I’d like to update my hypothesis to include that the leak was to distract mostly from him and his team bailing on the meeting with Mueller.

Think about it.  His lawyers give a last look at the questions, know that Trump will lie and likely perjure himself, so they cancelled.  Since Trump’e ego is more fragile than a Faberge egg, he had to get the news out there that he was in charge no matter what, before it leaked that his team was afraid to answer some tough questions.  So he calls his frenemy Maggie, and tells her that he can fire Mueller any time he wants, but he doesn’t want to, but he tried back in June, and that’s the story she ran with.

Go to jail you traitorous idiot.

This next part is complete speculation on my part, but I wonder if Trump got a bad ruling against him in an appeals court, and he’s lashing out on Twitter.

Remember over the past few weeks I’ve talked about the secret sealed Mueller Grand Jury Subpoena that’s under challenge before the DC Circuit Court? (Daily Check-In 11/20/2018) Keep that in mind.

Trump’s twitter tirade against judges isn’t new.  He’s a petulant man-child who lashes out when he doesn’t get his way.  He does this with EVERY court case that he loses.  That’s not a surprise.  What’s different this time is that there isn’t an obvious case for him to scream about losing.  Sure, he’s getting his ass handed to him in several other cases, but nothing that would require him to lash out at the entire DC Circuit Court.

Here’s my speculation; Donald Trump is personally involved in the secret sealed Mueller case 18-3071, and he just received a legal beatdown.  When he asked which judges ruled against him, his lawyers told him which ones, and since at least one of them was an Obama judge.  Tangering Tojo then goes on Twitter, and here we are.

TRUMP VS. THE MILITARY

Extremist gang leader Gavin McInnes claims that he’s “quitting” the Proud Boys, then admits he’s only saying so because his jailed followers might get easier sentences

My favorite part is when Gavin McInnes says the Proud Boys don’t have ties to white supremacists and that journalists got that info from a police report. Dude half your body guards are straight up neo-Nazis, we don’t need police reports to tell us that

BREAKING: Ukraine says Russia opens fire on Ukrainian navy ships in Kerch Strait near Crimea, one of them damaged.

Ukraine’s president to convene emergency meeting of the military’s top brass amid Russia tensions near Crimea.

The spokesman for Ukrainian President Poroshenko says that the leader is convening an emergency meeting of the military’s top brass amid tensions with Russia near the Crimean Peninsula.

The Latest: Ukraine military brass to meet over Russia MOSCOW (AP) — The Latest on Russian-Ukrainian naval tensions near Crimea (all times local): 10:40 p.m. The spokesman for Ukrainian Presid… apnews.com

Remember when Paul Manafort lobbied on behalf of the Trump campaign to remove a provision from the GOP platform that would have provided lethal defensive weapons to Ukraine? You know, weapons meant to serve as a deterrent to Russian aggression? Now is a good time to remember that

And remember when Trump called on Russia to hack Hillary Clinton’s emails? You know what else he said during the same press conference? That he’d look into recognizing the occupied territory of Crimea as belonging to Russia, not Ukraine. Now is a good time to remember that. 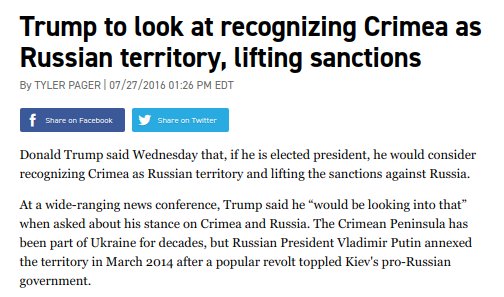 This language that Manafort lobbied to have removed from the GOP platform ahead of the 2016 Republican National Convention also called for greater coordination with NATO to constrain Russian aggression. (Ukraine is not part of NATO).

Not surprisingly, the GOP-led House intel committee dismissed this in its report. But special counsel Mueller didn’t. Per NYT’s list, Mueller planned to ask Trump: “What involvement did you have concerning platform changes regarding arming Ukraine?”

We have an outbreak of E. Coli O157:H7 which makes you vomit blood, have bloody diarrhea, and even pee blood as you lose your kidneys. It’s all because Trump overturned Obama-era rules to test our farm water. Farmers save $12 million so that we pay $108 million in medical costs.

This strain of E. Coli creates a Shiga toxin that stops our cells from producing the proteins they need to live, exactly like how the deadly poison ricin works. Cow don’t have the Shiga toxin receptor in their intestines so they can have E. Coli O157:H7 without any symptoms.

Overuse of antibiotics in our farm animals encourages the growth of this deadly strain of E. Coli over other bacteria, causing these cows to shed huge amounts of it in their feces which then contaminates the water farmers use to water our crops like Romaine lettuce.

We are a first world country yet we don’t have basic food safety because of first world problems like the overuse of antibiotics. So in essence the FDA under Trump encourages the spread of E. Coli O157:H7 in livestock and discourages testing the water contaminated by their feces.

2/ The persistent voices for what is true and good to prevail. You are wonderful.

3/ I am thankful. For music. For artistry. For truth. For story. For every crazy asshole who picked up a guitar, a brush, a pen – and knew what to do with it.

The Founders warned us about aspiring tyrants using identity politics to destroy our Republic: “The truth unquestionably is, that the only path to a subversion of the republican system of the Country is, by flattering the prejudices of the people… 1

…and exciting their jealousies and apprehensions, to throw affairs into confusion, and bring on civil commotion. Tired at length of anarchy, or want of government, they may take shelter in the arms of monarchy for repose and security… 2

… When a man unprincipled in private life desperate in his fortune, bold in his temper, possessed of considerable talents, having the advantage of military habits—despotic in his ordinary demeanour—known to have scoffed in private at the principles of liberty… 3

—It may justly be suspected that his object is to throw things into confusion that he may “ride the storm and direct the whirlwind.” — Alexander Hamilton, 1792 5/x

That last tweet by Ming was posted a couple hours before the tear gas stories broke, but right after Russia opened fire on Ukranian ships.

That’s it for the last few days.  Things were relatively calm before the Russian attack on Ukraine and the U.S. Customs Border Patrol started launching tear gas into a crowd of women and children.  If this is how Sunday rolls, expect the week to be completely nuts.

Coming up over the next few weeks, my posts might be a little irregular.  I start a new shift where I have to be in at 02:FuckingEarly.  Last year at this time of year, I missed a few days, but tried to collect them into larger days.  If that happens again this year, I might just skip and post unsorted news for those days.  Sorting out a couple hundred news stories each day takes about an hour or so.  I might just highlight a few big stories, then put the rest in a pile.  I hope it doesn’t come to that.