Friday, April 13th.  Bad day to be a Knights Templar.

THE RUSSIAN INVESTIGATION:  COHEN WAS IN PRAGUE, ROSENSTEIN AT PEACE, COHEN UNDER SURVEILLANCE FOR MONTHS, TRUMP CALLED COHEN BEFORE HEARING

Mueller’s team had a busy day.  First, let’s recap what we know…

Remember in the Steele Dossier when Michael Cohen went to Prague, or somewhere in Central Europe?  Mueller has proof that Cohen was there.  This directly ties Michael Cohen, the personal lawyer for the President of the United States, to a mission from before the election in which he was acting on orders from Trump to coordinate treasonous activities with a rogue hostile state in Russia.

Robert Mueller has the receipts.  Literally.

Of course, no matter what happens, as soon as the Steele Dossier is mentioned, people ask “what about the pee pee tape?” Wait for it.  While it’s flying around the Twitterverse, we’ll probably see it after Cohen realizes how ultimately fucked he truly is.

The 12-page  document, which appears to have been signed by Broidy, outlines his role as providing “political advocacy” on behalf of a now sanctioned Russian bank, VTB.

The deal was  apparently  dated June 12, 2014, just weeks before VTB Bank was blacklisted by the United States and European Union as a key Kremlin asset following Russia’s invasion of Crimea. Russian President Vladimir Putin is guest of honour at VTB Bank’s investor conference every year.

The document raises serious questions about whether Broidy is in breach of the US Foreign Agents Registration Act (FARA), a law that has gained prominence following the investigation of special counsel Robert Mueller into foreign meddling in the 2016 presidential election. Former Trump campaign chairman Paul Manafort and his aide Rick Gates have both been charged as a result of their work in Ukraine.

What is it with all of these high level Republicans stewarding Russian assets?

Elliot Broidy, first introduced on Daily Check-In 03/05/2018, was knee-deep in Thailand and the Middle East, joins Paul Manafort as “People Ukraine want to put in the stretching rack.”

He’s dirty AF, but don’t worry, his day gets worse.  Much worse.  Check out the GOP section for how he’s fucked.

Comey’s press tour begins, and the attacks against him have begun

Comey writes that Obama sat alone with him in the Oval Office in late November and told him I picked you to be FBI director because of your integrity and your ability. I want you to know that nothing — nothing — has happened in the last year to change my view.”

On the verge of tears, Comey told Obama, “Boy, were those words I needed to hear . . . . I’m just trying to do the right thing.”

Comey’s book will take a lot of the focus next week, and rightly so.  Expect some weird shit.

Interesting thing about the hearing was that a lawyer hired by Trump on Wednesday night was at this hearing.  There was no mention that I saw of other clients’ sending an attorney to the hearing to fight for protecting the attorney-client privilege.

Oh, and Cohen set up a hush money payment?  I’ll have more details below in the GOP section.

Ever work a job where you know you’re getting fired?  Eventually, a calmness overtakes you.  No matter what you do, you know you’re gone, so you might as well do what you need to do, and pull the Halide switch on the way out.

How are they going to make the case to fire him?  Leave it to Dipshit Cowpoke Devin Nunes (House Intelligence), Bob Goodlatte (House Judiciary), and Trey Gowdy (House Ethics). 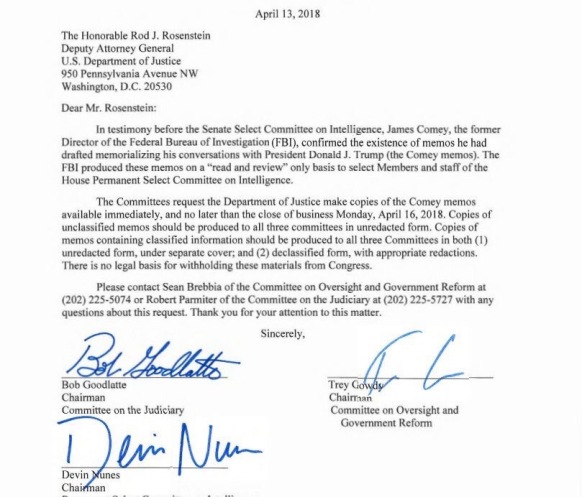 So, while the President is under investigation, the heads of the three largest committees in the House, two of which have announced their retirements, are demanding evidence from an ongoing criminal investigation in which at least one of the three is a known accomplice to the subject of said investigation?

That’s how they plan on getting rid of Rosenstein.  He can either hand over evidence to the committee heads who will give that shit immediately to Trump, or ignore it and watch as they hold him in Contempt of Congress, then Trump uses that as an excuse to fire him.

But, in the few minutes since I typed those paragraphs, I realized something…Trump is calling the shots, and he’s not aware of what Rosenstein knows.  He thinks that all they have is Comey’s memo’s, because that’s all he hears.  He wants the memos so he can attack Comey with his own notes, but Trump doesn’t realize that Mueller and Rosenstein have a fuckton of evidence against Trump, not just the memos.  So, giving them the memos might not be terrible.  Bad, but not case-destroying.

Besides, Nunes is an idiot.  He’s setting himself up for an indictment of Conspiracy to Obstruct Justice.  Not that he hasn’t sealed that shit before, but Rosenstein can use this as a trap.  He gives them the information they ask for, but not the actual info. He gives them a canary in the coal mine.  Nunes takes this, gives it to Trump, and ipso facto, proof that Nunes et al obstructed justice.

Or, Rosenstein could drop some indictments on Monday.  Especially against some Russian hackers and their American coconspirators.

Be ready, and stay frosty.

Like I said on Daily Check-In 04/09/2018, we have a Wag the Dog scenario.  However, France and Britain also took part in the strikes as well.  Let’s see if these attacks are one-off’s, or if this is the beginning of a war.

Sources familiar with the situation told the Wall Street Journal that the White House has been urging Trump’s allies to lash out at Rosenstein, so that if Trump moves to fire him it won’t look like an effort to interfere in the Russia investigation.

Ladies and gentlemen, this is what we call a criminal conspiracy.  No if’s, ands, or but’s about it.

Michael Cohen is one of the Deputy Finance Chairs of the Republican National Committee.  His shit was raided and seized by the FBI on Monday.  One of the things they found evidence of was Cohen setting up a hush money payment between a Playboy Model and Elliot Broidy.  Cohen facilitated a payment late last year between Broidy, a 60 year old married man, and a model that he knocked up and urged to get an abortion.  She was paid $1.6 million in quarterly payments over 2 years, starting last December.

Elliot Broidy resigned earlier today, but there are three things that make this a big story in my mind.

Too bad, I really liked the local hardware store that Ace bought out and franchised a few years ago.

SAY GOODBYE TO THE ECONOMY

CAN WE GET BACK TO POLITICS?

That’s it for today.  There was so much shit, I need to do a quick breakdown…

Mueller has proof that Michael Cohen was in Prague, directly on orders from Trump, to work with the Russians.

Michael Cohen organized a payoff between Elliot Broidy, who’s now under investigation in Ukraine for his ties to a Russian bank under sanctions, and a Playboy model he impregnated and urged to get an abortion.  The likelihood that this money came from the RNC is pretty damn high.

The FBI Investigation into Michael Cohen was separate from Robert Mueller’s work, but they are cooperating with each other.

Trump pardoned Scooter Libby as a “fuck you” to James Comey, whose book comes out next week.

Rosenstein knows he’s probably getting fired, and has a plan, as do thousands if not millions of Americans.

Trump is coordinating with Fox News and other Right Wing Media to create a message to push for Mueller’s and Rosenstein’s firings.

The United States, Great Britain, and France launched an air strike against Assad-held positions in Syria that are points of their chemical weapons infrastructure.

Climate change is fucking our shit up.

Instead, he’ll try to start a real one to distract from how much of a criminal scumbag he is.